The last update I wrote saw the Yankees in a peculiar position and making some seemingly bizarre moves. The outfield looked set (if a little prone to injury), the infield had a gaping hole at second base (following the trade to Miami of Martin Prado), the starting rotation looked vulnerable to say the least and missing at least one piece and the bullpen looked fine if a little over-manned.

So it really shouldn’t surprise our readers to see the Yankees making moves which primarily concern the bullpen and leaving the starting rotation and 2nd base quandaries untouched.

Let’s start with info on stuff that doesn’t effect the bullpen:

One piece of information that wasn’t available last time as I went to “press” just as the trade was announced regards the Prado / Phelps to Miami move. It seems that the Yankees will be contributing $3m of Prado’s wages to Miami. This makes a trade which seemed ill thought-out even more ludicrous than my first impression. I shall say no more about this nonsense.

And then onto the fraught issue of the bullpen.

Last time I mentioned that the Yankees had put Preston Claiborne on waivers. Shortly after we published, he was claimed by the Miami Marlins, who seem to be getting a particularly good deal from the Yankees this off-season, thus bring to an end Mr. Claiborne’s patchy stint in pinstripes.

Just after Christmas, the Yankees sent Kelley to San Diego in exchange for Johnny Barbato. Barbato had a reasonable year at Double-A  San Antonio last time out. He is a good prospect but unlikely to contribute anything to the major league picture in 2015. All the signs were of the Yankees clearing out surplus in the majors and in this instance adding an extra arm down on the farm wouldn’t hurt but I couldn’t help thinking they had got less than they had given in this one just as in the Prado / Phelps trade.

And then with the first trade of the New Year everything changed again. Outgoing this time was Manny Banuelos who was a huge prospect a few years ago but who, after surgery, had gone into decline. So it was a coin-toss as to whether to move him and if Atlanta (the signing team) were interested why not let somebody else take a look at him. The peculiarity this time comes not with the outgoing player but the incoming ones as the Yankees acquired two relievers – the very area of their roster that they had seemed content to thin out.

Banuelos – the Yankees give up on him too

The new faces are left-hander, Chasen Shreve (0-0, 0.73 ERA in 12.1 innings for Atlanta last season after a good first half at triple-A Gwinnett) and right-hander, David Carpenter (6-4, 3.54 ERA, 3 saves in 6 opportunities and 19 holds). Now getting all this for Banuelos seems a good package but Shreve is somewhat unproven and Carpenter is no more – and no less – than Kelley who we were content to give up for little. Strange. If the trades had happened in reverse order they would have made better sense but the way it worked out it just gives the impression that the guys steering the ship are going at this in a very piecemeal way. 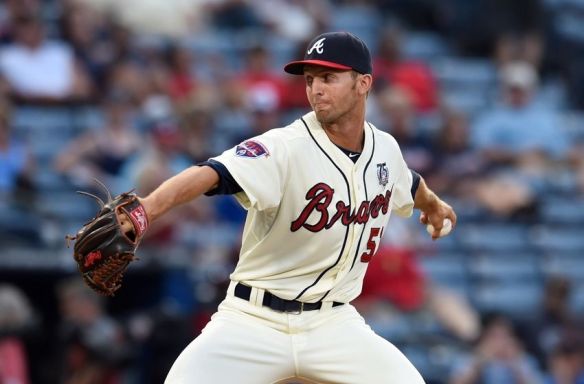 Anyway, let’s see where that leaves the bullpen roster possibilities. The Yankees are likely to carry 7 or 8 relievers from the following list:

Betances and Miller are already inked in although their exact roles remain uncertain. Rogers’ contract ensures that he’ll be given a slot. Carpenter should take over from Kelley. Warren will be in there unless they promote him to a starter role. It could be one or two of Wilson, Shreve or De Paula for the left-handed options. That leaves Whitley, Germen, Mitchell and Ramirez to battle for the scraps. The Yankees used 13 relievers last season. The 12 I have listed compared person-for-person does not give the team a stronger set of possibilities for all the tinkering that has taken place. It simply means less continuity for the fans and a more puzzling situation for writers like myself. There seems likely to be more blood-letting before opening day in a part of the squad that didn’t seem to warrant many changes.

I am not optimistic about the Yankees’ chances in 2015.