vWhat: Death of A Salesman by Arthur Miller

There are more stage directions at the beginning of Arthur Miller’s “Death of A Salesman” then there are in an entire play by William Shakespeare. And that is before you get to the first spoken line in the script. The stage directions continue throughout the play – in not such an elongated way – but still extremely detailed. Even the way the actors are to deliver their lines are specified by the playwright. It is clear that there has been a theatrical revolution since Shakespeare’s day and by Miller’s early period. The question is how that revolution is applied now to theatre nearly 70 years after “…Salesman”‘s debut

It seems quite clear that the playwright had in mind a proscenium arch theatre when he visualised how “…Salesman” would be produced. The Royal Shakespeare Theatre does not have that width. Miller seems to have imagined that the play would have as many as three scenes available concurrently.

By contrast, the Royal Shakespeare Theatre has a lot of depth. No wings to conceal scenes that could be obscured but trapdoors to have restaurants and chaise longue appear.

The question is whether the play could be adapted to work in this theatre and whether the production, direction, and design staff had the imagination to make it happen. And the answer, I think, is no.

What the RSC has produced is, particularly before the interval, a very static production where the different strata of the play happen largely in the same part of the play and because the transitions of the actors in terms of their appearances are rather limited, it is not always obvious whether what we are seeing is yesterday or today – something that has made Willy Loman or Biff Loman who they are and indeed who they have become. 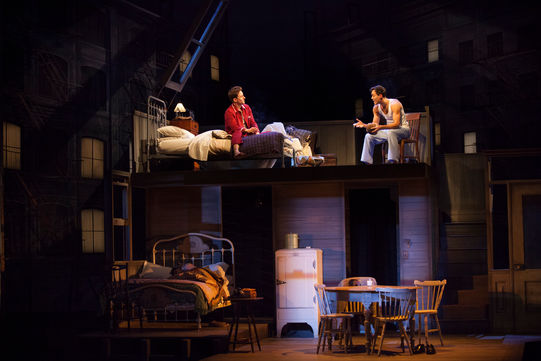 The cast is solid. Antony Sher and Harriet Walter are good. Sher handles his material well, Ms Walter is pale and cypher-like but perhaps this is how we are meant to understand her – a woman made colourless by life’s harsh experiences.

Perhaps best is Brodie Ross as Bernard who manages to put considerable distance between the character of his intimidated nerdy youth and his still only semi-confident adult who is ready to argue a case before the Supreme Court. Alex Hassell once again joins Antony Sher – he was with him in last year’s Henry IV as was Sam Marks. There is nothing too substantial in their interpretations and acting but it is alright. 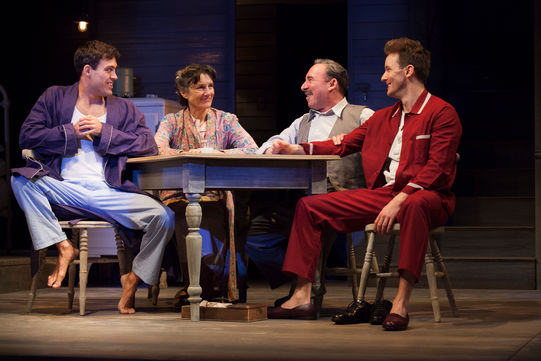 Alright. Now there’s a word to toy with when you are considering this production. The second half is better and uses more imagination in making use of the available space. But still there is something that is not quite right.

Our colleagues from New York commented that the accents were all wrong but for me, twenty years in deep in spending time on the East Coast, they were alright. And that I think is the problem. Miller’s “Death of A Salesman” is great, earth-shakingly so and this is so-so and that won’t do.

When Miller is revived it is always Crucible or Salesman or Bridge or Sons, why not be more adventurous and revive “The American Clock”, “After The Fall”, “Broken Glass” or “The Ride Down Mount Morgan” or some such. There have been so many revivals of “…Salesman” that to do it on a stage which does not lend it to authenticity when it comes to Miller’s vision is a shame and with a cast that are not completely convincing is a bit of a let-down even if this was overall a good night out at the theatre.

So the weekend when Stratford-Upon-Avon was celebrating Shakespeare’s birthday without a Shakespearean production was a perplexing one for this reviewer. Okay, but hoping for more on my next visit.