What: The New York Yankees vs the Baltimore Orioles and the Toronto Blue Jays

Stood outside Yankee Stadium on the 10th of September as the rain begins to gently fall, you realise that perhaps this is not going to go to plan. When the series with the Orioles had opened and a Yankees win meant that the lead that Toronto had in the American League East was cut back to half a game, the world seemed filled with optimism. Even when Baltimore took the next two games, things hadn’t seemed so bad – results elsewhere had gone in the Yankees favour. And after all, one and a half games behind doesn’t look so bad when the team ahead of you is just about to arrive in town for four games and anything could happen.

Couldn’t it? Well, if you look at the form and the team-sheets in the cold light of day, then perhaps not but baseball is a funny thing. Hard to predict and with a limitless number of variables. Like rain, for example. Rain that on one hand was going to break that 90-95F weather we had been having but which on the other hand was going to cause the postponement of a game which would mean that four games would have to be played in three days – and there was no real question that the Blue Jays roster was deeper than that of New York.

Especially when it came to pitching. Everyone had been saying all season what a great group of relievers the Yankees had but close examination reveals some other factors. Sure, Justin Wilson, Dellin Betances and Andrew Miller were the best of the best coming out of the bullpen but after that you started to scratch around and if you called on them too often then there was little else left. There was the exemplary Adam Warren but the Yankees were getting close to needing to use him as a starter as tired arms gave way to injury. And as he said to me just a couple of days later that this was his preferred route if he could achieve it, then that looked like the way things were going. 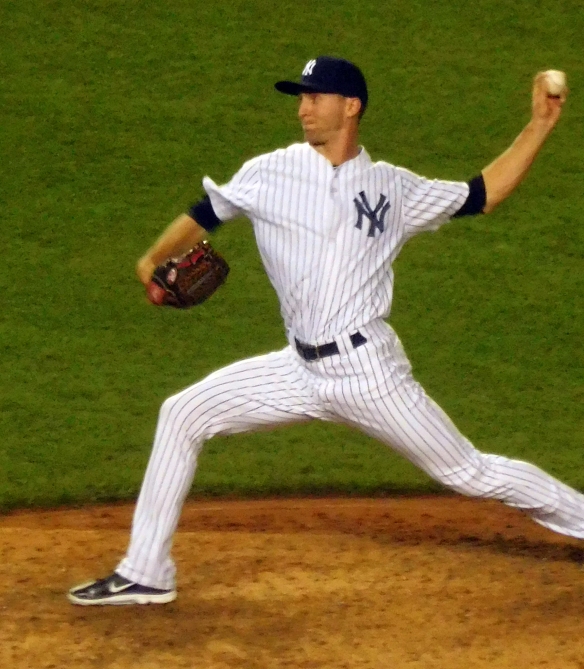 Then there was Chasen Shreve who had done so well in the first half of the season but now was obviously struggling with confidence (getting booed off the mound by your own fans can do that for you) and then a lot of less than remarkable ERAs and arms..

And the rain continued to fall…

Let’s not neglect the fact that the Yankees had seen some unexpected pluses in August. Carlos Beltran had finally got back to his best and was now leading the team in batting average.

Greg Bird had successfully filled in for the disabled-list-bound Mark Teixeira. Luis Severino had begun collecting major league wins. But with September comes the roster expansion and year-after-year Joe Girardi has shown that he can manage 25 players quite adeptly but struggles to know the best of his squad when he has to give more players time — and this year the roster had grown even bigger than usual. First there was 8 players called up and now there was more.

And the rain continued to fall… And then the announcement was made that there would be no game tonight and two on Saturday.

Friday brought the pairing which would have happened Thursday, with David Price (best in the league since mid-season) against Luis Severino (a raw rookie). What looked like a close match-up on Thursday that Price would take by a narrow margin became something else by Friday with an extra night to think on these things clearing getting under Severino’s skin. He threw (I use the word advisedly) his worst game in the majors by some margin whilst Price was Price. What this means about Severino’s big-game psychology will remain to be seen but it will give Girardi pause for thought before awarding the ball to Luis should all this result in a one-game wild-card playoff being in the Yankees’ future. First blood to the Blue Jays and a two and a half game gap.

Saturday, I was at the Stadium early (8 a.m.) for all kinds of media events and then by 1pm it was the first of the two games. Michael Pineda for the Yankees was just okay but with a great performance from Andrew Miller and good offensive performances from Headley, Gardner and McCann, the game stretched into extra innings. This was probably the last thing the Yankees needed with a second game coming. Bryan Mitchell and the aforementioned Chasen Shreve couldn’t get the outs and Jacoby Ellsbury headed deeper into a slump with the bat. By the end 5-5 had become 9-5 and everything was coming apart.

And then the rain began to fall…

And a little later this meant that out came the tarpaulin. The groundskeepers who had looked positively buoyant during the 5th innings dance to Y.M.C.A. did not now look so joyful and the second game was interrupted by a lengthy and heavy shower. Ivan Nova had struggled to control a wet ball and the wild pitch count mounted up. And when the rain really began to fall in the 6th innings and the game was halted for more than half-an-hour, the Yankees attempt at a revival came to an abrupt end. The Blue Jays headed for double figures and Nova was told by his manager that he would not be used as a starter for the forseeable future and that his one-and-two-third innings was just not good enough.

The fourth game of the series saw Masahiro Tanaka lead the Yankees to a shutout win but really now the damage was done and while this helped, it was only a little and the news that Tanaka was headed for the DL where he would join Nate Eovaldi was a bigger setback than the win was an advance.

So a shutout is always good. Seeing the look on Buck Showalter’s face when he loses to the Yankees is always good but as I headed back to Staten Island to finish my coverage of their season, there wasn’t much else to smile about. By now, the rain had cleared but it had only made the clarity of the Yankees’ shortcomings a lot more evident.