At the time of our last column, the Yankees stood at 5-8. Since then they have improved to 9-10 and they have seen Brett Gardner able to take regular at-bats and gain his first hits and RBI,  and Jacoby Ellsbury take a pitch off his wrist which has limited his participation but, in general, the roster is taking shape.

Let’s survey the pitchers and who is likely to be on that roster as March turns into April.

In Spring Training, Ivan Nova and Masahiro Tanaka have been given more starts than anyone else, but, in all likelihood, for very different reasons. Tanaka is the ace of the staff, coming off surgery and the management is trying to figure whether he is ready for opening day and until the thrashing that the Yankees took on the 23rd against Washington all seemed to be going well. In that game against the Nationals, Tanaka gave up 7 earned runs across 4 innings, which boosted his ERA for the Spring to 7.36. Nova, on the other hand, has also undergone surgery but the time of his medical procedure is now well in the rearview mirror and he has never been quite the pitcher he was before he went under the knife. In this Spring, he needs to prove himself all over again after coming perilously close to losing his spot in the rotation towards the end of last season. So far in his 4 starts, he has no decisions, and has pitched 13.1 innings for a 4.05 ERA. His worst outing was also, like Tanaka, his most recent, on the 20th against Minnesota. The two will need to do considerably better next time out – Tanaka to prove he can be allowed to go deep into the innings count, Nova that he can show that he is worth one of those crucial 5 slots. 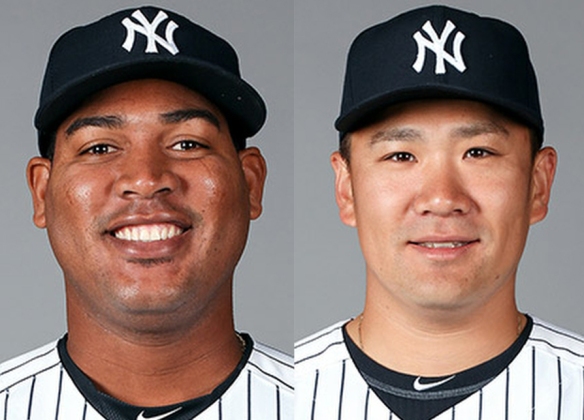 Luis Severino and CC Sabathia, who each have three starts under their belts, are also facing very different situations. Severino has already shown enough to clinch a starting spot. The 22-year-old is the young phenom of the staff and whilst his Spring hasn’t been without hitches, his 2 wins and 16.1 innings will do very nicely thank you, especially since his only weak outing came in his first Spring outing when he couldn’t find his locations. He’s looking much better since then. Sabathia, on the other hand, is the aging veteran, who ended last season weighed down with personal problems and has to wear a leg brace to keep his leg strong enough to pitch and carry his considerable girth. He has the same ERA as Tanaka and like him each appearance and the further he has gone into games has gotten a little weaker. The Yankees face several questions about Sabathia. If it wasn’t for his considerable contract ($25M for 2016 and more for 2017), the New York team might be tempted to cut him. But since they will need to get something for their money, the question is whether to make him the no. 5 starter — or possibly to carry Nova in that role and try to make something out of Sabathia as a long reliever and spot sixth starter.

Nathan Eovaldi, Bryan Mitchell and Michael Pineda have each made two starts during the Spring. Eovaldi and Pineda would seem to be guaranteed a rotation spot. Eovaldi is coming off injury and so has limited innings so far but he has not given up a run and has one win. Pineda has an ERA of 1.00 and also has 1 win. He has pitched 9 innings so far – considerably more than Eovaldi’s total. Mitchell would seem to be a shoo-in on most teams — but not on the Yankees. He has 2 wins, 0.84 ERA, 10.2 innings pitched and has appeared twice as a starter and twice as a reliever. However, on the Yankees because of their various commitments, there is every chance he will start the regular season at Triple-A Scranton to make room for the sub-par Nova and Sabathia.

The relief pitching situation is much more complicated. The chances are that either Nova or Sabathia will be given one slot and Mitchell has a chance of another.

This means that the opportunities for those who will see themselves as career relievers are a little more limited than might have been expected. On the other side of the coin, Aroldis Chapman will not be pitching for the first month because of his domestic violence suspension.

Who might be there? The pitchers who have seen most relief appearances are those who are obviously trying out for a spot as they are by no means guaranteed to be on the 25. 23 year-old, Johnny Barbato who split his time across the Railriders and the Trenton team last year, after originally being drafted by the San Diego organisation, is the surprise and has been used seven times alongside the two Nicks, Nick Rumbelow and Nick Goody. They have each pitched just over 7 innings so far with Barbato producing the best ERA of the 3 with Rumbelow the weakest.

Four players have appeared in 6 games and interestingly three of them are left-handers. Some have strengthened their case but not all. James Pazos came onto the roster in the later part of last season and came in very handy getting out a left-handed batter and then being lifted. It was the first instance for quite some time of the Yankees using someone in such a specialised job but he handled it well. He was expected to come into this Spring to be tried out for a more developed role and was expected to be a definite part of the bullpen plan especially whilst Chapman was not available. Pazos’ Spring outings are improving a little but his 5.79 ERA has somewhat moved him down the pecking order. On the other hand, Chasen Shreve who from mid-September last year didn’t look like he could get anyone out, has bounced back and has 0.00 ERA and 0.00 WHIP . You can’t ask for better than that. Tyler Olson is the third left-hander in this group and has played himself into the reckoning. The former Mariner has produced a 1.42 ERA thus far. Right-hander, Anthony Swarzak was brought in as an experienced non-roster invitee and done reasonably well up until now. He has allowed a few too many batters to get on base for the Yankees to be entirely comfortable but sometimes it has been weak defensive work behind him that has allowed those safe hits to come home. He still has time to carry the day.

Branden Pinder is another who is doing his chances no harm with a promising Spring. Last year, he split his time between the Bronx and Scranton and was inconsistent. His 2.08 ERA looks good and Joe Girardi seems to like what he is seeing.  Andrew Miller is not at his sharpest yet but is doing okay and because of Chapman’s suspension will now start the season as the closer. Dellin Betances has allowed a few hits but none of them have made it over the plate. Diego Moreno who was allowed a little time on the Yankees’ roster last season is once again struggling and it is difficult to see anyway forward for him. 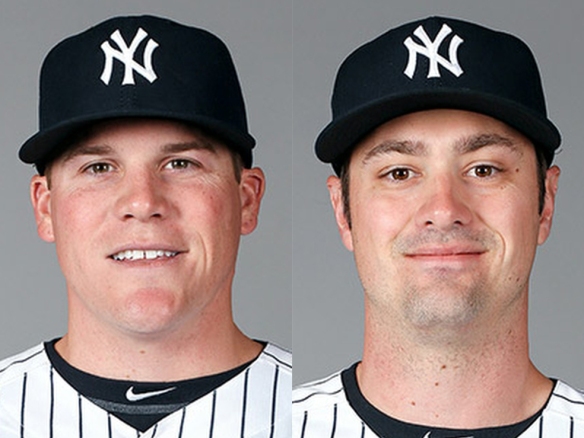 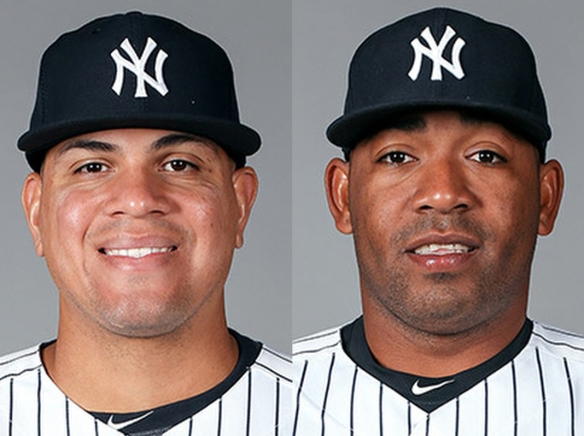 Amongst the least used players two names stand out. Kirby Yates has only played in 4 games but has produced a 0.00 ERA. Luis Cessa is pitching well. His future probably sees him eventually hoping for a spot in the rotation and the fact that he has been used solely as a reliever in these training games suggests that the Yankees brass think he is one for the medium term rather than for now.

Finally, the aforementioned Chapman is giving up less hits but more walks than Chapman. His WHIP is better than last season’s closer but their ERAs are identical – and with Miller there is not that large bag of burden hanging around just off the mound. Chapman’s a great pitcher but I still don’t think that acquisition makes sense. 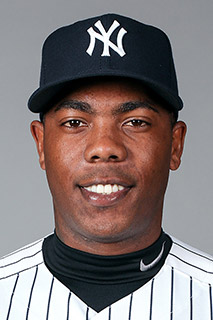 And so my guess for the pitchers?

If this has any merit then Barbato will be a real surprise. Alternatively, I think they will go with Mitchell… or Pazos… or someone. Until Chapman can finish his extended Spring Training. Then whoever it is disappears anyway.