As we pointed out in our last column, the Yankees are having a steady, productive and successful season so far. The same can be said of their pitching. With the exception of Aroldis Chapman whose struggles led to further medical examination and then to the 10-day disabled list, most everyone is living up to or exceeding expectations. Let’s look in a little more detail:

May – Quality Starters – (from L to R) Severino, Pineda, Montgomery

The Yankees have been using the same 5-man rotation since the opening days of the season. The results have been surprising. Luis Severino and  Michael Pineda, who struggled as starters in 2016, have been the most consistent. Masahiro Tanaka and CC Sabathia, who were expected to be the staff ace and the aging makeweight respectively, have either been extremely good or really quite poor depending on the outing. Jordan Montgomery had simply never played in the big leagues and nobody really expected him to be their this year either so the fact that he is there and holding his own must be a bonus for a team who were expected to have an indifferent rotation at best.

In May, Severino had two wins, 1 loss and three no-decisions and can count himself a little unlucky as his 2.88 ERA and 36 strikeouts, in a little over 34 innings, show. Pineda has a higher ERA (3.48) but more wins (3) and only 1 no-decision from his 5 starts. Montgomery lets less people get on-base than Severino (a WHIP of 1.19 compared to 1.31) but has had less run support and can only show one win for his 5 starts in the month, along with 3 losses.

Montgomery’s ERA of 4.08, however, is superior to both Tanaka’s and Sabathia’s whose inconsistency has been most confusing. Sabathia went into the month looking much the same as he had at the tail-end of April. He gave up 6 runs in 4 innings against Toronto and then took the loss in a slightly better performance at Cincinnati where he conceded 5 earned runs in 6 innings. And then somehow it all turned around. His remaining three games in the month saw him pitch 18 innings and only give up 3 earned runs. 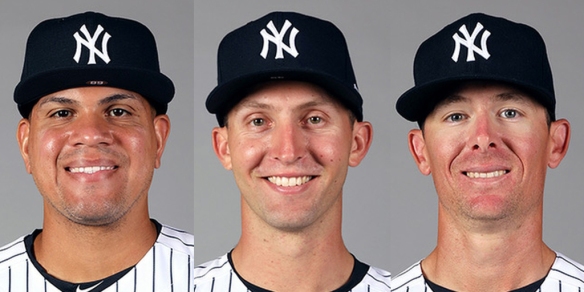 May – Reliable Relievers – (From L to R) Betances, Shreve, Clippard.

Last season, Dellin Betances was forced into the closer’s role when the Yankees traded Andrew Miller and Aroldis Chapman. Betances’ season fell apart and many wondered if he lacked the big role temperament.

This season with Chapman back on the scene, Betances was restored to the eight inning role until Chapman went on the DL with left shoulder rotator cuff inflammation. Betances was the obvious choice to take over the 9th inning and he has been phenomonal. He has collected 5 saves and maintained a WHIP of less than 1.

Chasen Shreve is another who there might have been a sizeable question mark about. In the last two seasons the left-hander has started well and then gradually got to the point where he lost sight of the strike-zone. This season, he pitched well in early April only to find himself reassigned to Scranton. He was then called up again in early May and has dominated his opponents. His ERA on the month is 0.82 and his WHIP is also below 1. Whether he can maintain this form is still a subject for much discussion and only time will tell.

Tyler Clippard has maintained his April form and is proving an excellent re-acquisition for the Yankees. The other second-time-around guy, Adam Warren had a less successful month as he found his role also changed by the Chapman injury.

Chad Green has taken up the long reliever role since his recall on May 14 and he has been very successful in his task. Averaging a couple of innings an outing, he has done particularly well when the starter has come up short and left the game early.

The final name to mention in the category of relievers who have acquitted themselves well is Jonathan Holder who is performing solidly in his second season as a Yankee.

As well as Chapman who is now taking time to rest, there have been other pitchers who have struggled. Most noticeably, lefthander, Tommy Layne who has been relegated to the role of a 1-out specialist when Girardi thinks he might fare well. The category of those struggling must also include Giovanny Gallegos, Bryan Mitchell and Luis Cessa who are splitting their time between Scranton and New York.