In July, the Yankees strengthened their bullpen by adding David Robertson and Tommy Kahnle although these moves meant they had to subtract Tyler Clippard. Then right on the deadline they strengthened their starting rotation with the addition of Sonny Gray from Oakland and Jaime Garcia from the Minnesota Twins.

Whilst it would be in August that we will see whether Gray and Garcia provide an upgrade, the arrival of Robertson and Kahnle was evidently a master-stroke especially since Clippard’s season was falling apart at the seams. 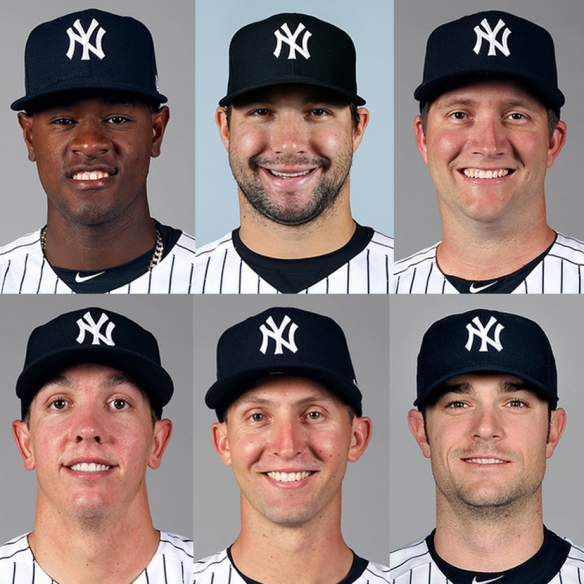 The fact that the Yankees had a higher than .500 winning percentage in July was largely down to the bullpen but some of the starters were also adept at keeping the post-season ship afloat. Most key amongst these was Luis Severino who, after a disastrous season in the rotation in 2016, has been a revelation this year. This month he averaged over 6 innings per start and came away with 3 wins, 1 loss and 2 no-decisions. His July 2.58 ERA was the best amongst the starters.

Of the other regular starters, nobody else was nearly in the same class but Masahiro Tanaka had one of his better months of the season and CC Sabathia did enough as he recovered from injury.

On the other side of the coin, Jordan Montgomery had his worst period of the season so far and the Yankees will need to be wise with him as he has never pitched in the majors prior to this season and also is beginning to approach the sort of levels of innings count that he has pitched during a complete season in the minors. His 5.90 ERA this month is something of a cause for concern.

The remainder of the starts was divided across quite a group as the Yankees struggled to cover for Sabathia who missed a turn because  of injury and Michael Pineda whose surgery means that he will not be back this year or for most of next.

Pineda’s last start saw him only pitch 3 innings whilst giving up 9 hits and Tommy John surgery was necessary. After that the Yankees looked to Bryan Mitchell, Luis Cessa, and Caleb Smith and were grateful for the All-Star break taking some weight off the beleaguered arms. Mitchell did well with only one earned run conceded in 5 innings. Both Cessa and Smith were on short stay passes in the Major Leagues – Smith on his first visit. Cessa’s start lasted shorter than one of his relief appearances in the same month! Smith’s seven innings across two starts cost him 6 runs and he clearly lacked stamina at this level.

So the new signings were sending all the right messages and as previously indicated were a huge step up on Tyler Clippard‘s recent performances which had seen him deliver a 7.71 ERA during this month before his departure for new pastures. Clippard seems like a nice guy and he must be gutted to go from a playoff contender to the dead-in-the-water Chicago White Sox who are undergoing a massive housecleaning.

But how about the rest of the bullpen? Well, Adam Warren continues to dominate in his second stint in pinstripes and one of the few to match him is the emergent Chad Green who is doing tremendously well. Both had an ERA of 1.59 in July and WHIPs that were sub 1. Excellent stuff.

Chasen Shreve did well after some disappointing performances in June but was nevertheless relocated to Scranton in the middle-of-the-month. Again, he did well on his return. He is a conundrum.

Aroldis Chapman and Dellin Betances who are meant to be the backbone of all this continue to be inconsistent and caused more than a few heart flutters this month.

Among those who came and went, Jonathan Holder and Ben Heller did well and Domingo German struggled. Performance aside, their fate was the same and they split time between the majors and triple-A.

Finally, there was Tyler Webb who was great in June and terrible in July and then shipped out to the Milwaukee Brewers in exchange for first base prospect, Garrett Cooper.