What: Countdown to Ecstasy ++

(In September, I was commissioned by a management group to travel to the USA and cover Steely Dan’s shows at the Beacon Theatre in October. Once I am allowed to, I am expanding the articles I wrote to lengthier reviews which will appear here and elsewhere. My last piece was on the “By Popular Demand” night (which was really more like a “Greatest Hits” show). In this next group of writings, I will concentrate on the performances that were based on individual albums – concentrating on the songs that were not in the earlier performance, beginning with the “Countdown to Ecstasy” night)

On my way out of the “By Popular Demand” show, someone commented “Steely Dan may not be the best live band in the world – but if they’re not I’d sure enjoy seeing some of the others”. It’s right. It’s hard to imagine a tighter, more capable band 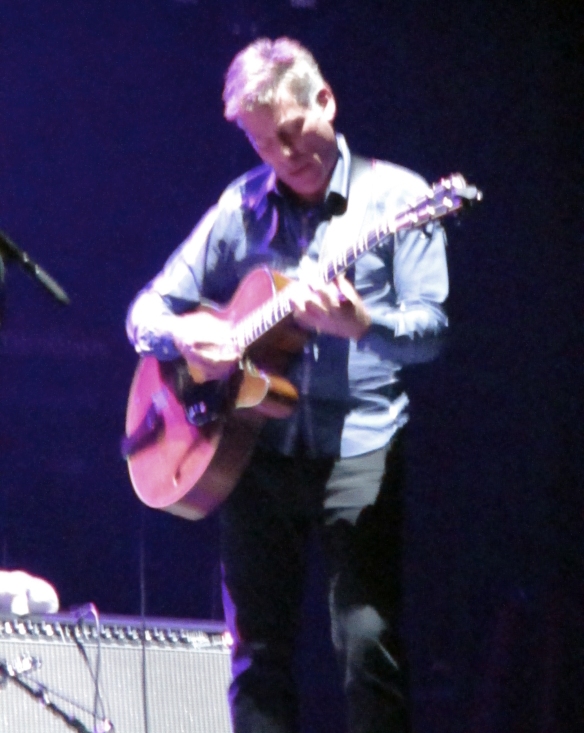 After the performance of the Peter Bernstein Trio, there was a very quick turnaround in the stage set-up and the main performance began immediately. Tonight, there wasn’t a jazz instrumental to lead into the main set but rather the show began with an exuberant rendition of the first track on “Countdown to Ecstasy”: “Bodhisattva”. It’s never been my favourite Dan track but it sure is a good way to get the audience warmed up and going.

“Countdown to Ecstasy” was the first Steely Dan album to feature in places a fuller complement of horns and therefore lends itself well to the outfit on stage tonight. But after Bodhisattva we are going, as the album does, into much more gentle territory as the band turns its attention to “Razor Boy”. The instrumentation is led by Jim Beard and Donald Fagen on keyboards with percussion provided by the horn players and Keith Carlock behind the kit. The vocals surprisingly are provided by the three voices of the Danettes – Catherine Russell, Carolyn Leonhart and LaTanya Hall. I’m kind of ambivalent about this. Donald Fagen’s vocal on this song on the original record is one of my favourites but the ladies handle it well. After the opening verse and chorus, we are treated to a Jim Pugh solo. The arrangement is very minimalist and quite charming after the rush and haste of a full-on opener. In the remaining section of the song, the vocals blend with the horn that winds its way around, betwixt and between them. Just great. One of the highlights of the night.

A similar opening of keyboard and percussion leads into Boston Rag but this time the horns and the guitars are right in there too from the beginning to support Fagen’s vocal. Donald may have been singing “this song (since) Lonnie came alive” but it sounds just as good now as it ever did. The Danettes took a more prominent role in the second verse and Jon Herington plays the familiar guitar riff to lead us into the second chorus. After that chorus, there is more biting and fluid guitar work from Herington and Connor Kennedy, Tremendous. Steely Dan may not play this and Razor Boy very often, but they don’t sound under-rehearsed — and the guitars take the song to places far beyond where the original was able to go, before we head into the third chorus.

There is more to come in the way of the songs you will only know if you own more than a “Steely Dan – Greatest Hits” album as it is time for “Your Gold Teeth” which relies on the combination of keyboards, guitars and the 4 vocalists. Fagen here has that snarling, snidey edge to his voice which he uses in his best moments. There are those who say his voice is not what it used to be. It isn’t, it’s changed, and the new voice is just different – perhaps even more interesting. The tenor sax and Jim Beard’s piano lead us among the solos this time and the music is fleshed out and realises some of the things that were hidden in 1973 but are perfectly evident and revealed now. Michael Leonhart’s arrangement creates a fascinating way for the horns to support Fagen on the final verse before noodling guitar from Herington works alongside Fagen’s Fender Rhodes to lead us to a nice outro. 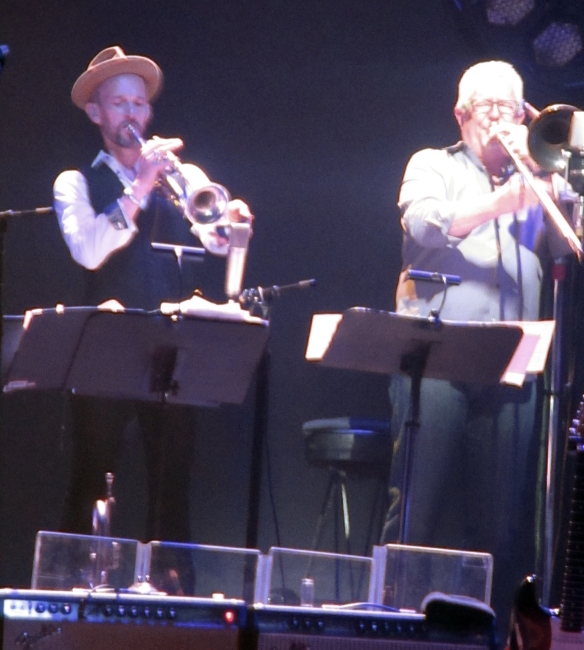 The stewards tonight were being a little heavy handed. Fortunately, a better balance was struck on the later nights of the band’s Beacon stand. A happy medium of “no videoing but regular photography allowed” ruling came down from on high and was largely observed.

Next, the funk-driven new arrangement of Showbiz Kids took centre stage. This arrangement has been developing over the last few years and now is the time to catch it in all its Freddie Washington-driven glory. A well-stocked merchandise stall allowed us to cheer heartily at the reference to OUR Steely Dan tee-shirts.

While there weren’t really any chart hits on “Countdown to Ecstasy”, we are now into the heart of the best-known “on radio” songs of that era as Show Biz Kids is followed by My Old School. It’s interesting that what made perfect sense on the record, somewhat dilutes the energy in the venue when the up-and-dancin’-an’-clapping turns to the more thoughtful last two songs of side two of the record and people are not sure whether to keep standing or sit back down. Wiser heads prevail and it’s back into seats for what follows.

“Pearl of the Quarter” is next up which is the song which probably sounds least like the jazz-funk-rock sound that has become Steely Dan’s territory. Maybe the evening’s canvas and palate are all the richer for the wideness of sounds, but it does still sound a little out of place. The steel sounds are handled well by Herington and this song sounds pretty faithful to the original

One of my favourite songs in the Dan canon is “King of the World” and tonight’s version (another rare outing) is tasty and succulent. The male Leonhart chimes in with a little trumpet while the female (and prettier one) and her cohorts help out on the chorus. This song has a basic structure which was so far ahead of its time it doesn’t really need to be taken anywhere new but an off-the-wall closing moment from Mr Fagen does no harm.

No sooner had Donald said “We’ll be right back”, then his comfort break gave time for the rest of the band to jump into a buoyant saxophone-led rendition of “Hallelujah Time” during which all the parts of the horn section find time to work out their chops. 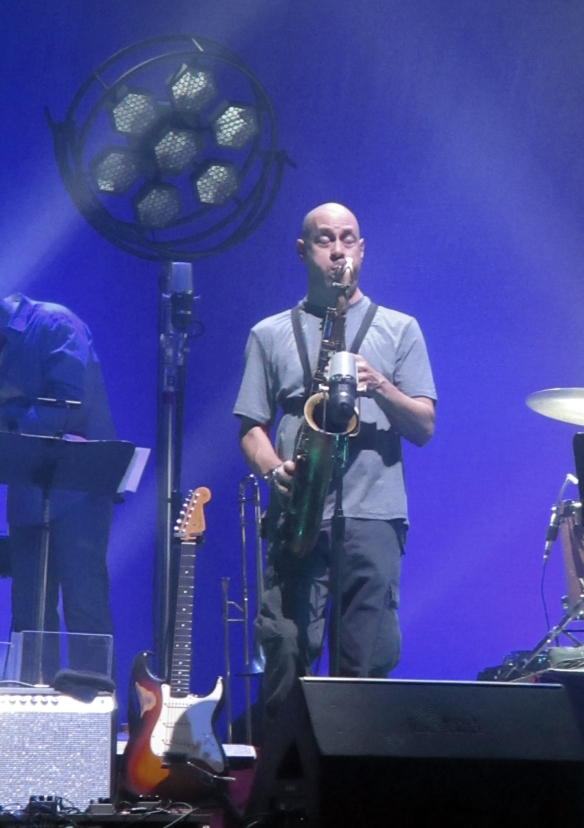 After a brief comment from Fagen about what is happening in New York at the moment, we move into Black Cow from the Aja album which is mixed (the cocktail way) to perfection. Aja was of course the album where Steely Dan realised the vision that they had in mind for the band perhaps from the beginning and certainly to the end and so this format of band is designed for just such a time and number as Black Cow. Faultless.

The rest of the evening slips into sync with songs which were all included in the “By Popular Demand” and the forthcoming “Greatest Hits” evening and inevitably they are exactly what a certain percentage of the more casual visitor to the concert hall wants to hear. They are the equivalent of turkey at Thanksgiving – just what you’d expect but no less satisfying for all that.

We have “Hey Nineteen” (the audience even cheers the exact same ‘Retha Franklin reference that they did last time and will no doubt do every night). Every new lick in Herington’s solo is balanced by Fagen making exactly the same joke about “skating a little lower now”. There is “Aja”, “Peg” and “Josie”, the best-known moments from Steely Dan’s most successful album.

The band introductions take place during “Keep That Same Old Feeling” and the main set closes out to “Kid Charlemagne” and the house-lights go up at exactly the same moment so we can respond “yes, there’s gas in the car”, and, once again, inevitably, we forget to be prepared.

We have a first encore of “Reelin’ in the Years” and the vocalists leave while the band work out to “A Man Ain’t Supposed to Cry” which is a perfect instrumental closer.

So, what did we have tonight? A first half with several seldom performed tracks to keep those looking for “deep-cuts” happy. It’s fair to say that if “Countdown…” was re-recorded today I am one listener who would find it a more satisfying listen (I’m not suggesting it should be, it’s just an observation and a matter of taste).  Then we have a second half that is ideal for those who might only see Steely Dan once or twice. Those performances don’t go through the motions. Those prime cuts are cooked to perfection.

I’m still an advocate for the band recording a complete set of one of their Beacon runs and releasing a deluxe box set with photos and all the trimmings. Maybe one day they will come on board for the idea.

1 thought on “Steely Dan: Kings of the World?”