Where: The Swan Theatre, Stratford-Upon-Avon

All the signs were there and I should have spotted them.

It was the way that when I was sat in my seat before the performance started, I noticed, in the programme, the praise of Rupert Goold’s production of The Merchant of Venice, last year.

It was the way that when I read the cast-list I noticed that the character Hubert was AWOL.

It was the way that the same cast-list said that the part of Philip the Bastard (necessarily, here, just the Bastard) had been cast as a woman. (follow me carefully now – not played by a woman but played as a woman).

And that Cardinal Pandulph was also being played as a woman – consequently, reduced to Pandulph, the Pope’s legate.

I groaned inwardly when Pippa Nixon (The Bastard) entered the stage of the half-empty theatre, with a ukulele and invited us to sing along to “Land of Hope and Glory”. Ever the party-pooper, I declined. 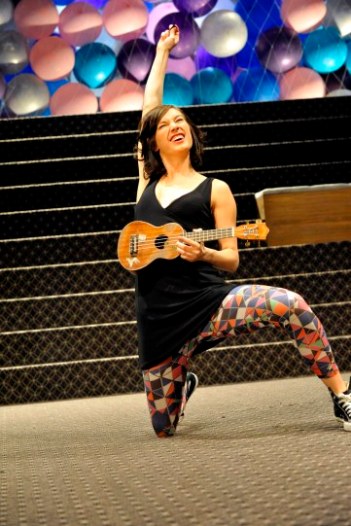 But still I wasn’t expecting what came next. The play chugged along. Pippa Nixon involuntarily spat on everything and everybody and was just generally not very good. Some of the costumes (Lewis the Dauphin’s (Oscar Pearce) blue tanktop being a case in point) made me wince. But on the whole it was okay.

And then all of a sudden we were celebrating Lewis’ marriage to Blanche (Natalie Klamar) and the disco began.

Yes, folks, it’s novelty night at the RSC once more and another director has chosen to bury a play so deep you have difficulty trying to see the quality peeking through.

We came to see Shakespeare and the cast are miming along to Bill Medley and Jennifer Warnes’ “(I had) The Time of My Life”.

The problem with novelty is that  if you apply it to every play in Shakespeare’s folio, it becomes not novel but irritating.

The second half of the play with the aforementioned Bastard giving us a tense and moving version of Wye Oak’s edgy “Civilian”. It was good but I wasn’t sure what it was there for. It concludes with a flash of light and the release of many, many latex balloons which had been attached to the backdrop since the night began. And of course, a bang. Their dramatic release surprised the audience (in a predictable sort of way) but then the actors had to kick their way through them for the rest of the night. There was obviously a metaphor or hidden meaning here and I’m sure it was very clever but I’m not really on message.

After this (balloon kicking aside), the play continued in a decent enough tone with some good work from Alex Waldmann playing John, a ridiculous Yorkshire accent from David Fielder playing Salisbury and more whining and wincing from Pippa Nixon. The child actor playing Arthur was very good whilst the boy playing Prince Henry sounded like he had been given his lines on a piece of paper before entering the wings. But on the whole it was pretty good if lacking a little momentum when the play veered towards been done “straight”.

The strongest performance of the night (by a country mile) had come to its close in the first half with the death of Constance. Susie Trayling played a strong and passionate part and managed to convince that she believed in the play as well as the interpretation. There were few others of the cast that managed to convince me they cared about the text as it was once written down before lines were resorted, reinterpreted, and robbed of passion and anger.

And a weakest performance? Paola Dionsotti as Pandulph managed to sleepwalk through the whole proceedings. She didn’t seem like she was really there most of the time.

But after the disco, the play had settled into a passable rhythm and there were some good performances. And then as King John neared his anguished end, the sound of Frankie Valli and the Four Seasons singing “Beggin’” flooded the stage and Waldmann began to dance to it in a manner that will stay with me for many years – especially in my bad dreams. Now I love Frankie Valli’s music more than the next man and this abuse of Shakespeare and Valli on one night is a little too hard to take. I will be down the front at the Royal Albert Hall when Valli visits the UK next month and when the band strikes up “Beggin’” I will try to forget that dance….. but I don’t know if I can.

It just reminded me so much of Goold dressing Launcelot Gobbo up as Elvis Presley and putting “Are You Lonesome Tonight?” in his mouth…. I just care more about Valli’s back catalogue. Call me quirky. Novelty? I think not.

Maria Aberg, the director, has borrowed one too many of Mr Goold’s not-so-good ideas for that to be an excuse.

I read an interview with company dramaturg, Jeanie O’Hare (soon to be leaving and heading for the States. Did I hear a cheer?) where she said that she thought the future of Shakespearean performance was  going to be gender blind. This all sounds wonderfully modern and meaningful…… but I don’t think I’m going to enjoy it.

So the RSC has once again wonderfully divided opinion. The Independent hated it…. The Guardian loved it. Nobody noticed that if you took away the balloons, the modern songs and the ridiculous dancing, you just had an awfully ordinary performance with a good-to-great play just trying to get out.

3 thoughts on “The Graceless Action of A Heavy Hand”