The Royal Shakespeare Company last performed Henry IV Part II in 2008 as part of their “Histories” cycle. On that occasion it was necessary that they performed both Henry IV plays in tandem as they were performing all of Shakespeare’s history plays. Now in 2014, they have chosen to perform the two together again. I wonder at the wisdom of this decision.

Stage presentation at the RST for Henry IV Part II

This problem is not a new one. It has been long acknowledged:

“In the two parts of Henry IV there are not two princely reformations but two versions of a single reformation. And they are mutually exclusive.”

“Henry IV is both one play and two…the two parts are complementary, they are also independent and even incompatible”

So why has Gregory Doran chosen to present both productions so closely together – to make them go, as it were, hand-in-hand if this is not to the plays’ advantage? Also, why has he chosen to broadcast a performance of both into UK cinemas if the end result of this is to leave the Royal Shakespeare Theatre with many empty seats?

Well, I think the primary reason is to be able to present both plays with this stellar cast. Anthony Sher is as outstanding in Part II as he was in Part I. Alex Hassell delivers another strong outing as Prince Hal. Trevor White’s Hotspur, thankfully, has no part in Part II. Jasper Britton as Henry IV is solid. Paola Dionsotti, as Mistress Quickly, is on firmer ground than she was in Part I, although the age differences between her character, Falstaff and Falstaff’s lover, Doll Tearsheet (Nia Gwynne) are even more noticeable and bizarre because of the addition of the young whore to the Dramatis Personae. 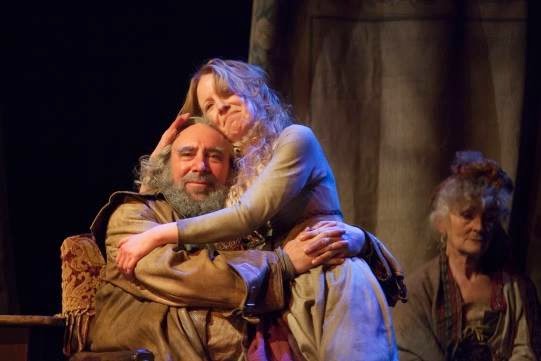 The strong additions are the marvellous pairing of Oliver Ford Davies as Shallow and Jim Hooper as Silence who along with Falstaff and Bardolph (Joshua Richards) make a wonderful comedic troop.

The smart decision that wins the battle for Mr Doran is the placing of the interval. He chooses to open the second half of tonight’s production at Act III Scene II, rather than at any of the more conventional points he might have used (i.e. the beginning of a full Act). This means that the section of the play that most resembles the production of Part One all comes before the interval and the material that the audience is going to find most amusing or compelling comes after the break.

Consequently, Doran has tried to find an extra flavour to spice up the first section of the performance and this comes most noticeably in two of the parts given to Anthony Byrne – Rumour and Pistol. Rumour, who sets the scene for the play, is clothed in contemporary dress (a Rolling Stones t-shirt) and uses a mobile phone to make his entry and connect with the audience. Pistol is a wild and rampant “turn” with gelled hair who reveals his bottom to the audience. Unfortunately, neither character can quite carry the weight that is needed. Rumour and his phone is too similar to the camera that Rupert Goold gave to Sam Troughton in his production of “Romeo and Juliet” a few years ago and Pistol is much too like several comedic roles that Jonathan Slinger has been given by the RSC in recent times.

And so Part I had two good sections. Part II relies a little too much on its second half to carry the day. But somehow carry the day it does. It is another triumph for Anthony Sher’s Falstaff and his cohorts and another great night out at the theatre. But I might wait a month or two after Part One before I book the tickets for Part Two. Sadly there will probably still be seats to be had.