What: The Two Gentlemen of Verona by William Shakespeare

Where: The Royal Shakespeare Theatre, Stratford-Upon-Avon

The programme, which you can purchase for £4 at the theatre door, makes much of the fact that this is one of the very few times that the Royal Shakespeare Company (RSC) has staged “The Two Gentlemen of Verona” in recent years.

In fact, to find a full production in the Royal Shakespeare Theatre you must set your time-travel machine to arrive in 1970 where you would find Helen Mirren, Patrick Stewart, and Ian Richardson undertaking that difficult venture.

The reality, however, is that this is not as difficult a play as the RSC would have you believe and to stage it is not so brave. Indeed, this is shown in their 2014 production which they have been willing to place in the hands of a number of principal actors making their RSC debuts. And what’s more they pull off this not-so-herculean task with great aplomb and skill. In fact, this is successful to such a degree that you would be a fool to miss this brief run of a well-directed and imaginative production. 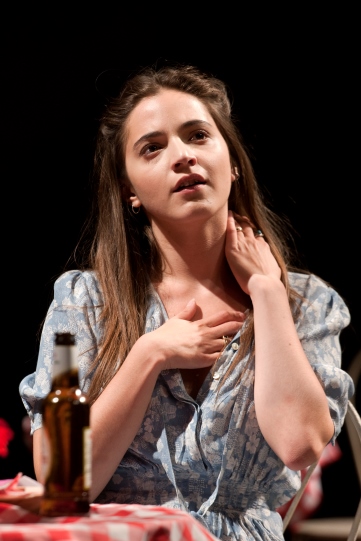 That is not to say that the play itself is not without some problems. Firstly, there are a few too many scenes that allow the director to need only one or two actors to be on the stage but (director) Simon Godwin overcomes this by making the stage busy with other activities when the monologues and dialogues are a little slight and trusting his cast to be able to embrace the verse when our writer has given them stronger material. 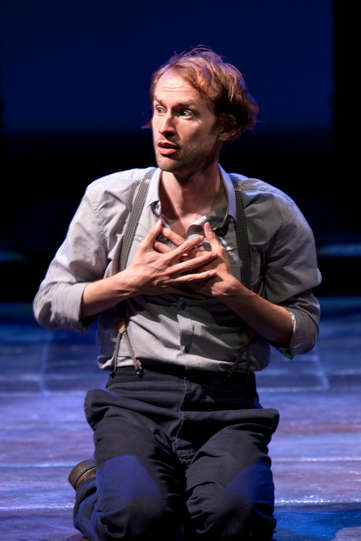 Secondly, the conclusion of the play’s plot resolves itself a little too easily given the emotional devastation and lies that Proteus (Mark Arends) has wrought upon his friends and loved ones. Again, the director uses visual hesitancy and other signs to show the damage that the text alone does not. This is particular noticeable in the memorable conclusion when Proteus and Julia (Pearl Chanda) come together in a manner which belies the exuberance of Valentine’s (Michael Marcus) closing line:

“That done, our day of marriage shall be yours ,

One feast, one house, one mutual happiness”

A woman bearing the character that Julia has shown throughout would probably rather kick Proteus somewhere delicate rather than hold his hand and go off mildly to marry him. 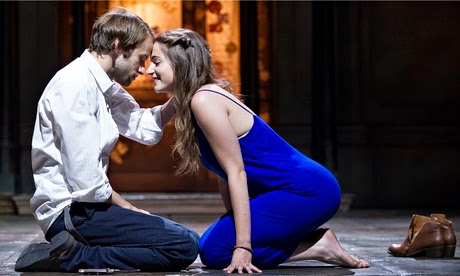 Leaving aside the occasional slightness in Shakespeare’s plot, this then does bring us to the subject of our group of actors who make this play come alive. The principle three actors – Ms Chanda, Mr Marcus and Mr Arends – are each in their debut season for the RSC and each only appearing in this play during this season. 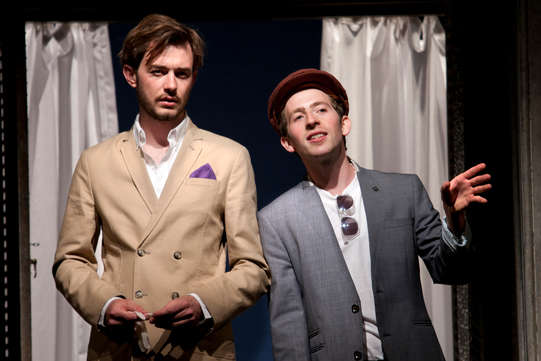 They carry off their roles with great energy, humour where appropriate and extreme dexterity. Mark Arends does seem a little nervous in places but whether this is because of the early point in the run that I saw the play and consciousness of the weight on his shoulders or whether this is because he wants to communicate to the audience something of the character’s fear that his duplicity might be discovered, is not something that I could easily decide. Either way, he gets away with it.

Amongst the more experienced hands who are on-board is Roger Morlidge, who plays the fool Launce who is accompanied by his dog, Crab, played by Mossup, who comes to the RSC direct from a stint in an Aldi TV commercial. Most of the play is light-hearted but these two make for a great comedy team and the dangers of having a dog on stage are never realised. And they say working with children and animals is meant to be difficult. 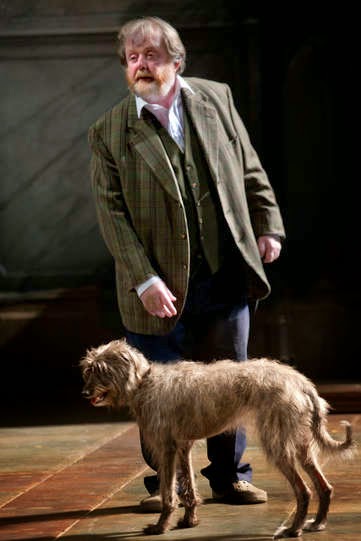 Also exceptional is Martin Bassindale who plays Speed who also appears in the two parts of Henry IV which are currently running at the RST. He clearly has a big future ahead of him.

An actor who has more RSC credits himself than the rest of the cast put together is Keith Osborn who plays Antonio. He delivers the kind of solid workman-like performance that allows the principals to shine. This could also be said for a number of the other cast members.

The only role that doesn’t seem to be filled adequately is that of Sir Turio which is undertaken by Nicholas Gerard-Martin. For most of the play, he seems quite wooden and then when his chance to really shine comes with his song to Silvia (Sarah Macrae) his voice is not strong enough and all his on-stage antics cannot really redeem a scene wasted. 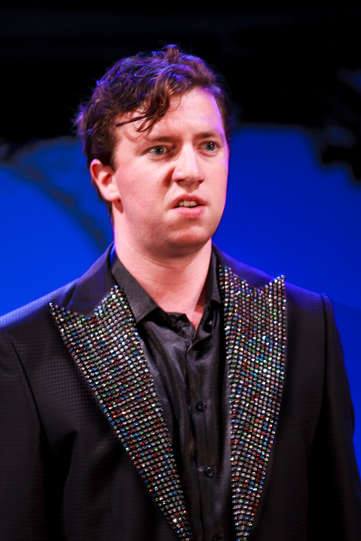 So another success for the Royal Shakespeare company and it seems quite a long time since they have delivered anything else but great productions. If this continues the days of their novelty productions of Troilus and Cressida, King John and Merchant of Venice, of just a few years ago, will soon be forgotten. 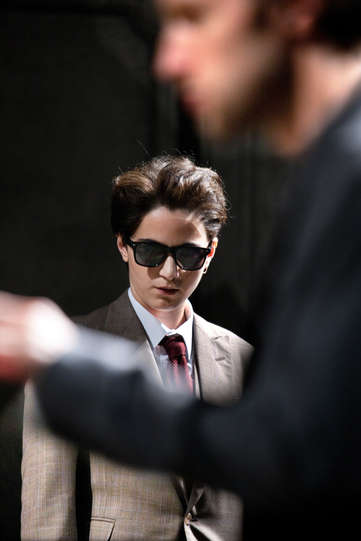 Julia pretends to be Sebastian