The Yankees’ pitching is still threadbare. However, surprisingly, bringing in a few starters who were struggling elsewhere and coupling them with a bullpen that has been performing consistently seems to be working. Let’s see who was doing well in July:

Signing Brandon McCarthy, who was 3-10 with Arizona and was carrying an ERA of just over 5, didn’t seem like something that a team who was planning to be heading for the playoffs ought to be doing. However, whether through luck or judgement, it seems to have paid off. McCarthy is 3-0 (4 starts) and 2.55 since joining the Yankees. At times he has let too many people get on base (a 1.30 WHIP) but he has been great at getting out of jams. Whether he can maintain this remains to be seen but he is proving a useful bridge to get to the point where the Yankees might see some of their injured arms becoming available again.

One of those who McCarthy is filling in for is Masahiro Tanaka who was pretty awful in the last games he played before going on the disabled list and achieved an ERA of 5.93.

Also solid in his Yankees debut was Chris Capuano. Capuano had been released by Boston on the first day of July and then joined Colorado but was only used in the minors. He must have been very relieved to get a chance with the Bronx Bombers! 6 innings, 2 runs in a no-decision against Toronto must have given him much encouragement after that spell at Triple-A.

In July, David Phelps was the most consistent of the starters who had also been in the rotation in June. He averaged just a little over 6 innings a start and brought in an ERA of just under 3.

Shane Greene and Hiroki Kuroda did respectably in July without really setting the world a light. Surprisingly, the much less experienced Greene was marginally the better of the two.

With the arrival of McCarthy and Capuano, Chase Whitley and Vidal Nuno were to prove the losers in a crowded pitching situation. Whitley found himself operating out of the bullpen whilst Nova left New York altogether, heading to Arizona. Nova has seen an improvement in his ERA in his new surroundings but is yet to bring home his first win for his new club.

Coming out of the bullpen, Dellin Betances and David Robertson have continued to dominate. Betances is the one of only two pitchers on the team with a WHIP of under 1 and struck out 19 in 15.2 innings. Robertson added another 9 saves to his haul and managed 20 strkeouts in his 13 innings.

Most improved reliever was Shawn Kelley who allowed less walk and hits per innings pitched than Betances. He gave up only 5 hits in 11 innings.

David Huff has quickly become the principal left-handed reliever, displacing Matt Thornton. Huff walked too many but came away with a very healthy month despite this. 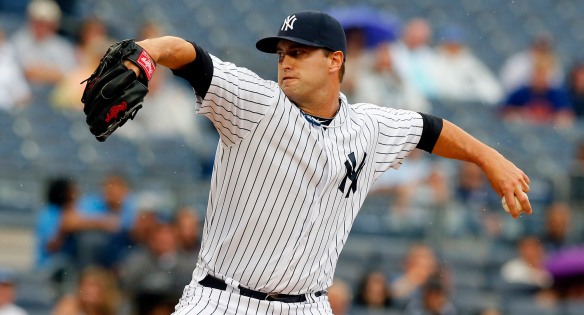 Thornton still had a respectable month with an ERA of 3.00 but he seems to do much better when he doesn’t inherit runners – which is a problem for a spot specialist like him.

Adam Warren had struggled in June after a strong April and May and things got worse in July. He gave up 6 runs in just over 9 innings and is clearly not at his best.

The merry-go-round of bullpen pitchers seems now to be down to the last slot but attempts at filling this with Jim Miller or Jeff Francis were equally unspectacular and unsuccessful (actually that’s not fair, Miller was much worse) and their time in pinstripes was short-lived.

It’s a big surprise that the Yankees didn’t bring in a big name starter before the end of the month so this seems to be largely what they are going to have to manage with. Whether it is enough is debatable at best and a little unlikely.