What: Much Ado About Nothing (promoted as “Love’s Labour’s Won”) by William Shakespeare

So I was back in Stratford-Upon-Avon for the second half of this strange coupling that Gregory Doran is determined to promote as “Love’s Labour’s Lost” and “Love’s Labour’s Won”. In reality, as I suggested in my earlier review these two plays share no common ground other than their humorous tone and those imposed by the director’s decision-making. 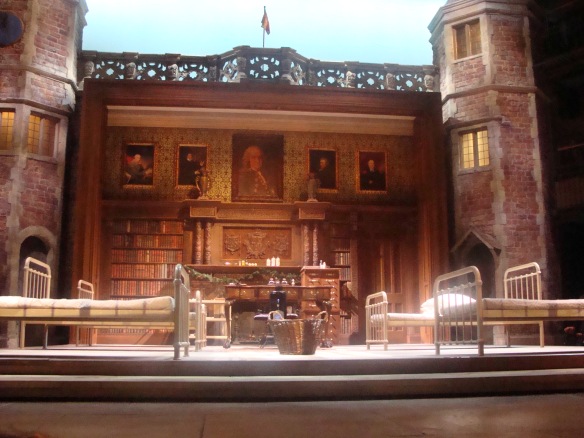 And so to this production. I think the principal problem with producing “Much Ado About Nothing” is that it has a weak storyline. Man and woman are attracted to each other but pretend not to be. Their friends contrive to help them overcome their reluctance. Meanwhile, the villain of the piece, Don John, manipulates everybody to turn friends into enemies. The heroes of the play are the fools who somehow manage to discover the plot and set everything to right. These are not “fools” in the normal Shakespearean sense where they appear foolish but speak wisely (see for example “King Lear”) but “fools” who have no wisdom to offer and work their way through their lives with spoonerisms and slapstick but come out alright in the end.

It is reasonable to say that “Much Ado About Nothing” is not a deep play.

Its strength is found in its beautiful language. The two principal characters, Beatrice (here played by Michelle Terry) and Benedick (Edward Bennett) are given witty epithets, sharp put-downs and long complex sentences which are filled with flying barbs. 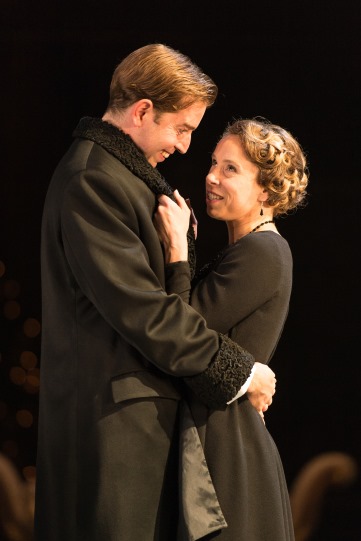 Ms. Terry handles some of this well but in the longer sentences seems to remember them better than she feels them. That is to say, she delivers her lines but the sense of them sometimes does not reach the audience. This, in the earlier stages of the play, also affects Mr Bennett. This is more surprising in his case. He subbed for David Tennant some years ago in the role of Hamlet, which is full of impassioned lengthy, wordy speeches and he delivered them with a straight bat. Here, at least on this night, he recovered well in the second half of the production but there were times when the words, in the first half, were there but the sense was not.

In Michelle Terry’s case this continues throughout the play in the lengthier sentences although most of the short witty barbs are delivered as accurately as the darts they are meant to be. But even there, there are exceptions. Her “What fire is in mine ears?” in Act 3 Scene 1 sounded very much like that flame had been extinguished long ago and she didn’t know what to do with the line. 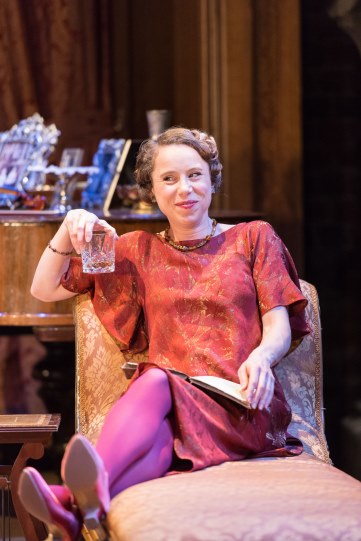 The second couple in the story, that of Claudio (Tunji Kasim) and Hero (Flora Spencer-Longhurst) more than make up for any shortcomings. Ms. Spencer-Longhurst particularly is delightful. Her delivery, her mannerisms and her body language are exceptional. 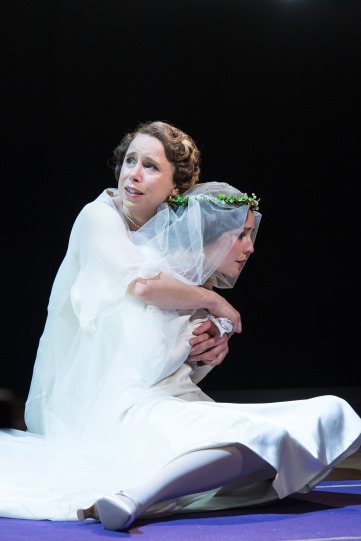 Along with Mr Kasim, she makes a great partnership. The height of their presence is felt in the church scene, where it is thought by all they are to be married. Flora Spencer-Longhurst’s journey from devoted and lovestruck to rejected, tortured and near-dead is something to be beheld and is quite wonderful.

Tunji Kasim delivers a great sense of self-righteousness as he dispassionately destroys the woman he thinks has wronged him.

Also, bringing brightness to this bubbly production are the Watch, led by Nick Haverson’s Dogberry and Roderick Smith’s Verges. Haverson is particularly good. If in “Love’s Labour’s Lost” he reminded us of a Chuckle Brother, in this production he is transformed into a kind of slapstick Will Hay. Quite marvellous and the heart of the foolish humour in the production. 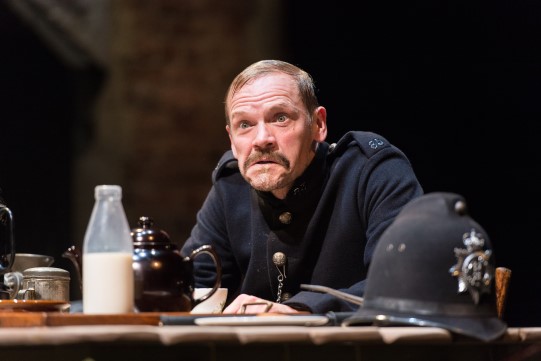 All the other roles in the play are handled well, although particular commendation might be made to David Horovitch’s Leonato and John Hodgkinson’s Don Pedro who deliver a stiff upper-lip and maturity in the midst of all the silliness. Frances McNamee’s Irish Ursula goes over well too with just a touch of Father Ted’s Mrs Doyle in her funnier lines. Friar Francis (Jamie Newall) is the order amongst the chaos of the dramatic wedding scene at which Hero collapses.

A marriage begins to fall apart

The stage design, by Simon Higlett, as in “Love’s Labour’s Lost” is just right, if a little indulgent. The country house and gardens are just great. The billiards table and grave that arise from below the stage for just a few moments are perhaps a little more than was required but a nice luxury if your budget will run to it! The music and songs are well-staged and performed and a little more limited than they were in “Love’s Labour’s Lost” which makes better proportional sense to the play as a whole.

So Artistic Director, Gregory Doran and Production Director, Christopher Luscombe have persuaded me that “Much Ado About Nothing” is a better play and a play with more potential than I thought it was. Their other claims remain unproven. “Much Ado About Nothing” will always have more levity than depth – whatever we call it – but this current production does very nicely for a fun night out at the theatre. Go before Christmas and the Christmas Tree and the performance of an abbreviated “In the Bleak Midwinter” will not seem so out-of-place. 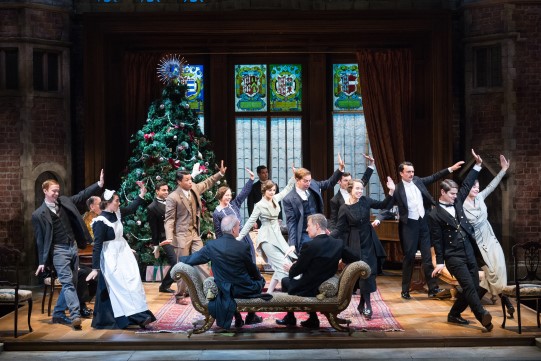 Enough song-and-dance… but not too much