Sometimes an article changes direction just as you’re writing it and this is one because the Yankees’ progress over the last month has had more twists than the average tornado.

First there was their majorly disappointing decision not to make an offer to David Robertson. If you’d asked me in September who was the most important player that the Yankees must re-capture in 2015 then there would be no doubt in my mind that it would have been Robertson.

David Robertson – He was the closer, now he’s gone

He had slotted into the role left vacant by the retiring Mariano Rivera without missing a beat. Now this would have been an accomplishment in anyone entering their first season as a closer but taking over for Rivera who was the finest closer in the history of baseball and with all the media attention that came with achieving that in New York was way beyond what we might have expected.

So the Yankees needed to pray hard that he would accept their qualifying offer and when he didn’t they needed to get out their billfolds and offer him whatever he wanted. There was talk that he was looking for “Papelbon money”. I would have offered him half of that again to keep him in New York.

So when the story came out and it was revealed that the Yankees hadn’t made him an offer at all then this was a disappointing story indeed for your average Yankees fan. The Yankees it seems were content with the addition of left-hander Andrew Miller on a 4-year, $36m contract. They seem to think they no longer needed Robertson and he headed off to the White Sox. Only time will tell if they have made a huge mistake.

However, things began to look a little more cheerful when they made some signings to re-stock the infield and it is to that we will turn next.

On the same day that they signed Miller, they also brought the guy they see following Derek Jeter into the shortstop’s role. Now there was no sense in trying to find a new Jeter, there are none, so to capture a young shortstop with potential to develop and who was major league ready on a comparatively low cost contract seems to be a good move. This involved a three way trade between the Yankees, Tigers and Diamondbacks who have been frequent trading partners. The Yankees gain Didi Gregorious from the Diamondbacks and lose Shane Greene to the Tigers. Greene is a sizable loss but is perhaps out-weighed by Gregorious who fills that notable gap left by Jeter. He is good in the field and has potential with the bat. I count this as a good move. 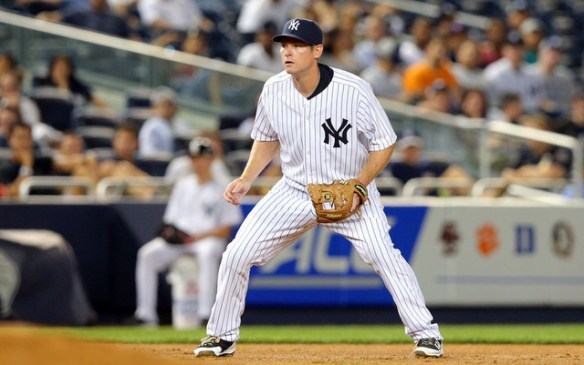 The Yankees then completed the infield picture by re-signing Chase Headley to a four-year contract which will cost them $52m. Forget the money, it seemed to set the Yankees’ fielding line-up:

And then something very strange happened that turned it all around and changed the direction of this article just as I was writing it.

The Yankees traded away Martin Prado and RHP David Phelps for a group of players from the Marlins who on the face of it look far less significant to the team.

Martin Prado – Why, oh why?

The infielder in the package (I’ll come to the rest in a moment) is 33 year old first-baseman, Garrett Jones who played 129 games for the Marlins at that position in 2014 and not a single innings at second base. This leaves the conclusion that the Yankees see him as the back-up for Mark Teixeira but it leaves a gaping hole at second base.

Yankees’ fans have reacted with outrage on the internet and it has to be said that it is hard to see any logic in this one. Prado was the sole highlight of the offensive players that came in during the second half of the season and letting him go is strange to say the least.

Jones’ contract for 2015 is $5m, Prado’s would have been $11m so it might save the Steinbrenner brothers some cash but the fans are very conscious that this was not how it was under their Dad and that The Boss for all his faults put winning first. This deal might be a public relations disaster unless this a preliminary to a big signing which is not yet revealed.

In a footnote, the Yankees signed 2B Cole Figueroa and C Juan Graterol to minor league contracts.

As well as not re-signing Robertson, the Yankees let Brendan McCarthy, who was a revelation in the second half of 2014, pass and instead chose to bring back Chris Capuano who had a losing record with the club in 2014. This curious decision tags Capuano as the no. 4 starter and with McCarthy now having signed for the Los Angeles Dodgers, David Phelps looked like one of the most likely candidates for the 5th spot until last night’s surprise trade package took him to Miami alongside Prado.

Capuano – He’s back for better or for worse.

The starter going in the other direction is Nathan Eovaldi who was 6-14 for the Marlins last season and has never had a winning season at the major league level. Last season, he was paid a fraction over $0.5m and so again,it is a cost-cutter compared to Phelps who earned ever-so-slightly more last year but on paper the Yankees lose out on this part of the deal as well as the Prado move.

Starters 1, 2 and 3 are set to be Masahiro Tanaka, Michael Pineda and C.C. Sabathia but all three are coming off injury hit seasons.

So I take the picture of pitchers to be Tanaka-Pineda-Sabathia-Capuano-Eovaldi which is pretty good if everyone stays fit but not as good as it could have been if they had shown a little more vigour in pursuing McCarthy.

I’ll come to this more fully in our next update but I wanted to update on the players who have been added and subtracted to the picture in this column.

David Huff performed well for the Yankees in the latter part of 2013 but they let him go. They brought him back in the later months of 2014 but they’ve now let him go again. He is currently a free agent.

Esmil Rogers was offered a new contract and signed a 1-year deal for $1.48m and adds himself to the mix of long relievers.

The Yankees signed 25-year old reliever Gonzalez Germen (pronounce that ‘G’ as an ‘H’) in exchange for our old friend, cash considerations. That cash goes to the New York Mets.

Preston Claiborne, who has had a very up-and-down few years for the Yankees, finds himself designated for assignment to make room for the new influx.

As mentioned in previous columns, Andrew Miller and Justin Wilson are the two major incoming players who will find a spot in the bullpen. Miller will probably battle it out in Spring Training with Dellin Betances for the closer’s spot.

In another footnote, the Prado-Phelps-Jones-Eovaldi trade also brought the Yankees a minor league prospect in RHP Domingo German.