What: Cymbeline by William Shakespeare

Mmm… first of all you’re asked to delay your night at a Shakespeare play then your hotel manager tells you that the play has had somewhat “mixed reviews”. Then you hear the story of how the first night’s audience were given a refund because the play was running well behind in its mad dash to be ready for press night. As you take your seat in the theatre perhaps you’re right in not having too high an expectation of the night’s proceedings.

At least you know what’s coming. The married couple next to us who didn’t buy a programme (having paid £110 for a pair of tickets) left at the interval mumbling that “it wasn’t worth watching”.

Outside in the gift shop, the RSC are selling a new line of merchandise which emphasises that hoary old quote from Ben Jonson where he said that William Shakespeare “was not of an age, but for all time”. The RSC may sell this idea but they don’t seem always to believe it. Again, in this production, they do not trust their audience to see its relevance to contemporary issues but rather they bury the play in pasting on their overtones and just in case you still can’t see it, they fill the programme with those notions.

Two of the big issues of our day are gender politics and European union. Therefore, Cymbeline (which we are told is a play whose day has come in 2016) must be made to be about these two issues. There is, however, a problem in this. The play is to run until October. The European vote will take place in June. Won’t this make some of the issues in the programme rather dead whilst the play is still running? The gender issues are only achieved by changing around the sexes of many of the principal characters in the play. It seems that whatever the RSC wants us to believe this play is about, fails rather to grasp the big picture of what Shakespeare had in mind. I forsee some difficult in filling the house as the run continues – empty seats are ahead.

Let’s survey some of the issues that have been stapled heavily on the script in a way that makes the recent production of Danish Hamlet which was set in Africa seemed light-handed.

First those EU issues. Britain is being asked to retain its role in the Roman Empire but if they don’t they will be attacked. If they do, they will have to pay in a kind of involuntary slavery. The director wants us to see parallels in this with the current situation. She and her creative staff are in favour of staying in the EU. It would seem that the way that the play is staged has more echoes of the arguments of those who want out. Next, Shakespeare wrote his play in English. In order, to represent the European-ness of the play, various sections of the play are translated into French, Italian and even Latin. Shakespeare’s script appears on the walls at the back of the stage whilst this is going on. This is done page-by-page in a way that I found difficult to keep up with. Now most of the people I seek to inform about Shakespeare say that they find the language and the imagery archaic. I disagree with them – but by presenting the play in a way that is unnecessarily hard to follow, the RSC are not drawing anyone towards Shakespeare.

Then those gender issues. Cymbeline becomes a woman. Her new partner in marriage therefore (I suppose) has to become a man. Her heir (and offspring from her first marriage) becomes a female. Apparently this has something to do with patriarchy and the stereotyping of wicked stepmothers. It is far removed from Shakespeare’s world and simply doesn’t work.

So i guess we are left with nothing more than the acting itself to redeem this production and most of the cast seem to flounder in their strange surroundings. Posthumous Leonatus (played by Hiran Abeysekera) seems all at sea in the “dream” sequence which is staged evocatively but is unlikely to add anything to the audience’s understanding of what is actually happening. During the battle scenes, he runs around like some kind of ballet ninja dressed in a lacy tutu whilst he tries to suffocate his chief enemy, Iachimo (Oliver Johnstone) with a heavy-duty polythene bag.

Mr Johnstone’s Iachimo is at heart a lustful and sexual character but here he is made just too vulgar with mannerisms which once more go too far in not trusting the audience with the lines that are being spoken. Gillian Bevan’s Cymbeline looks like Boudicca whilst James Clyde’s The Duke looks like my High School Physics teacher. An odd pair, indeed. 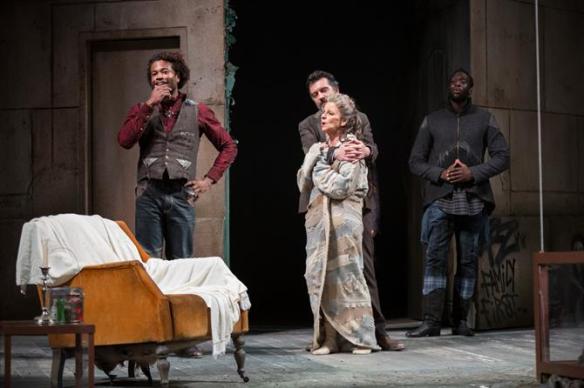 Imogen (styled Innogen here) played by Bethan Cullinane comes into her own in the second half of the play in the scenes that are set in the forest at Milford Haven where Belarius (Graham Turner), Guideria / Polydore (Natalie Simpson) and Arviragus / Cadwal (James Cooney) are by far the best thing about this production. They are believable where so much else isn’t. 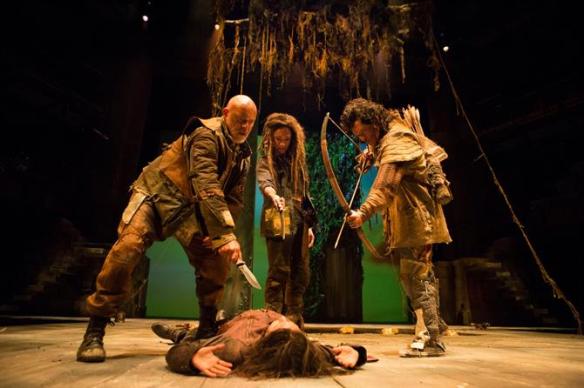 Designer, Anna Fleischle has some good thoughts about the appearance of the stage in the interview in that self-same programme but the actual set creaks and at one point thuds into its right position only when the weight of several actors are upon it. All-in-all, this is a little like the production itself, it cannot carry the weight of the external ideas that have been dragged in from outside and imposed on it. Movement director, Emily Mytton says (in interview) that she did not know the play when she came onboard. Perhaps this was the same for some of the other “creatives”. Certainly, the audience are unlikely to go away knowing the play, Cymbeline, that was written by William Shakespeare by a night watching this production. The issues that are laid open for debate here (gender and European union) are very important ones but they are not well served in the way they are presented.

In one of the best scenes in this production, Guideria (Natalie Simpson) brings in the head of Cloten (Marcus Griffiths) who she has decapitated. The head is obviously not Mr Griffiths but it is well-figured and easily recognisable. It might well-serve as a metaphor for this production. The head could represent the scenes set in Wales at the beginning of the second half which are sensitively done, well-acted and by turn thoughtful, full-of-action and comedic and feel as though they were written by Mr Shakespeare. The body (3/4 of the whole) that has been left behind is unduly heavy, of no further use and (when re-introduced a scene or two later) unrecognisable.

If I was planning to see an RSC production (amongst those written by W.Shakespeare esq) this summer, this would be very much at the bottom of my list. Don’t say you weren’t warned.