Whenever you hear mention of Bob James one of the above will inevitably be mentioned. But when you come to see a Bob James show like this series of dates at Ronnie Scott’s, there is little in sight or sound that would fit that description. Sure, Mr James is keen to come up with carefully arranged material but that was never a crime and the solos and improvisation are as adventurous if not as radical as much you will hear in modern jazz. So why does Mr James have such a rough ride from some reviewers who have filed him under “bland” forty years ago and left him there?

I think to a certain degree he committed the crime in the late Seventies that Dave Brubeck’s Quartet committed a decade and a half before. He made the charts and sold records. That gave those reviewers their own personal permission to imagine that the rest of his recording career would be the same as his first four solo albums and ignore him. In reality, his recorded output has varied greatly and it is very difficult now (if it ever was possible) to pigeonhole him. He has recorded one album of solo piano, several different styles of album with different kinds of duet, four albums as part of a trio (two in the sixties and two in recent years), a recent live album with a quartet not dissimilar to this outfit and a range of other albums that run the gamut from funk to fusion to typical jazz to the esoteric to unusual spins on the classical.

Even when he does come closest to smooth jazz – with his other quartet “Fourplay” – you will find that their studio dates (smoother) contrast with their live dates (not so smooth) so in all kinds of ways, there is plenty on offer.

At Ronnie Scott’s, the first two nights’ concerts were opened by memorable versions of “Blues Down Under” which was opened by Detroit native Perry Hughes on electric guitar, before the number fleshed out to allow the band leader his first piano solo. This was a fairly standard jazz blues with double bassist Yuri Golubev and drummer Billy Kilson holding down a solid rhythm before a brief solo from Golubev led into some more imaginative wotk from Hughes. Remarkably, Golubev had only met James the day before the show and was a late addition to this quartet. He grew in confidence as the various performances moved along but right from day one, he proved a capable adjunct to Kilson and a wonderfully adept soloist. The solo with which he closed the “Blues Down Under” was a truly memorable one as he stretched his hands around his instrument.

The band then moved into another cover with a rendition of Horace Silver’s “The Jody Grind” which Mr James’ trio had recorded on their 1996 album “Straight Up”. Grinning like the archetypal Cheshire Cat, Billy Kilson drove this whole piece with the complex drum rhythm he delivered, first through Bob’s piano solo and then through another bluesy solo from Perry Hughes on the electric guitar. There was another great solo from the double bass whilst Kilson changed to an even faster beat which then led in turn to brief improvisations from each member of the band whilst Billy (an instant crowd favourite) powered through it all. 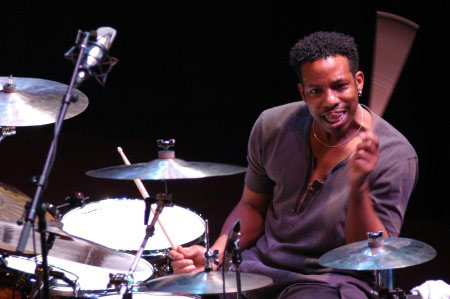 All through this series of dates, the band fed off the energy that Kilson brought to the band and his affinity with the audience but there was also a buzz about the place because of the presence at the front of the stage of an old dilapidated Fender Rhodes electric piano, the very instrument that James was best known for playing on that series of early solo albums which brought him to public attention – the very ones that the jazz snobs tend to get uptight about and hip-hop samplers seem to make so much use of. It was to this instrument he turned next for his version of “Feel Like Making Love” which he recorded in 1974 on his “One” album , which (a Eugene McDaniels’ composition) had previously been a huge vocal hit for Roberta Flack. This, which could have seemed an old chestnut pandering to the audience, was instead stretched out to include great solos from Hughes and James and which a crescendo of cymbals work from Kilson allowed to segue into “Nightcrawler” which originally featured on both James’ “Heads” album and his trio record, the aforementioned “Straight Up”. The remarkable part of the performance of “Night Crawler” saw Mr James first soloing on the Fender Rhodes, then with one hand on the electric and the other on the Yamaha acoustic piano before leading into a fully-fledged solo on the grand. Not bad for a man who won’t see 75 again.

James’ most recent trio album is “Take it From the Top” which featured Kilson on the drums and included a version of “Down Town”, the Tony Hatch composition which became a monster hit in the mid-sixties for Petula Clark. James’ version revolutionised the entire song whilst retaining the chorus motif to make it memorable. He played this in some of the shows this week and stuck very closely to the arrangement he had developed for the album which in places has almost a classical feel to it.

There isn’t much from the Fourplay back catalogue which would have fitted in these shows but Mr James found one which did perfectly. “Avalabop” was named for James’ granddaughter Ava (daughter of Hilary who he has frequently recorded with) and lends itself very well to this more acoustic setting. With Hughes back on stage (he had gone back stage during the trio rendition of “Downtown”), there was some very capable guitar work to lead into Bob’s solo which was the centre piece here, driven by some walking bass by Yuri. This number featured on the first night and the early set of the second night but was left out on other performances.

“Urban Flamingo” is one of the more broad ranging albums that James has recorded in recent years and more likely to appeal to those who like his early albums and the Fourplay material but find themselves a little lost in albums like “Dancing on the Water”, “Angels of Shanghai” and so forth. One of the tracks on that set is “Skidaway” which here managed to sound much more like Fourplay than the track that preceded it. Again, James nailed a great piano solo whilst Kilson and Golubev maintained a solid rhythm around him. This was the one moment in the evening when the two quartets that Bob James leads seemed to be in parallel territory and Perry Hughes showed that he could match the Fourplay alumni of Lee Ritenour, Larry Carlton and Chuck Loeb lick for lick. It should be noted, however, that a great solo from Golubev took this into territory where Fourplay wouldn’t go so its inclusion made more than sense.

There are a number of versions of “Nardis” that Bob James has recorded during his career – on “Bold Conceptions”, his debut and first trio album, on “Take it From the Top” with Billy Kilson” and on “Portrait of Bill Evans” (there may be others) – but this didn’t in any way lessen it being an essential part of this set. Indeed, James and Kilson drove it – with great solos from both. Again, this was performed as a trio with Hughes leaving the stage and this is obviously Bob’s preferred mode for this one.

On a few gigs in the residency, the setlist was changed up to include “The Night Has a Thousand Eyes” and / or “Mister Magic”. “The Night Has a Thousand Eyes” (composed by Benjamin Weisman with Dorothy Wayne and Marilyn Garrett) was a hit in ’62 for Bobby Vee and a bonus track on the Japanese version of “Quartette Humaine” the album which James recorded with David Sanborn recently. “Mister Magic” is a Ralph Macdonald composition made famous by Grover Washington Jr. The slight flaw here was that Mr James’ arrangements of these numbers had both depended on the saxophone work of his bandmates. Here, saxophone-less, they became a little bit more routine, a little more just a chance for the pianist to flex his muscles and there was less going on than in most other moments of the night – less magic you might say. The other highlight of this reworked Mister Magic was some extraordinary drum work from Mr Kilson.

One other piece that was featured on the last night was a duo piece for Messrs James and Golubev entitled, Il Boccalone, which was a gentle thoughtful composition. I don’t know the origin of the piece but it would be good to hear it on a studio recording. The only other reference to the title I could find was a restaurant in Japan by the same name. Now there is a precedent of Bob James coming up with compositions based on food he has eaten in restaurants in Japan  – check out Seryna which he wrote in the late 80s which appeared on a Kirk Whalum album – but this might be a huge coincidence!!

Westchester Lady was a composition that Bob first wrote and recorded for his album “Three” and then was memorably expanded on the double live set “All Around the Town”. During these shows, it led to some more good humoured interaction and magic between Bob James and Billy Kilson. In the first show, it was the closer. In the others it fell just before “Angela” in the running order. James and Kilson challenged each other to higher and higher feats and matched each other blow for blow before returning to the central melody.

Of all Bob James’ back catalogue, “Angela” is the best known, mostly because it became the theme to television’s sit-com “Taxi”. It is also one of the most balladic of all his compositions. It was not played on the first show because of a miscalculation  on the time front but in the remaining shows, it was included. The danger was that because of its gentle nature, it would seem a fondly remembered number but a little of a anti-climax after “Westchester Lady”. However, this version was much closer to the one on “All Around the Town” than on “Touchdown” with great guitar work from Hughes taking it to the next level. 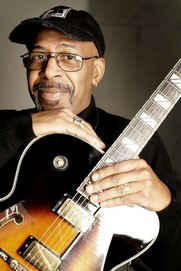 Ultimately, this was a triumphant return to London town for Bob James and his cohorts – a series of concerts full of imagination, bonhomie, wit and four musicians challenging each other to take it to the next level. They took it from the top and to the top and the energy of the audience kept them there. As the series of shows moved on and Yuri Golubev got more and more accustomed to his new bandmates, there was just more and more goodies and treats on offer. Super nights. Nights for superlatives.