What: Three Cheers for Christmas

Who: The Riding Lights Theatre Company

Anyone for two-handed pantomime?

Well… not really a pantomime. A little bit pantomime, a little bit nativity. Mostly a feel good half day out from school for kids who were able to get seats for this free presentation.

It’s the third year that Ravenscourt Arts have hosted the Riding Lights on their London stopover and with Darren Hirst as Master of Ceremonies and Chris Jarvis as the man behind the lights and sound, the theatre allowed the actors to relax and enjoy themselves and play to the audience which they did with great vigour on this mid-December afternoon. 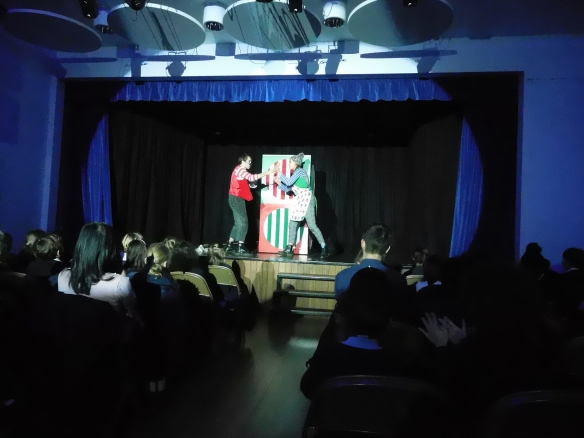 If the play has one shortcoming it may be that the writers involved in the project outnumber the actors. The play is written by Paul Birch, Nigel Forde and Rebecca Thomson and feels suspiciously like each writer wrote one of the scenes at an earlier date and they were then subsumed into the current narrative in order to re-use them.

That current narrative involves a storyteller played by Emily Feltham and her assistant played by Jake Drake who present three scenes from the Christmas story for the delectation of the audience.

First we have an unusual spin on the traditional tale of the Shepherds, then an equally quirky take on the visit of the Magi and finally an angel intervening to save the Christ-child from death at the hands of the soldiers sent by Herod. This latter has a little of a feel of “It’s a Wonderful Life” about it as the angel also helps the soldier to find a whole new meaning in life from within the wintery scene.

Ms Feltham delivers her role with great momentum and energy and Mr Drake is no slouch either. The play loses a little pace in the middle section as could be seen by the little ones starting to get restless and asking their adults if they could visit the facilities,but the pantomime elements soon kicked in and everyone was back on board for the big finish.

That big finish sees the assistant storyteller promoted to full storyteller status as he delivers his version of the Christmas tale with aplomb.

So could it have been better? Perhaps. More character actors? Yes. Less of a feel of this having been stitched together? Probably (note the publicity photos which featured a different set of actors). But I’m not going to be a grouch or Scrooge: the kids loved it and at the end of Christmas that is what will matter most