Holy Gonzalo (Act V Scene 1), Batman! The RSC may have a hit on their hands.

What: The Tempest by William Shakespeare

Where: The Royal Shakespeare Theatre, Stratford-Upon-Avon

Who: The Royal Shakespeare Company

The technology (two years in the works) is both the production’s best friend and its worst enemy. At times it leaves the audience amazed at what it is seeing. At others it swallows the dialogue of the actors and makes the play difficult to understand.

An illustration of this can be taken from the first scene of the play. We found ourselves witnessing a large ship heading for wreck. Now this is normally near impossible to stage convincingly. Here the production design led by Stephen Brimson Lewis enables us to visualise this excellently. The walls of the stage are transformed into the ribs of the ship; the stage is racked by loud rolls of thunder and the sound of torrential rain. This is convincing. But… And here is the problem, the visual effects and the noise drowns out the very words of the play that Mr Shakespeare has written to set the stage for what it is to come.

The RSC has created its own conundrum.

It has created a family attraction of a Shakespeare play which will enthrall teenagers who have been raised on Harry Potter (parents with younger children should approach with caution – there are some frightening images here) but they will be introducing their children to dramatic theatre which is Shakespeare-lite. No harm in that, but it is good to know what you’re getting.

Ultimately though the production is a triumph as its strengths are just greater than its weaknesses. As a first stab into a “Brave New World”, Gregory Doran has given us something that is a very worthwhile experiment.

But it is a stew of this and that – the tasty and the not so appetising. The play is truncated which will further disappoint the Shakespeare purists but there are things here attempted which solve some of the difficulties of a play which is always going to be difficult to stage as the company tries to present an otherworldly magical “isle of noises”. 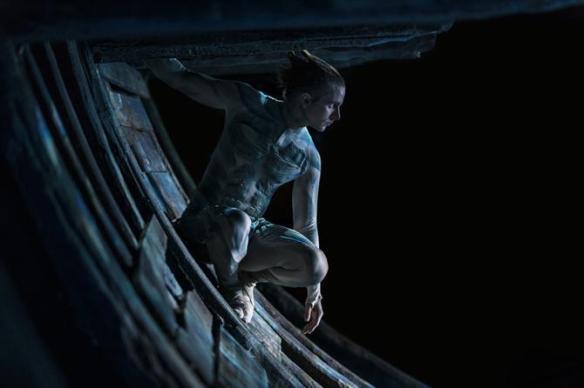 A further illustration can be found in Ariel (played here by Mark Quartley). How do you present a spirit who moves though the air? Well the answer was, in the past, that you just didn’t. You left all that to the audience’s imagination. But by the sensors translating Ariel into a computer-generated avatar, his movement is transferred to a whole other level. And an agile and nimble actor like Quartley is just the one to deliver this for us. However, once more, with every up there is a down. By transferring the presentation of Ariel heavily onto choreography sometimes his words are lost or his voice sounds unnatural and amplified compared to the other actors on the stage. Mr Quartley looks the part, moves the part but he is sometimes hindered by the very technology that is necessary to achieve this. And sometimes even that technology has it limitations. Sometimes, the video imagery of the avatar looks blurry and out-of-focus. 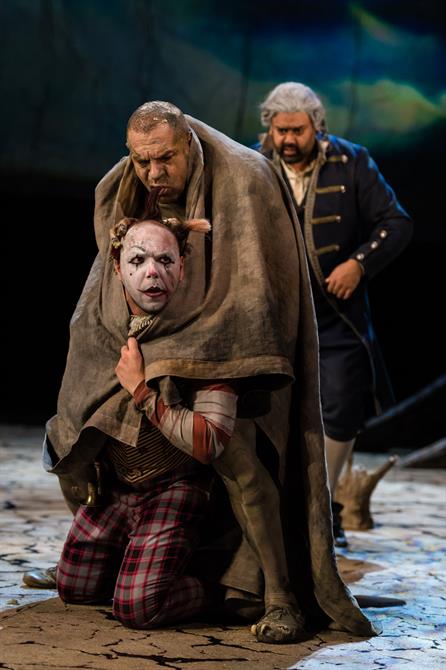 Joe Dixon as Caliban looks more monstrous than some attempts to capture that character that I have seen. However, the monster looks a little too like 1974 Doctor Who or David Bowie’s Elephant Man on Broadway to be too easy standing alongside the high-tech Ariel. However, this aside Mr Dixon joins effectively with Simon Trinder as Trinculo and Stephano played by Tony Jaywardena for some great comedy and slapstick scenes. There is a little part of me wants to say that Mr Trinder has borrowed a little too much from Keith Flint of the Prodigy (visually) and Matt Lucas of Little Britain (vocally) for his own good but he gets away with it.

The rest of the costume of the Spirits are never less than interesting and again the choreography is well thought out. The masks and body-stockings do have echoes of that keyboardist from the band, Lordi, who won the Eurovision Song Contest a few years ago but there really is nothing entirely new under the Sun.

In the middle of all this “magic” are the all too human characters caught up in the madness of the isle and on the whole the actors involved in these roles are not intimidated by all that is going on around them. Joseph Mydell as Gonzalo is particularly impressive and captures the stoic and benevolent nature of that role well. Oscar Pearce delivers a solid Antonio. Less convincing is Tom Turner as Sebastian, the King’s brother, who seems to be unclear as to whether he is meant to be stupid or just perplexed by all that is happening to him. 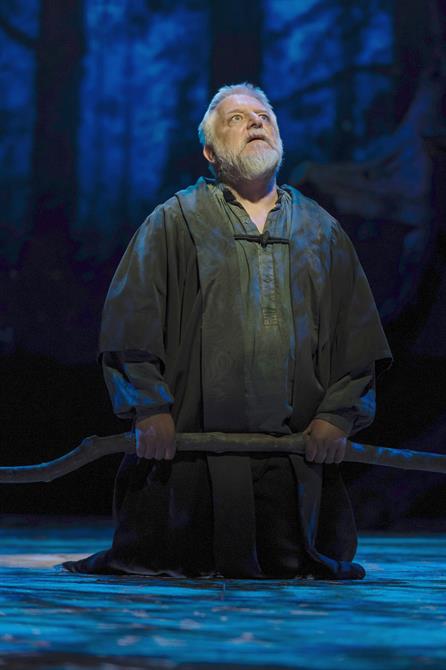 The trio who are normally at the heart of this story – Prospero, Miranda and Fernando – are moved a little from the centre of attention by all the computerisation but on the whole they also stand up well under the weight. Daniel Easton as Ferdinand does all that is required of him. Jenny Rainsford as Miranda being exposed to regular male human beings for the first time is charming and humorous by turns. 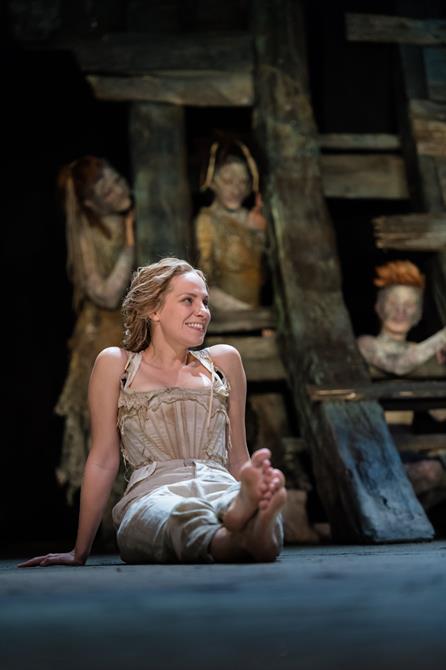 Miranda and the spirits

Ultimately, I think whether you judge this production a success will not depend on anything to do with the live motion capture and the projections but whether you warm to the performance of Simon Russell Beale as Prospero. He is a very different Prospero than the one presented by Jonathan Slinger in the last RSC attempt at this play. David Farr and Mr Slinger seemed to have more of a grasp on the way that the use of magic and wizardry was changing Prospero for the worse than is seen in this production. However, that aside in the way that Simon Russell Beale has chosen to present Prospero, he manages to be very effective. His words are measured and his demeanour full of weight. He is a good choice to root this production in more than the modern magic.

And so whether you have opportunity to see “The Tempest” in Stratford-Upon-Avon or in its imminent transfer to London if I were you I would go. It is not as strong as Doran and Sher’s Lear but it is much better than many of the things that have been brought forth from the Shakespeare plays by the Royal Shakespeare Company in this year that is about to close.