Or postmodern Shakespeare layered deep in irony. Or some such.

What: Troilus and Cressida

Where: The Swan Theatre, Stratford-Upon-Avon

A joint production by the Royal Shakespeare Company and the Wooster group. Shakespeare as we all know is out-moded and irrelevant and the audience for his plays do not know what is good for them. Thankfully, the RSC have teamed with the Wooster group to show us the way.

In July, I received a letter from the RSC explaining that there were changes afoot in their production of Troilus and Cressida. Rupert Goold who was supposed to be directing for the RSC had dropped out due to “unforseen” circumstances and Mark Ravenhill would stand in the breach. Something smelt wrong in the state of the RSC……….

Tonight as I stepped in to the Swan Theatre and saw a tee-pee at the back of the stage something gave me that quiver-ing feeling again and I hoped that this wasn’t going to be one of those nights.

Of course, it was just that the link between the ancient Trojans and the native Americans had previously escaped me.

Wig Wam Bam going to make you my man.

Wham Bam Bam going to get you if I can

Sorry, don’t know what came over me. A few minutes later I am listening very hard to Greg Mehrten’s Pandarus setting the scene for tonight’s production. I say listening hard because despite the use of a lapel mike his voice doesn’t carry very well to the second row. Perhaps it is better for those in other parts of the auditorium who are better placed for the speakers (of the electronic kind). Ah, well, Hiawatha never bothered too much about Minnie Ha-Ha and her tender touch.

A little later, Pandarus and Cressida (Marin Ireland) are a-top the tee-pee reviewing the Trojan men as they pass by. I think that Hector and Troilus came out well but it was difficult to tell for alas Pandarus is softly spoken – oh- and Priam (Bruce Odland) was just down stage-right beating a drum and chanting out loudly in authentic native American style which was a shame but it is not like the words in Shakespeare matter very much —- but for those who were counting the Wooster group handle their iambic pentameter very well even if you can’t hear the dialogue. There are, of course, exceptions to this, notably Scott Shepherd who plays Troilus and can be heard everywhere doing a very passable version of a slightly metallic tinged voice of the kind that has been made popular amongst robots everywhere. 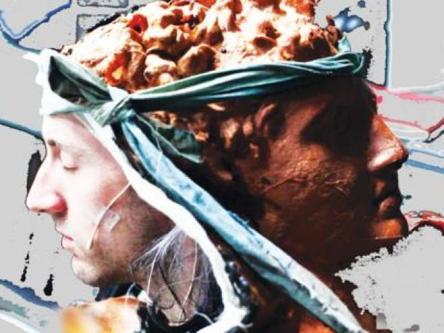 The Wooster group as the Trojans (who are closely related to the American Indian)  have captured their costumes just right. In fact, there were times that they evoked the spirit of the Native American half of the cast of The High Chaparral exactly. The chanting and singing is just right too and of course the American Indians are bursting forth from ancient statues which tells us something about the human condition. They show us this by wearing Greek-style statues cast out of rubber on their backs. Very clever, very admirable. 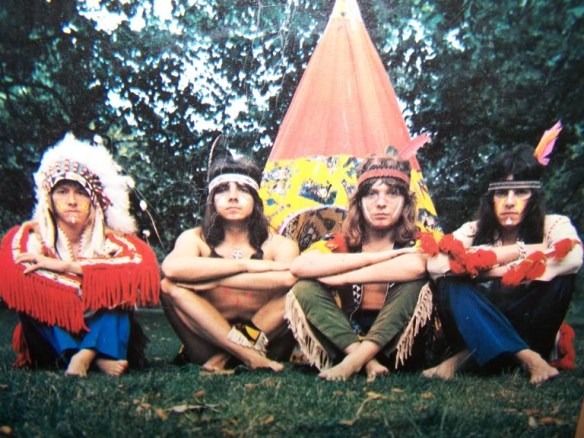 It is now time for us to meet the Greeks who of course are dressed as modern USA soldiers. They are led by that very fine character actor, Danny Webb, who must be wondering what he is doing here. Better still is Scott Handy as Ulysees who is over-acting for England (or perhaps Greece) and doubles as Helen of Troy. Two of the great beauties of history – Cleopatra and Helen – have now been captured magnificently by RSC’s casting department in the last few years. Handy, if it is at all possible, tops the rendition of Antonio he gave in the RSC’s most recent Merchant of Venice.

One of my favourite Greeks (who are of course closely related to modern Americans – war-like behaviour and empire building never does any good) is Aidan Kelly as Ajax. Ajax, of course, looks rather like Hulk Hogan or some other American wrestler for reasons that are so basic you surely don’t need me to explain them. He is contrasted with Joe Dixon’s Achilles who doesn’t need a body stocking to look muscular and is wheeled around on a gurney.

Also important is Louie Spence’s depiction of Menelaus (oh, wait the programme says the part was played by Zubin Varla, looked like Spence to me). Very tellingly, Varla spends the whole play in a wheelchair with his lower legs tucked under himself (in a manner most successfully used by Stanley Laurel in “Soup to Nuts” in 1928) and is variously dressed in all manner of frocks and wigs and with an increasing number of wounds. You don’t need me to tell you how profound this.

Anyway at 1 hour 35 minutes (I wasn’t watching my watch, I was too wrapped up in the play), the interval finally comes along and I wander outside to listen to Haysi Fantayzee’s John Wayne is Big Leggy and admire that Andy Scott guitar solo once more on another record I’ve forgotten the name of but which keeps coming to mind for some reason.

Sorry, I’m drifting off again. The stem ginger ice cream is awfully good by the way but was a little hard. Too long in the freezer, I guess.

Well, I returned to the theatre for the remaining two hours of the production. Less seats were taken now so I could spread myself out a little more. Oh, frabjous joy!!

Little had changed in the second half. Achilles sometimes wore a full length red number, cut to the high thigh and low cut at the breast in a very profound way.

The worst part of an other wise awesome production of the play was Ari Fliakos who managed the ridiculous combination of being a (semi-) believable native American and seeming to take the lines that Shakespeare wrote seriously. He was also quite likeable and the audience seemed to warm to him – which kinda defeats the object. He needs to try harder – it is not like the text is holy writ. Also there are parts to be gained in the remake of Bonanza. He will never get to burn that map of the Ponderosa if he carries on like this.

And then Cressida removed her dress (nice breasts!) and Menelaus stripped naked. The children who had been present in the first half of the play had already left or this could have been really interesting. The RSC and Wooster group had, of course, ensured that there was nothing in the programme about full frontal male nudity. That would have been churlish, oh and so unartistic.

The Oriental lady in the front row, left hand side of the stage managed to lean very, very, very, far forward in her sleep without actually falling off her chair. The cast took two bows.

The Telegraph gave this performance a 4-star review

3 thoughts on “Remixed Shakespeare for the hip-hop generation”