What: Judie Tzuke in concert

Martletts Hall in Burgess Hill has become a regular stopping point for Judie Tzuke on her (almost) annual tours around the UK and tonight it is the opening night venue.

Ms Tzuke has been through a difficult time health-wise recently and so this return to the stage is, perhaps, doubly important for her as she reconnects with her audience and steps back out into the public eye after a time away.

At the outset, it is perhaps best if I confess to a little bias here. I have been attending Judie’s concerts for over thirty years and buying her albums for longer. I can’t be considered a neutral and I’m pulling for her for the night to go well from the outset.

The night’s activities are opened by Bailey Tzuke, daughter of the main act, who will join her later for a spell as backing vocalist. She played a short acoustic set. Bailey is accompanied by Ben Mark, on acoustic and electric guitars. Her voice is crystal clear and it is a shame that she hasn’t had more exposure for her songwriting craft and her delightful vocal style. She delivered a short set, only slightly marred (no pun intended) by a lacklustre version of the Smiths “There is a Light Which Never Goes Out” which really didn’t need to be covered. 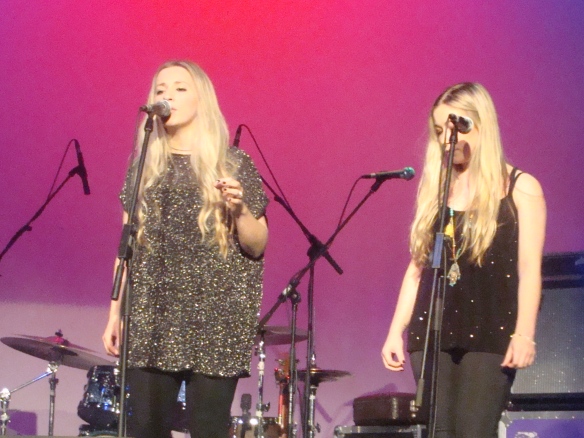 After an interval and some encouragement to warm applause from Vin Goodwin (tonight’s M.C.), Judie entered the stage area and led off with  “All at Sea” which debuted on her “Songs 1” album a few years ago. Tonight, it is a simple acoustic version, once more accompanied by Ben Mark, which was all the more poignant for the stripped-back nature of the music.

The remainder of the six-piece band entered for the second song, “One Tree Less”, which is the title track from her most recent studio album and was given a vibrant, full-force treatment by the band with drums and keyboards combining to give this a high energy gloss. The song has obviously benefited from the time spent in the rehearsal studios.

Over the last year, Judie Tzuke has chosen to keep in touch with her fan base via an unusual avenue. She has, during her recuperation, been sharing one song per month through a Song Club which listeners could subscribe to and keep up with songs which otherwise wouldn’t make it to a finished album. One of these is “So Emotional” which was performed live for the first time tonight. I don’t know the circumstances of its composition but it is heartful and may well reflect that time of illness she has been through. The performance was dominated by the keyboards and vocals and was another strong point in the night’s proceedings.

Judie has always been a marvellous songwriter but it wasn’t until the “Wonderland” album, in 1992, that I felt that she had really achieved a production sound that suited her voice. Her debut “Welcome to the Cruise”, produced by John Punter, whilst being her best known and most successful  album, always seemed, to me, like a smorgasbord of styles looking for a direction. The next five albums or so seemed to see her record labels pushing her more and more to fill a “rock chick” image as the sales declined. Set free from some of those commercial considerations, “Wonderland” was a breath of fresh air and here we were treated to “Man With A Gun” which combines a dark lyric with a bright and hopeful melody and vocal. Tonight’s performance of the song caught the spirit of that original recording perfectly.

A recent song “The Other Side” and an early ballad “Come Hell or Waters High” (from the hit album, I Am The Phoenix) showed the breadth of material on offer tonight but some of the tight energy which the band had displayed on the first few songs had drained away a little and it was perhaps time to change things up a little.

Judie had two aces up her sleeve in this regard. The first was her disarming stage presence and charm, laughing and giggling over confusion about the set-list. Purporting, believably, to be very nervous about this being opening night whilst simultaneously seeming perfectly at home on stage amongst her daughters and friends. The second was a move away from her own material to a cover of a John Martyn song “May You Never” for which all of her band moved to acoustic instruments to develop a folky treat. Both Bailey and Tallulah took lead vocal turns with Judie on this one and it was wonderful. Her original cover of this song featured on the “Beauty of Hindsight” album.

Ms Tzuke rounded out her first set with a new song, “Woman Overboard” which will be the title track of her new album when it is finished. The melody is not as obvious as on some of her compositions and the lyrics reflect the tough times that recent events have brought.

Ten years ago, Judie recorded an album called “The End of the Beginning” which seemed to mark a change of direction for her career. She concentrated more from that point on her songwriting with rising artists and how her songs might help them develop their careers. She gave songs away and the two albums that were released during this period “Songs 1” and “Songs 2” seemed less clearly conceived as albums in the old sense and more collections of the songs that were around. One of the songs that she wrote during this time was a co-project with the band, Morcheeba and it was “Enjoy the Ride” which opened the second set tonight. Tonight, it was given a joyous and high energy performance and the backing vocals from Bailey and Tallulah were a treat. A live performance of this song can be found on Judie’s live album “The October Road”.

Speaking of “The End of the Beginning” album, the song “Jerry McGuire” from that disc was featured tonight. It has never been one of my favourite Tzuke moments but tonight it benefited from a slightly different arrangement.

Another song which underwent a radical re-working was “Tonight” which originally featured on the “Secret Agent” album. A different rhythm and re-worked keyboards brought a new momentum to this number and prepared us for a big climax to the show.

“Bring the Rain” from “Welcome to the Cruise” and “Living on the Coast” from “Sportscar” were two of the older numbers which were given a run out in the second half of the set but it was “Stay With Me Till Dawn” which inevitably drew the greatest cheer from the near capacity audience. When we take in to account the encores (which I will come to in a minute), it was that debut album which was most heavily featured during the show. For myself, whilst I can understand that to exclude “…Dawn” might have left the casual attender feeling a little cheated, I would have rather heard  other material than some of the other songs from that album – perhaps something from the other successful albums like “Shoot the Moon” or “Ritmo” or “I’ll Be the One”, the beautiful single from 1985.

The main set concluded with “If (When You Go)” which debuted on the career retrospective “Moon on a Mirrorball”, a few years ago. After that, Ms Tzuke left the stage to a rapturous standing ovation only to return quickly for the obligatory encores.

Most everything which had been tried in acoustic mode tonight went well but the same couldn’t be said for “For You”. This song has always been a complicated one to perform live and tonight’s idea of having the whole band on backing vocals whilst Tallulah Tzuke handled the second vocal, was the least successful way of handling it that I have come across. It will need a good deal more practice before this is an ideal exercise in timing and balancing one voice against six.

Thankfully, this wasn’t the end and the audience were served up a buoyant version of “Sukarita” to round-up the festivities before another round of standing applause and then the rush to get a train back to London.

“Woman Overboard”? Well, no. This live show sees Judie on familiar territory despite the trials of recent days and with an exemplary return to the arena of live performance. Surely the energy and quality can only grow as the tour continues.