Who: Daughters of Davis, supported by Lánre

About a year ago I heard an interview with a fairly major music industry figure who when asked what he would like to be doing if he wasn’t doing that interview, said he would like to be at home listen to the harmonies of the “Daughters of Davis”. Time to find out about the Daughters of Davis, I thought. Located them on the internet. Ordered their cd and dvd (I’m the archetypal guy who like to have the solid item in both hands. Not much time for mp3s here). Nearly a year later, it’s time to see them in concert. Can they cut the mustard live?

It’s worth noticing that both artists on tonight’s bill have a spiritual interest going on. Nothing preachy, you understand, but a definite flavour of trying to trace the paths of what life is all about and some kind of deeper meaning. Now when this is happening there is always a danger that the stage can become some kind of confessional. Whilst the show saw performers becoming a little emotional they didn’t go too far down that road and what we came away with was, first and foremost, the music and music of the highest quality.

Warming us up was Lánre who comes via Stoke-on-Trent and Nigeria to London.She carries that Nigerian heritage well and there is little trace of the Potteries. Her forty-five minute set sees her dip into Urubu (I hope I got that right!) but most of the set is in English and is therefore very user friendly. She is a gifted vocalist with a rudimentary talent on guitar which for an acoustic show like tonight will do very well thank you. She features all five songs from her current ep “Home” as well as a smattering of other compositions. Of these “Stone Collector” and the title track perhaps show themselves as the strongest. On some of the material the songwriting seems a little thin and perhaps this is something she needs to work on but all-in-all tonight shows off her talents to good effect. There’s a little flavour of Joan Armatrading here and also something unique. Plenty of promise

Daughters of Davis need have no concern about the standard of their songwriting. They have 23 songs across their two albums and I think I’m right in saying that they wrote the lyrics on 22 of them and co-wrote the music on them all. Tonight, they serve up a mix from both albums along with a few covers across two sets which make for a tasty feast indeed. 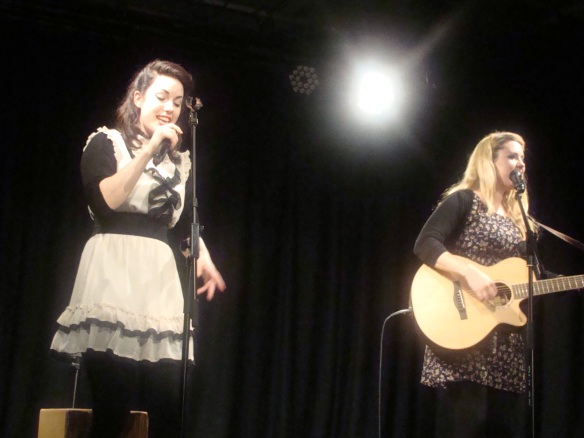 What were some of the highlights (in no particular order…)?

British Soul. Title track from the second album and a real tour-de-force of songwriting and vocal performance. With Daughters of Davis you soon learn that the vocals are everything. It’s a rather wonderful mix. Fern has the more mannered and effected voice. Adrienne is the more straightforward but might be the stronger of the two… just. But you need both to create that effect.

Heart Locked Up. Great little acoustic number from the first album which is captured exactly during the performance. There is a romantic tale behind it that I won’t spoil but there is an ache in the vocal that is so genuine and so sincere.

Catch Me If You Can. Silly bit of lyrical fluff from the second album which manages to capture something of what is charming about tonight. It also allows Fern to become more animated which is necessary to create a little more stage presence alongside the more static Adrienne. As I say, these girls complement each other.

Take My Soul. Powerful and poignant number from the first album which captures that spiritual undercurrent that I mentioned earlier. Great lyrics, little pretense and more strong voices.

Footprints. The ladies explained that this one was based on a poem that I’m familiar with. The song is a lot less twee than the poem and, again, it is grounded in such a deep and real experience which is communicated in every syllable of the song.

The River. A great lyric and powerful musical performance. There’s a depth in these songs that you don’t hear coming across in much self-composed material these days. There are some great songwriters out there and some great performers but these ladies if they persevere might just be the complete package.

What else was there? A lot. Great guitar, nice ukelele, strong percussion — and only two people on the stage.

Oh and let’s not forget the covers. Some Otis Redding, some Michael Jackson (two songs might have been a little too much, one would have sufficed), a little Ellie Goulding and a revamped hymn (yes, that Amazing Grace).

There was a reason why the crowd were in raptures afterwards. One very good performance, one great performance. Good venue, tremendous acoustics. Not sure what more a Saturday night could provide. 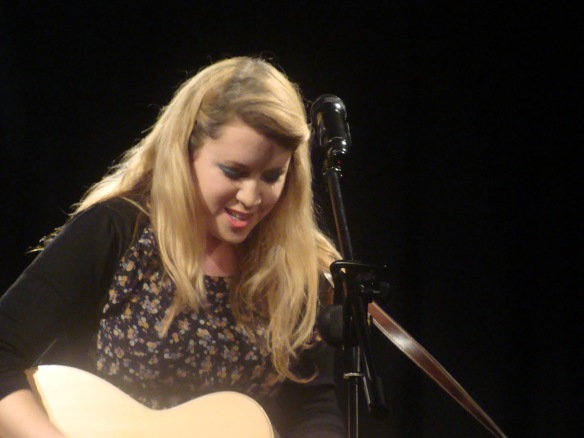