September was never going to be an easy month for the Yankees. On one hand, they had to contend with the grand parade that was associated with the retirement of the Captain, Derek Jeter. On the other, they had to make up sufficient games to challenge for a wildcard. It would have proved too much for most teams but for the Yankees who were already over-performing given the weakness of their batting lineup, it seemed impossible. And so it was, they achieved a 14-13 record on the month whilst giving Jeter the send-off he deserved. One target achieved, the other not. But perhaps this was for the best – they would have probably embarrassed themselves in the post-season. Let’s look at who did what:

The Yankees used four players behind the plate in the final month. It was quite a revealing time. Francisco Cervelli, returning from a time out with cluster migraines, did extremely well with the bat but this month he seemed to have lost his power. All his hits went for singles. Still, it is difficult to gripe at a .367 BA. When the Yankees look toward next season, they need to look at Cervelli’s health concerns. He has had a series of concussion issues over several seasons and now this migraine problem. His days with the “tools of ignorance” may be limited and he may provide some team in another city with a useful designated hitter option. 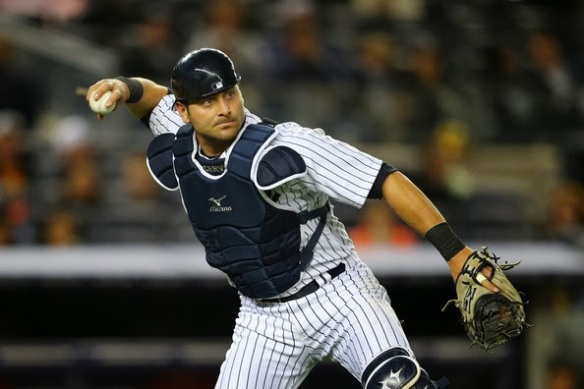 Cervelli – Days as a catcher limited?

John Ryan Murphy would be another useful catching option for next season but also a possible useful trade chip. He could be the starting catcher on a team that wanted a young, strong defensive, singles-hitting backstop. Like Cervelli, there was little power in September but he hit .278 and youth is on his side.

Austin Romine looks very much at the end of his time in the Bronx. He did okay in limited playing time in September but he is very much fourth in line and he should look to find a bench slot on another club next year.

And then we have Brian McCann. McCann has really struggled to hit for average in 2014 and September was no different with him only achieving .222 on the month. But what was significantly different was a real upsurge in his home run hitting. He was second on the team in extra base hits in September and all eight of them cleared the fences. Senior management are making noises that indicate McCann has done enough to earn a second chance in 2015, so the major question is who will take that bench slot and the Spring Training run off seems to be between Cervelli and Murphy with the loser likely to be headed for a new home.

The Yankees, as a whole, only hit .224 in September so there were obviously a considerable number of players who did not perform and the story begins and find its centre in a deeply flawed offensive performance by the infield.

Mark Teixeira had more injury problems in the last month and, perhaps, he has been rushed back too early in the healing process. He batted .178 in September albeit with two doubles, one triple and two home runs. It has been another very below par season for Teixeira and there has already been talk of him sharing time at first base in 2015 with the returning Alex Rodriguez. That speaks loudly of the conundrum that Teixeira has created for himself in the Pinstripes. Too big a contract to trade, so weak a performance that the Yankees don’t necessarily want to play him every day even if he is fit.

The fact that the Yankees don’t see A-Rod automatically returning to 3b speaks of many things. His age, his absence from the game for a year, the fact that the Yankees would rather not have him back at all — and the performance of Chase Headley at that particular corner of the infield. Headley has performed better for New York than he did for San Diego and there will be serious consideration as to whether the Yankees should try to re-sign him. In September, he appeared in 22 games with a .279 batting average, five extra base hits of which three were home runs and an above average performance in the field. Those are pretty strong credentials and the Yankees should be able to pick him up for less than he was paid for 2014. Food for thought.

If Headley and others were good signings during the season, then one who wasn’t was Stephen Drew who joined the team at the trading deadline, having been mired in a huge slump in Boston and somehow managed to lower his production – and September may be as bad as it got. There was talk that he might be the guy to fill the shortstop role vacated by Jeter. That nonsense should be silenced now.

Meanwhile, Derek Jeter collected less hits in September than he did giveaways from the stadiums he visited on the roadtrips. He managed .230 with a smattering of doubles. He has been a marvellous Yankee but he has chosen the right time to hang up his cleats. 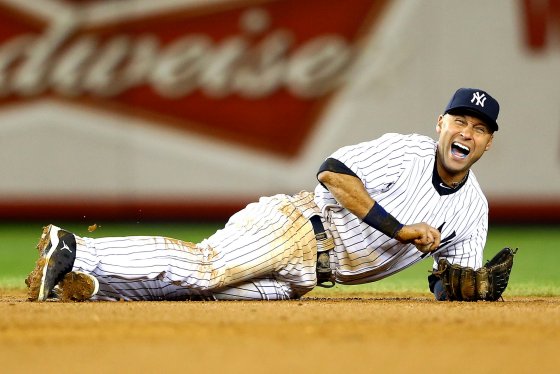 The horrible performances of Drew left more and more opportunity for Martin Prado to return to an infield role. When he was first signed (also at the trading deadline), he was seen as someone to help out in the outfield with the occasional infield game even though his career to that point had mostly been spent at third-base and second-base. As Drew’s stock diminished, Prado’s showed substantial gains and September started as the best yet. He hit .433 in 9 games and then when it seemed he was on the cusp of even better things, he was rushed to hospital with abdominal pains and an appendectomy prematurely ended his season. He should be guaranteed to be in the Yankees mix for next season.

Jose Pirela was a late season call up from the minors and did well in every regard. His .333 batting average with some power gives him an opportunity to impress in Tampa spring games next year. 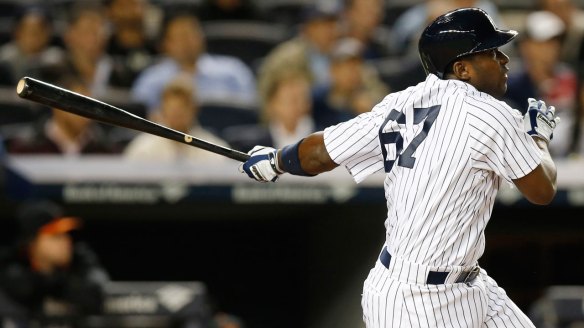 Jose Pirela – one for the future?

Also making up the infield numbers were Zelous Wheeler and Brendan Ryan. Ryan was great in the field and the Yankees will continue to make noise about him “possibly” being next season’s shortstop until they sign someone else. Wheeler had his worst month since his call up from Scranton (Triple-A). Neither player will be much in the reckoning in 2015, although the Yankees like Ryan enough to guarantee him a bench role.

The mix in the outfield changed quite dramatically for the Yankees in September and their approach to the offensive work of that group of players did too. They brought in Chris Young (who was released by the Mets), and Eury Perez (who was claimed off waivers from the Washington Nationals) and called up Antoan Richardson from the Railriders. Richardson brought a lot of speed to the line-up and led the team in stolen bases in September and Young proved a real sparkplug, with speed on the basepaths, timely homeruns and vigour although he rather cooled off by the end of the month. Perez was less successful. 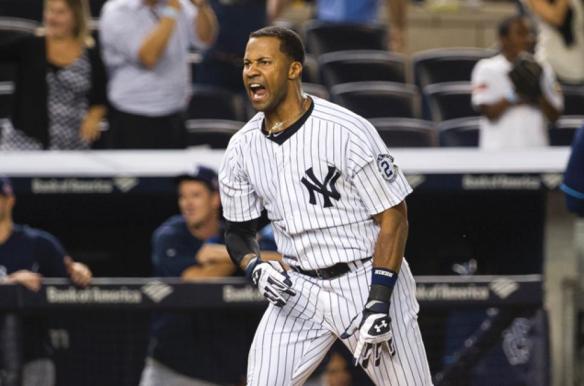 Chris Young – he got things moving.

Of those who spent the season in the Pinstripes, there were decidedly mixed fortunes. Ichiro Suzuki, who has probably come to the end of his time in the Bronx, hit for average and stole four bases. Jacoby Ellsbury who had probably been the Yankees best offensive player across the whole season suddenly hit a slump He then reported with a hamstring injury and he became another whose season ended early. Both Brett Gardner and Carlos Beltran  also missed time in September. Gardner suffered an abdominal strain and Beltran headed for season-ending surgery. Neither player troubled the .200 batting average line during the final month and it is time to look forward to next year, perhaps.