Gregory Doran, the new artistic director of the Royal Shakespeare company, has barely put a foot wrong since he took over the role – and it has to be said that prior to the new appointment there had been a certain loss of direction. But in this new production, which I think is very solid and good, he seems to have based some of his thinking about it on a doubtful premise.

The RSC are currently promoting “Love’s Labour’s Lost” and “Love’s Labour’s Won” as a double-header in a similar to the way that they promoted Henry IV Parts One and Two earlier in the year. And here lies the problem. “Love’s Labour’s Won” was (last I checked) one of Shakespeare’s lost plays. Mr Doran wants us to believe that he has identified the lost play as “Much Ado About Nothing” and to prove it he has retitled “Much Ado…” as “Love’s Labour’s Won”. And he invites us in the programme to test his theory. Well, I’m sorry, I tested, tasted and I’m not buying it.

Now placing the production of “Love’s Labour’s Lost” under all this baggage is unfortunate because if it is allowed to stand alone, it would be a well-acted, well-thought out, accomplished production, well-directed by Christopher Luscombe.

“Love’s Labour’s Lost” strikes me as an interesting premise which in its own right comes pretty close to striking at what might have been the dilemmas of Shakespeare’s life whilst “Much Ado About Nothing” is a much slighter, if amusing bit of fluff.

Here’s what I mean. Shakespeare’s lifetime was a time of religious transformation in England. Religion was developing but was unsure what to do with arts and the theatre. William Shakespeare had a clear knowledge of Christian teaching but his philosophy of life was expressed in his plays and he had a clear devotion to the theatre. In “Love’s Labour’s Lost” he rounds on those (including the church) who would develop their philosophies of life by denying and abstaining from beauty and physical love in pursuit of something higher and more spiritual – seeing it as a false and unhelpful dichotomy.

In “Love’s Labour’s Lost”, he mocks four men, the King of Navarre and his three friends who have set themselves the target of dedicating their lives to higher learning by abstaining from contact with women for three years. They find that on the day their agreement begins each falls in love with a woman from the French court (the Princess and her three friends) and spend the rest of the play trying to get out of their solemn pledge – first without their colleagues discovering their duplicity and then as a team.

This seems to be working until we reach the denouement when the death of the Princess of France’s father has to be announced and the arrangement of one year on-going separation is decided upon. The audience is pulled up short by the sudden and startling and abrupt change in mood as the rest of the play and the conclusion do not blend well.

But let us not lose sight of the fact that this self-imposed problem aside, this is a good production. It has a witty humour and some great performances. Edward Bennett, who had to sub for David Tennant as Hamlet some years ago, give us a wonderful Berowne and Sam Alexander as the King of Navarre is very good and accomplished. Both Mr Alexander and Mr Bennett were in a previous production of the play for the RSC and bringing them back for 2014’s rather different production is a good choice.

Of the female half of the cast I particularly like Flora Spencer-Longhurst as Katherine who brings a vibrancy to the role. Michelle Terry (Rosaline), Frances McNamee (Maria) and Leah Whitaker (the Princess of France) form a good team around her.

The comedy here is centred around John Hodgkinson as Don Armado whose Spanish accent is sometimes a little difficult to fathom. Fortunately, he has a good foil in Nick Haverson as Costard who is a kind of bastard son of one of the Chuckle brothers. Also well-worth noting is Chris McCalphy as Dull who is here attired as a traditional British bobby – a notion which brings us to the era that this current production is set in. 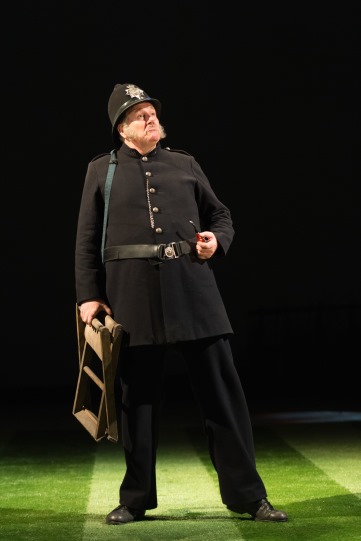 The whole play is set in the grounds and study of an English pre-Great War stately home and whilst the actual staging has much to do with that niggling desire to draw this play and “Much Ado About Nothing” together, the actual design and props must be commended – right from the design of the various rooms to the teddy bear that accompanies Dumaine. Simon Higlett’s design has the touch of Midas about it. Jeeves & Wooster meets Brideshead Revisited, anyone?

So a good night out? Yes. A good , solid production with some outstanding acting? Indeed. A few too many full musical productions for what after all is not a stage musical? Perhaps.

And another performance piece of a song…

Convincing evidence that “Love’s Labour’s Lost” and “Much Ado About Nothing” need to be in partnership and are a marriage made in heaven? Not a moment of it.