Mostly Hackett but things turned a little Autumnal too.

It was February 1984 and a close friend and I went to see Genesis at the NEC in Birmingham. Collins, Rutherford, Banks. I’d been a Genesis fan for about six years. Loved “Seconds Out”, “Wind And Wuthering” and “Duke”. Didn’t like the production on “Trick of the Tail”. Found “….And Then There Were Three” a bit of a mixed bag. Then I discovered the Gabriel years and my perception of the band began to change. “Trespass”, “Nursery Cryme” and “Foxtrot” joined “Duke” as my favourite Genesis albums.

And then one day I bought “Abacab” and I just didn’t get it. Some of the songs from it sounded better on “Three Sides Live” and so I persisted. Then there was the “Genesis” album (the one with the shapes on the cover and which opened with “Mama”). Didn’t much like that one either (although “Home by the Sea / Second Home by the Sea” and “It’s Gonna Get Better” came as some kind of blessed relief…. and then there was the night at the NEC.

Now the time I spent freelancing for publications like Melody Maker and Sounds in the late eighties and early nineties soon dissuaded me that there was anything akin to an objective review. People pat the artists on the back they already like and slag off the artists they already hate and occasionally we discover something new to love. So in the spirit of subjectivity I have to say that, in my view, Genesis that night were terrible. The low point was when the whole band stuck on fake mustaches for “Illegal Alien” but there wasn’t much else to commend. The quiet guy who used to sit behind the drumkit had allowed his solo career to turn him into some self-obsessed monster and….. well, I really didn’t enjoy it. I expect my friend did and he followed the band right through “Invisible Touch” and “We Can’t Dance”. I pretty much gave up on Genesis that night and being my reactionary young self (oh, how much we know when we’re young), it took me years to even get back to listening to the albums I love.

Over the last few years, I’ve spent a lot of time listening to “Trespass” and those other early albums and rare tracks like “Twilight Alehouse” and “Happy the Man”. I enjoy Rutherford’s “Smallcreep’s Day” and Banks’ “A Curious Feeling”. Gabriel’s second and third solo albums are glorious moments. I’ve begun to enjoy more and more Steve Hackett and having dwelt a long time on one of his recent solo albums “Beyond the Shrouded Horizon”, I decided to pick up “Genesis Revisited II” and found it more to my palate then the first that he did in that series. 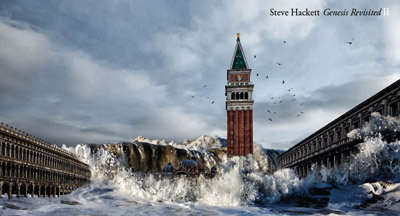 All of this led me to Saturday night at the Hammersmith Apollo to see “Genesis Extended”, my first Genesis related concert (aside for a whole bunch of Mike + the Mechanics show, which frankly had more to do with my liking of Sad Cafe than Genesis) since that day just after my 19th birthday back in 1984, all those years ago.

So first let’s talk about the support act. I’ve caught Mostly Autumn several times over the years but this time they are in a stripped back formation, featuring just their two principals, Bryan Josh and Olivia Sparnenn. Now I saw Olivia the first time she was pressed into action as lead vocalist for the full band, several years ago, when then band front-woman, Heather Findlay, reported in sick. Suffice to say she is much more confident these days and Mostly Autumn produce an excellent if rather truncated set.

They opened with a pleasant version of “Simple Ways” from the “Passengers” album before really hitting their stride with “Evergreen”. “Heroes Never Die” from their 1998 debut is then sandwiched between two songs from their latest studio release. “Heroes Never Die”, a tribute to his late father still visibly moves Mr Josh all these years on and whilst his voice might not be to everybody’s taste, for my money it provides the ideal shade to the light of Ms Sparnenn’s.

“House on the Hill” is perhaps the best moment of the set, filled as it is with memories and a sense of great longing. They round out with “Dressed in Voices” which is tastefully done and then they’re gone and it is time for the stage to be changed around. They’re enthusiastically received by some of the crowd but too many were still milling around in the foyer with just the merchandising and the bar for company. Sadly, it seems that this will always be the lot of the support band no matter how good they are. 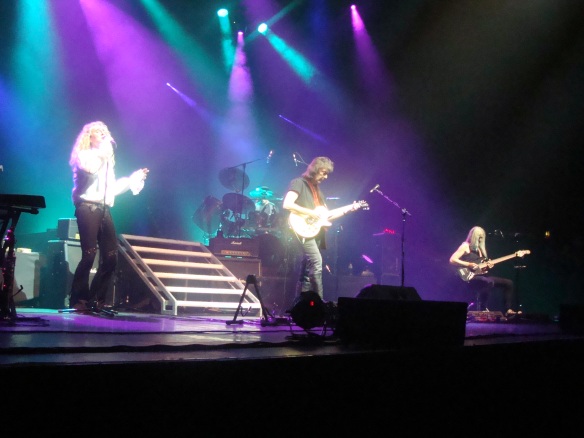 And so on to Mr Hackett. He announced near the beginning of the set that tonight was going to be all about the music of Genesis and he was faithful to his word. He covered the period from “Trespass” (surprisingly, since he did not actually play on that record) to “Trick in the Tail” (nothing from “Wind and Wuthering”) and it was most wonderful.

The band is made up of Hackett on 6-string acoustic and electric guitars; Nick Beggs (the man who started his career in Kajagoogoo) on bass, stick and 12-string; Roger King on keyboards; Rob Townsend on 2nd keyboard, flute and saxes; Gary O’Toole on drums and vocals; and Nad Sylvan on vocals.

Now the key to this show is the contrast between Hackett who is very self-effacing, very static, immaculate in terms of his guitar playing – every lick and melody exactly in the right place – and Nad Sylvan. Sylvan is charismatic, flamboyant, draws attention to himself and is everything that Hackett is not. Somewhere in all this, they prove the perfect partnership and with all the other musicians tight, well-rehearsed and geared to produce a marvellous sense of the classic music they are handling, this makes for a tremendous show.

It didn’t always seem like it was going to be that way. The show opened with a version of “Dance on a Volcano” which lacked a lot – even by the standards of a song that I’ve never particularly warmed to. This meant that the show’s encore would inevitably end with “Los Endos” which also was a little of a let down after everything else that had preceded it.

But if you remove the top and the tail then what you got was a dramatic and exuberant show. After a perfunctory “Sqounk”, we were into a version of “Dancing with the Moonlit Knight” which was immaculate beyond words. This was one of three points in the evening that I was left to reflect I didn’t think could be as good as they were. Sylvan matched Gabriel’s voice on the unaccompanied intro and once the keyboards from Mr King joined the vocal and Hackett played the lead parts, it was soaring, beyond belief.

Then we had two songs from “The Lamb Lies Down on Broadway”: “Fly on a Windshield” and “Broadway Melody of 1974” which featured Nick Beggs to great effect and then two from “Nursery Cryme”: “Return of the Giant Hogweed” and “Fountain of Salmacis” which reminded you just how much Genesis lost in the lyrical department when Peter Gabriel left. Mr Sylvan interpreted these songs with physical mannerisms and movements which were enough his own but also carried an echo of old video clips of 1972/73 that I have seen albeit without the face masks and more elaborate costumes. Lacy gloves, silver nail varnish and Camden town chic are more Nad’s way but he carries it well.

There were many highlights but another of my 3 “it can’t be this good moments” came with “The Musical Box”. Great drums from Gary O’Toole, more imaginative keyboard work from King and a wonderful solo from Steve.

A funked-up version of “I Know What I Like (In Your Wardrobe) didn’t quite work although Beggs and Townsend partnered to create an almost free-form jazz effect. Next out came Mr Hackett’s acoustic guitar and all went quiet as, when after a short improvisation with echoes of “Time Lapse in Milton Keynes”, he faithfully reproduced “Horizons” from the “Foxtrot” album. Wonderful! Now the logical next place to go was “Supper’s Ready” like it does on the album but no, Roger King played the piano intro to “Firth of Fifth” and Jakko Jaksyk joined the band to take over on lead vocals. I didn’t really warm to his voice and he had none of the charisma and style of Sylvan and I was very glad that he hadn’t been given the whole show. The musicianship was, however, something else. I’m running out of superlatives to describe the lead guitar work and Beggs once again showed what an essential part of this band he is. 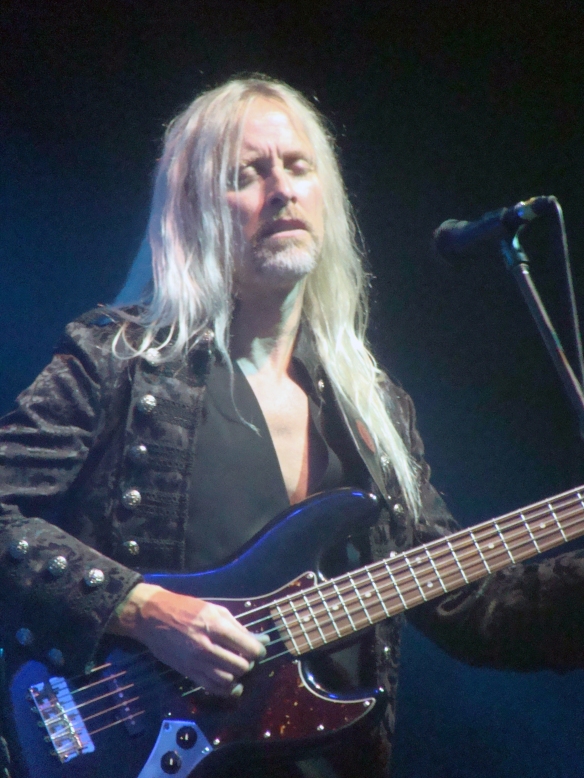 Next was “Lilywhite Lilith” which didn’t sound quite right but which Sylvan’s vocal carried. Much more successful was “The Knife” with Sylvan playing the part of the megalomaniac revolutionary leader with venom, and just a touch of insanity, coming over all “Macbeth” at the intro as he held a dagger before himself. And then…. Supper’s Ready. I’d been worried after “Horizons” that they weren’t going to play this but when the guitar tech brought the acoustic guitar out again after “Knife”, it was fairly obvious where the show was going.

That brought us to transcendent moment number three as the band nailed this exactly. It is a complex piece of music but every note, every beat, every melody, every time signature was in place. Mr Hackett played like a dream and Mr Sylvan interpreted each sections’ characters with style and panache. 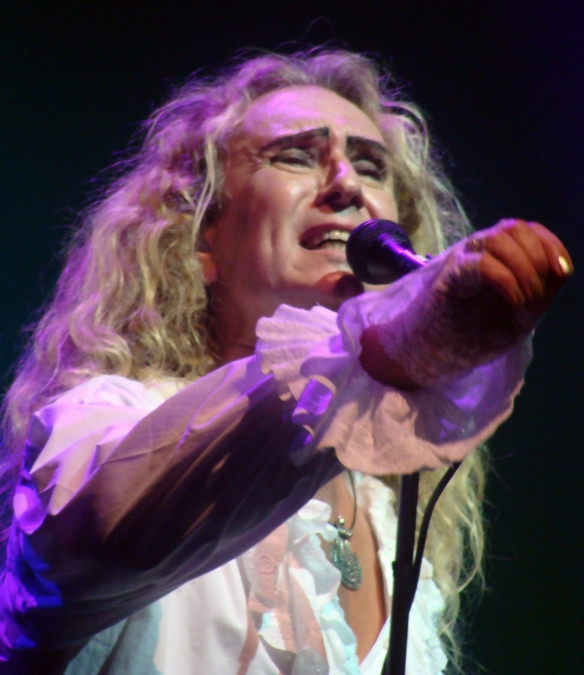 The band left the stage to a standing ovation. Sylvan returned to point a fold-out telescope towards the area above the stage and thundering keyboards and bass led us into “Watcher of the Skies” which is another one which has never been my favourite Genesis moment but this may have been the best performance of it that I have ever heard.

Then there was “Los Endos” and the band were gone and the audience spilled out into the night in ecstatic raptures.

There has been much talk over the last few years as to whether the five-piece Genesis of the “Nursery Cryme” to “..Lamb…” era will ever reunite. This has reached a crescendo with the recent BBC documentary and the strangely unthought out “R-Kive” release. Some at the venue were saying that there is a rift between Hackett and the other 4 because of the documentary. My sources tell me that isn’t correct and that Hackett’s disappointment and quibble is with the director to whom the whole band had given artistic control.

My thought though is that a five-piece reunion would not be quite what the fans want. Gabriel’s head is clearly in a different place and Collins’ can no longer drum for a full show. I recently caught a little section of the three-piece band’s reunion DVD “When in Rome” on one of the Sky Arts channels. Collins still made me shudder and the rest of the band played along. They couldn’t pay me to go and see that.

But this Hackett show is another matter. I wouldn’t want to see him doing this for the rest of his career as I think he has much new music to explore that is going to be very worthwhile. But while he is in the mood then this will do very nicely. A great show…. and I think I will take this over that mooted five-piece reunion any day. 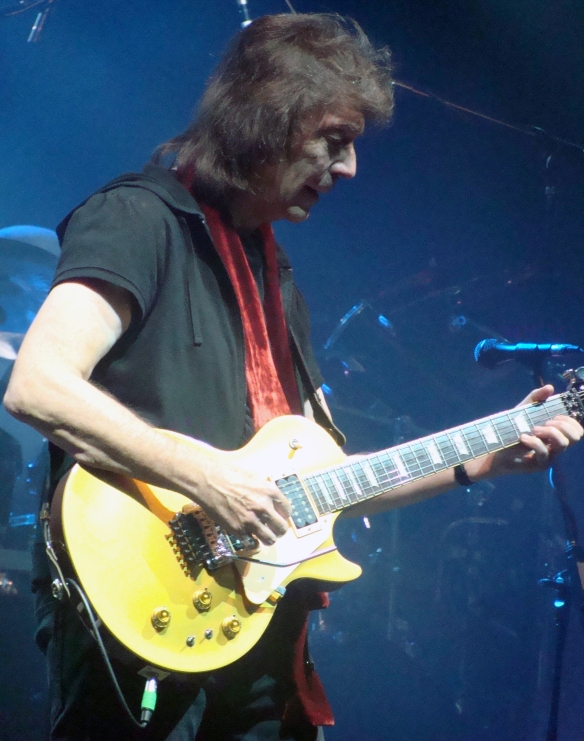 1 thought on “Time Lapse in Hammersmith”