When I was a boy, 10CC were often referred to, in the UK music press, as the British Steely Dan. I’ve never really understood that myself but given that I’ve recently been writing promotional material for some of the Steely Dan dates on their forthcoming U.S. tour, it seemed really appropriate that I should be sat in the second row of 10CC’s Royal Albert Hall gig writing a review of their show.

I was too young to ever see the original 4-piece incarnation of 10CC and to be honest the majority of the Gouldman / Stewart albums dwindled in quality after the first three or four – although I’ve always been rather fond of “Windows in the Jungle” of the post-Bloody Tourists records.

And it has been some 20 years since 10CC recorded a new album. A few years ago, I was involved in an album on which both Graham Gouldman and Eric Stewart played but it was fairly obvious that we weren’t going to get them to work together and so their contributions remained decidedly separate. Personal tensions, methinks.

So when does a band become a tribute band to its own glory days? Well, this is certainly worth considering. 10CC these days still have Graham Gouldman at their heart and they have Paul Burgess who was their drummer from their early live performances and Rick Fenn who has been with them from the early Gouldman/Stewart days but they have no new songs and no prospect of any.

So how was it? Well, it has to be said that it was excellent – very,very good indeed. What you have is a tight band, great arrangements, an entertaining show and this is so much better than it has any right to be.

The show began with a complete performance of the “Sheet Music” album from 1974. It has to be said that the audience were a little unsure of this. Their applause was cautious and sounded reserved but this was nothing to do with the way in which it was delivered. Mick Wilson has the “Eric Stewart-vocal” style nailed exactly and from the moment that the show opened with an excellent, exuberant “Wall Street Shuffle”, it was obvious to those who knew the album where this was heading – straight down Quality Street. Perhaps the problem was that too few knew the album and were simply here for a “Greatest Hits” show. That just made the band’s decision to take the show in this direction even more brave. 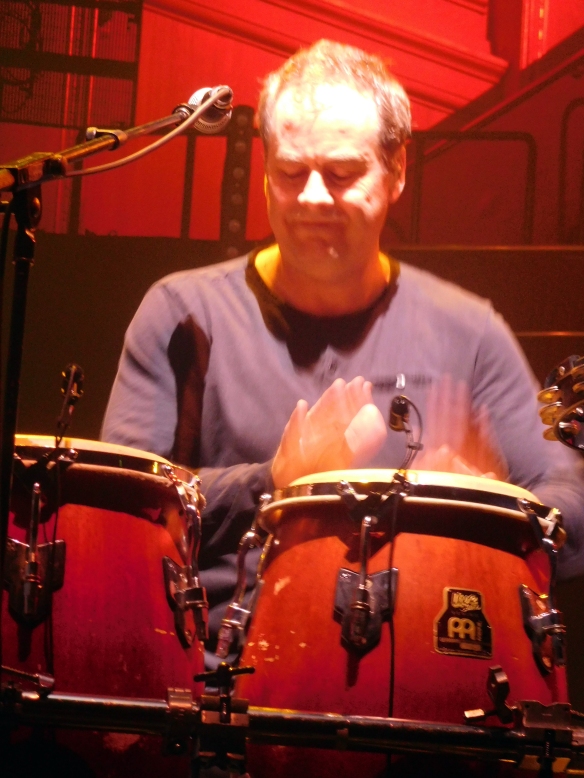 “Sheet Music” only has two hit singles (fairly customary for those days) and both were carried off with aplomb. The second was “Silly Love” which opened side two of the original record. Gouldman preceded it by joking that the band had to wait a moment whilst the record was turned over but this was another great live performance with bags of energy and the principle three front-men of Gouldman, Wilson and Fenn on fire as they shared the vocals. 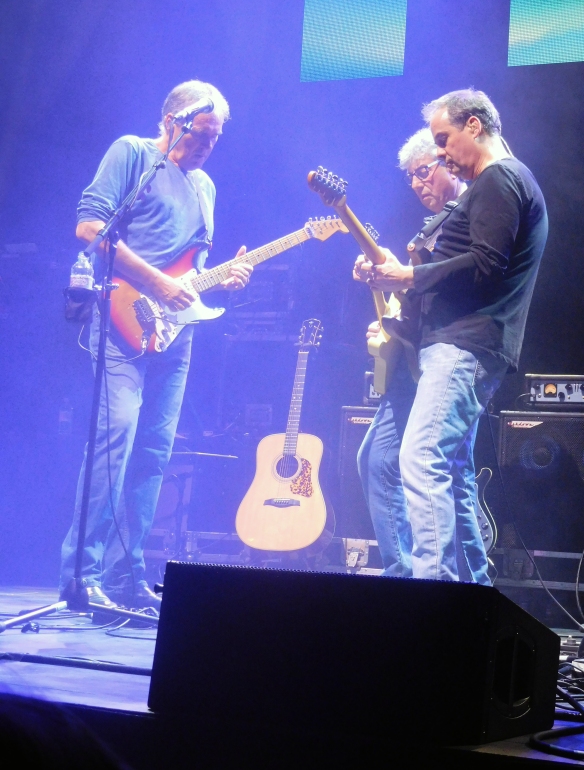 Before that had come the remainder of “side one of the record” the highlight of which was probably “Clockwork Creep” whose chorus was later lifted by the band for the intro to their hit, “I’m Mandy – Fly Me”. “… Creep” was witty, tight and highlighted by great visuals on the four part video screen behind the band.

During the final section of “Silly Love” you could just about see a backstage handyman creep behind the band to hook the four sections of the screen together prior to the performance of “Somewhere in Hollywood”. This was a huge highlight of the night as the band played the accompanying music to Kevin Godley who appeared on the screen to sing the lead vocal to a song of Hollywood nights which he wrote all those years ago with his erstwhile partner, Lol Creme. Kevin Godley, a ghostly presence on a video screen…

That he is more comfortable these days with Graham Gouldman is another chapter in 10CC’s complex back-story. None of this detracts from an exemplary performance, the visuals to which had echoes of Godley & Creme’s video work of the 1980s.

… and effective video imagery during “Somewhere in Hollywood”

Of the remaining 3 tracks from “side 2 of the record”, the highlight was probably Baron Samedi, a song which was inspired by a character in the James Bond film, “Live and Let Die”.

The audience was then left alone for a 30 minute interval during which the last few empty seats around us filled up.

The second set opened with a sprightly “The Things We Do For Love” with deep harmonies. This was followed by a good “Good Morning, Judge” but the band really, really hit its stride for the aforementioned “I’m Mandy, Fly Me” where they absolutely nailed the original recording for a performance which was a contender for the best of the night.

A humorous “Life is a Minestrone” may have been served up with parmesan but was far from cheesy. More rocky was “Art For Art’s Sake” which was topped-and-tailed by an exemplary guitar solo from Fenn.

But there was more here than just the hits. There was the lengthy suite-like “Feel the Benefit” which Gouldman steered in just the right direction and multi-instrumentalist, Keith Hayman added his own flavours and colours to. Throughtout the show, Hayman provided a vital element to the band’s authenticity.

After a nice “The Dean and I”, the band moved towards the necessary territory of their two no.1 hits, “I’m Not in Love” and “Dreadlock Holiday”. The former was the more convincing originally and has aged the much better of the two. 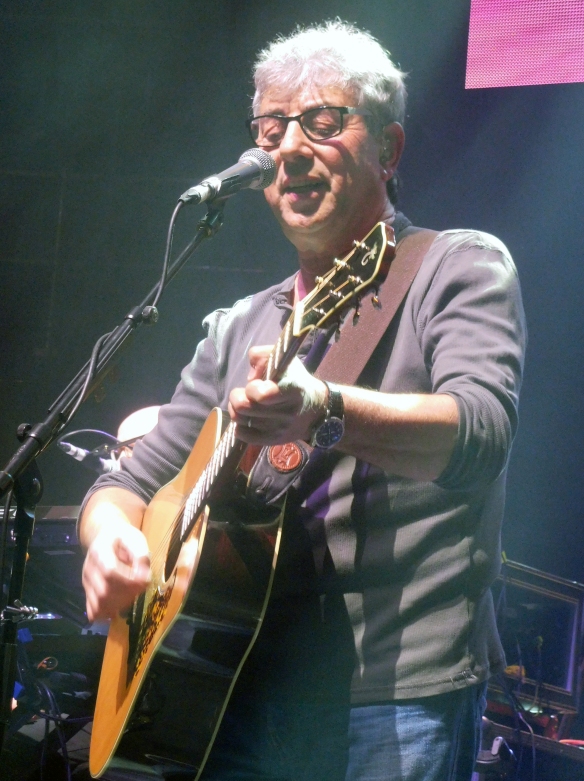 First of all there was “Donna” which was given a nice doo-wop twist which wouldn’t have quite given the bands that it was originally a pastiche of a run for their money but was good fun and well-done with Paul Burgess substituting a deep bass conclusion for the Lol Creme-falsetto of the original. 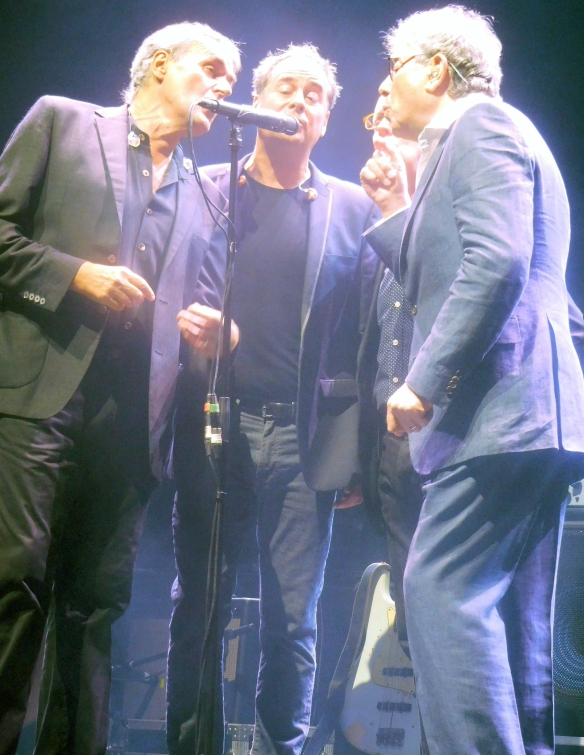 “oh-oh, Donna waiting by the telephone…”

And then finally the audience were all on their feet for “Rubber Bullets” which is perhaps Jailhouse Rock told from the perspective of the governor and the guards. Great energy, great showmanship if marred slightly by a self-indulgent conclusion rather than letting the song come to its own natural finish. 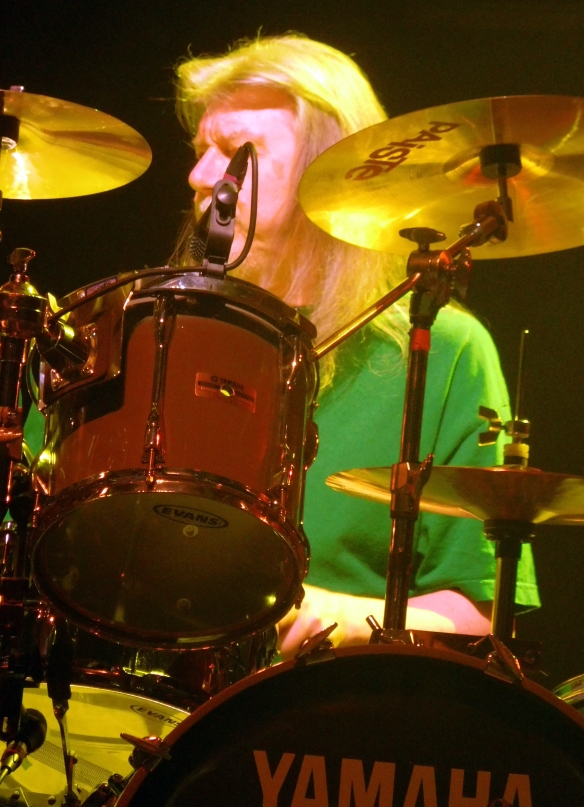 So 10CC a band that are very much worth exchanging your buck for a ticket and much more than just an oldies band. Why they don’t head back in the studio is an interesting question. Perhaps it has something to do with the relationship between the current members and the ex-members — and, crucially, the use of the name than it has to do with Graham Gouldman’s ability to write some more fine songs. But I’m only guessing and we might never know and we might just have to settle for shows like this as good enough and better than nothing. 10cc remain a convincing force in 2015.

1 thought on “From Sheet to Vinyl to Stage”