“The greatest damn Steely Dan band ever to come down the pipe”. So said Walter Becker on this “By Popular Demand” night at the Beacon. And you know what – in terms of live performance, –  I think he is just about right. This was an outstanding night of music. The “By Popular Demand” thing might just have been a cool cover-up: I’m not really sure what was so different from some other nights on the tour – but slightly dodgy promotional tools aside, this was a very, very good performance indeed.

The house didn’t fill up early and when the support act, the Peter Bernstein Organ Trio, took the stage, the venue was less than a third full. I’d been allowed to handpick our seats and having so much movement in my line of vision didn’t please those like us who were there to watch and listen. Indeed, some guys who had come to the show to tell each other how the day at work had gone got the sharper end of my tongue — but they were quieter after that. Peter Bernstein and his guys were okay (curiously for an organ trio, Bernstein, the standout player is the guitarist), nothing spectacular and after a short set they were gone leaving the stage to be set up for Becker, Fagen and their gang. 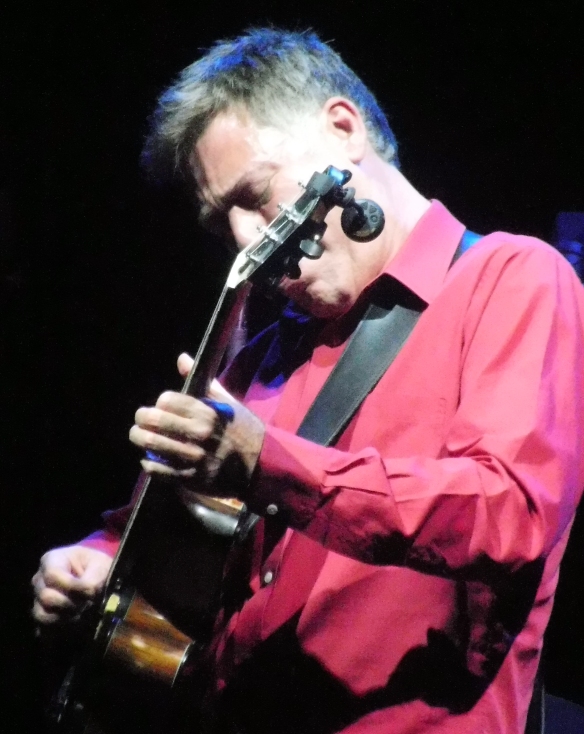 The Dan set opened with most of the band taking the stage to play Teenie’s Blues, an old Oliver Nelson number, which has been the regular opener during this tour. Toward the conclusion of this workout, the other musicians joined those performing to lead into a boisterous but not outstanding, Bodhisattva.

The energy really kicked in on the next number, Black Cow, which of all the songs performed on the night sounded closest to the original album version. This was perhaps because of the performance of the three female vocalists: Carolyn Leonhart, Cindy Mizelle and Paulette McWilliams (christened the Danettes for this particular jaunt around the States). Black Cow more than anything else this side of Babylon Sisters in the Dan catalogue requires deep earthy female voices and this trio are more than able to deliver — and so they did.

So the vocals were very much in place but it was for the next track, Aja, to raise the musical momentum even higher. The studio version of this is, of course, known for the contributions of Michael Omartian, Steve Gadd and Wayne Shorter which is a tough act to follow but the 2015 guys weren’t about to be left in the starting blocks. Particularly notable was a drum solo from Keith Carlock (who was a tour-de-force all night) and tenor sax work from Walt Weiskopf who took to the front of the stage to deliver his solo.

Next, we had Hey Nineteen which over the many years now has followed a tradition in the Steely world of being divided in two to give Walter Becker an opportunity to wax lyrical on the great virtues of the “Cuervo Gold” (even though he confessed to us that he had sworn off the drink). The second half of the song built to a crescendo with the trombone work of Jim Pugh which was again a notable highlight.

Jim Beard on piano was tucked away at the very rear of the right-side of the stage for these dates (behind Fagen and the Danettes) but what he lacked in visibility, he made up for in imagination and improvisation. He opened the next song with an extended solo which for a little while hid its identity before it opened up into the usual chords of Black Friday.

Indeed, it was the tendency of the band to allow everybody space to do their thing which is a tremendous strength of this outfit. If it was Beard on Black Friday then it was Jon Herington who stole the show with an opening solo on Don’t Take Me Alive which was in turns fiery and tender.

Next, Weiskopf came to the front of the stage with his alto which then opened out into a great guitar solo from Walter Becker (whose guitar had been pretty low-key in the mix until this point). The two solos led into a very, very different version of Showbiz Kids which is new for 2015. The rock’n’roll of the song is down-played but the funk is up and the vocal parts which previously overlapped are separated so you can tell your “Lost Wages” from your “Stars Come Out At Night” in a whole new way.

Another song which was fleshed out in a new direction was Godwhacker. The heart and soul of this number was Freddie Washington’s deep and rumbling bass work but many solos were overlaid over that bass. Fagen took to his feet with his melodica and took centre stage. Amongst the solos, Roger Rosenberg delivered some fine work on his baritone sax, Carlock had a BIG solo and then there was room for some work on trombone from Michael Leonhart who passed the number to Jim Pugh on his ‘bone who flipped it to Becker whose great solo brought it home.

The Danettes sang up a storm on Dirty Work which had some great muted trumpet work from Michael Leonhart. That Leonhart family sure is talented.

One of the lesser heard tracks from Aja (except, of course, on the Aja nights), is Home At Last and it was to this number the band turned to next. In this one, notables included excellent drum work from Carlock, a trumpet solo from Mr Leonhart and another fine solo from Becker. The number was brought to shore with a gentle, repeated chant of “Home at last, home at last, home at last” by the Danettes over a second solo from Walter.

Of course, there is the question of where popular demand lies in all of this as aside from Home At Last and Godwhacker there hadn’t been much here that couldn’t be considered a staple. Well, the two of the next three numbers threw the net a little wider.

First, there was Everything Must Go which was a real highlight and for more reasons than the rarity of its performance. There is something about the way that Fagen sings these days which is really notable but which I struggle to describe. It’s like his voice has become an element in the orchestra of sounds and that he is keeping pace with the instrumentation as well as singing the emotion and necessary annunciation of the particular lyric. I don’t know how he does this but listen – you’ll find it worth your while. Also here was the opening tenor solo for which Walt Weiskopf took centre-stage and a great drum solo in the bridge section of the number.

After this was the much more routine, Daddy Don’t Live in That New York City No More on which Walter Becker has been handed the vocals for the last several years. I don’t mind this but I’d prefer to hear Becker’s lead come on Slang of Ages or something from his solo repertoire like Hat’s Too Flat (it was even listed on the back of the t-shirt, dammit) or Downtown Canon, Circus Money, or….or…. I know some of those were in my popular demands but either no-one else agreed or no-one’s really listening… 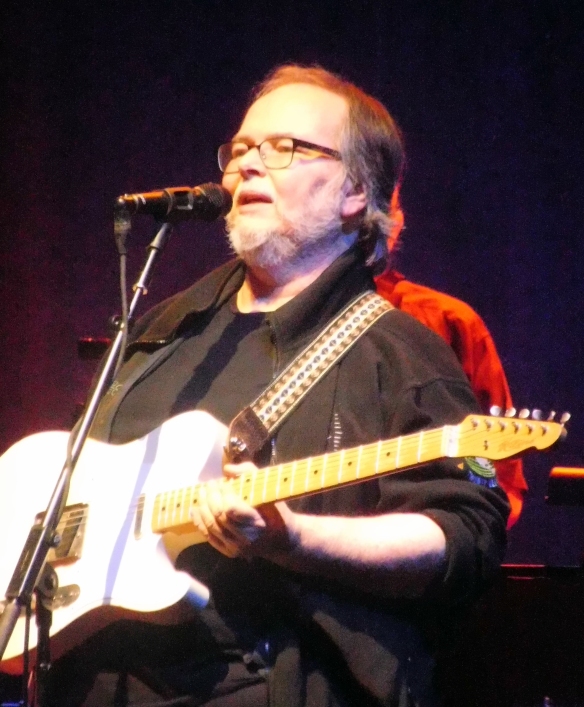 I mentioned that two of three were relatively infrequent performances and I guess the title track from Gaucho qualifies in that category. Certainly, the guy seated three seats from me looked like he died and gone to heaven … or just gone somewhere. Anyway, this was not only not an every night kind of song but a great, great performance led by outstanding vocals and it must be noted that there is something about the way that Fagen sang when he really has to think about the number he is performing. Gaucho opened with one of two Walt Weiskopf solos in this particular number. Weiskopf was on real form tonight which made you wish they listened to my obviously not very popular demand for West of Hollywood. Then there was a guitar solo from Jon Herington which led into some great drumwork from Carlock. Another drum solo brought the song to a close.

And on the drums…

It was that time of the night to cool things down and move towards some band introductions. The vehicle for this was the old Joe Tex number, I Want To Do Everything (For You) which has been covered a number of times so you probably know it from somewhere. The Danettes took what bits of the vocal were used and Becker introduced the band members in turn giving them an opportunity to show their talents. A guitar tech had been bringing Walter Becker different guitars for almost every number (Becker hardly moved all night). For this one, he brought him out a Gibson Flying V which looked so out-of-place, it was almost comical. Half way through the number it packed up and needed to be replaced.

Now all that remained was for a thirty minute trip down greatest hits lane which proved to be the most predictable part of the show since Bodhisattva, which seemed a time and a half ago. There was Josie with a nice solo from Mr Becker and then its companion piece, Peg. There was a journey back to My Old School and then the night’s regulation closer, Reelin’ in the Years which had some good guitar work from Herington and was brought to a crashing conclusion by Carlock on the kit.

The band did return for an encore of Kid Charlemagne which was most notable for the rousing harmonies of the Danettes who are a delight all of their own.

After that, all that remained was for Becker and Fagen to leave the stage whilst the remainder of the band worked through Nelson Riddle’s “Theme from the Untouchables” which Eliot Ness would have been proud of. It might not have been quite as cool as Robert Stack but it sure beat Kevin Costner into a cocked trilby.

I left not sure that Steely Dan could possibly top this — but promising to return tomorrow night to find out.