When I was at High School he seemed like the coolest guy on the whole planet.

After all, he was the guy who with Bernie Leadon was at the forefront of the original Eagles sound on their debut album and who once he had forged his songwriting partnership with Don Henley was responsible for so many of the best moments on “Desperado”, their second album.

Then there had been some great moments on “On the Border” before “One of These Nights” when the original band’s sound began to fragment and the Henley / Frey partnership began to steer the band in the direction it would go.

That part of the band were responsible largely for “Hotel California” and “The Long Run” another two of the most important records in my collection. Nobody else seemed to get “The Long Run” at the time but for me it was huge. 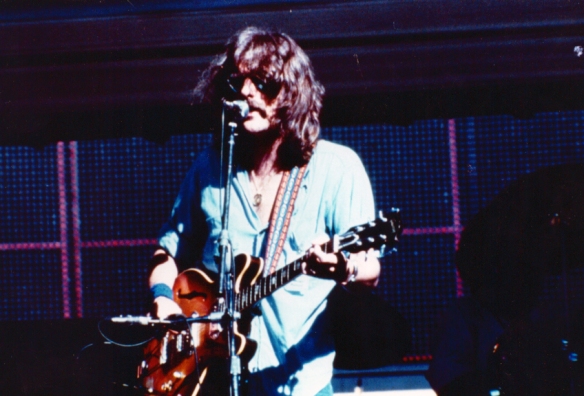 Yes, so to me, Glenn Frey was the embodiment of cool.

When he went solo that white suit on the front cover of “No Fun Aloud” bugged me a little but  I fell in love for the first time to the soundtrack of that album so in some ways I’m going to let him off the hook even for that one.

The rest of his solo career was not for me really. I began to get it again by the time he got to “Strange Weather”. He played London in support of that album but the show I saw was so middle-of-the road. He seemed to have lost his rock chops and he needed a new spark.

That new spark came with the Eagles reuniting. “Hell Freezes Over” and all that. I was in New Jersey, Paris and London for the shows on that tour.

The final disc which added to Glenn’s great output was the sometimes critically neglected final Eagles album “Long Road Out of Eden”. He renewed his songwriting partnership with Henley and showed his ability to interpret a range of other people’s songwriting on the gentle ballad “I Love to Watch A Woman Dance” and the edgy “Somebody”.

The final tour “History of the Eagles” now has a new significance with his death. The DVD that went with it was about as revisionist as the Eagles got with Henley and Frey carving out their official version of the Eagles’ story. What do I know? I wasn’t there but it all seemed a little uncomfortable and contrived.

Once upon a time he seemed like the coolest man on the planet in my reckoning.

And now he’s gone. Already gone. And it seems too soon.