The boys in blue-and-white hoops are here but this is not Loftus Road and this is not Queens Park Rangers. But we are in West London. No, this is Sparks, some 45 years into their career returning to the city that they say is their second home.

Sparks are enjoying their second summer of critical or commercial success. Strike that. Perhaps their third or fourth.

First there was “This Town Ain’t Big Enough For Both of Us” in 1974 and the album “Kimono My House”. That first flourish was followed by “Amateur Hour”, Get in the Swing”, “Never Turn Your Back on Mother Earth”, “Something for the Girl with Everything”: all served with Russell Mael’s high-pitched vocal and lithe movements and brother Ron’s menacing stare and trademark mustache and very still keyboard stylings.

A few years passed and just when it looked like their star had faded, back they came – teamed with Giorgio Moroder – and the hits “Number One Song in Heaven” and “Beat the Clock”. Ron’s hair and mustache was different and the keyboard sounds were from another world but the quirky lyrics were still intact.

There was a German Indian summer around the time of the “Gratuitous Sax and Senseless Violins” album and some American interest along the way but their British flag wasn’t waving again until the strong critical response that followed their “Li’l Beethoven” album in 2002 but deserved critical success that it was, it didn’t dent the album charts and their days of hit singles were in the past.

So now we turn to 2017 and someone in the hierarchy of something has decided this is Sparks’ year. Their new album, “Hippopotamus” debuted in the UK top 10 and whilst album sales required to chart are not what they used to be, this is no mean achievement. They are once again the critics’ darlings and all in the world of Sparks is rosy.

And so we come to Shepherds Bush Empire and what Russell tells us is a sort of homecoming (second home, that is…).

The show has all the trademark Sparks elements going on. Russell is buoyant and moves around the stage more than a man of his age should be capable of. 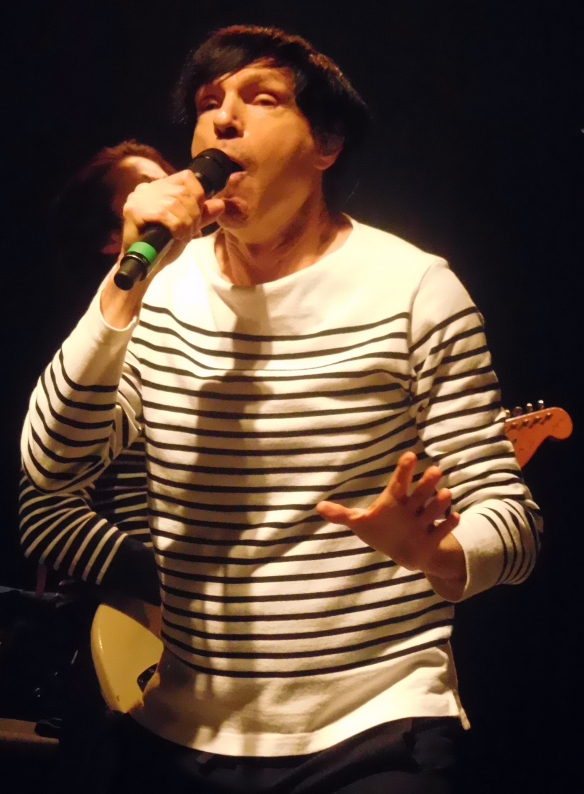 Ron has no such problems: stoic behind his keyboard with just a slither of mustache and hair that is a little thinning. We know that he is the genius behind so much of what is happening here but he would be way too modest to admit. He allows himself a little dance during “Number One Song in Heaven” which would have brought the house down anyway but is all the more noticeable because of his steady, unmoving, stoic presence the rest of the night. Here, he has no camera for his eyes to follow like they used to do on “Top of the Pops” so he is even more still but no longer disturbing because we are in on the joke.

One huge difference is that having being stripped back to a three-piece several times in recent years and even once been accompanied by an orchestra (40th anniversary of “Kimono My House” in 2014), they are now back to a traditional rock band formation as they were in their early years. The Mael brothers are very much ringmasters and centre of all that is taking place but they have surrounded themselves with a capable guitar / bass / keyboard / drums unit which fills out the sound for the new material nicely.

Hits? Quite a few of them are present. There is no “Beat the Clock” but as already mentioned we have “Number One Song in Heaven”. There is no “Get in the Swing”, “Looks, Looks, Looks” or “Something For the Girl with Everything” but we have “This Town Ain’t Big Enough For the Both of Us”, “Amateur Hour” and “Never Turn Your Back on Mother Earth”. No “When I Kiss You (I Hear Charlie Parker Playing)” but “When Do I Get to Sing My Way” is present and correct. I’d love to have heard “Change” and more from “Li’l Beethoven” but they will save for a day when there is less of a conventional rock / pop format to the shape of the band.

“Deep” album tracks from the past? “Propaganda”, “At Home, At Work, At Play” (from “Propaganda”) and “Sherlock Holmes” (from “Angst in My Pants”).

The rest of the evening was made up of tracks from “Hippopotamus” and this was the most thought provoking thing. I’m glad that they are making new albums and also that they have the guts to feature those songs so heavily in the show (8 or 9 numbers, I think). Some bands who have been around for a long time are being advised by their management that there is no point in recording new material. Nothing worse than a band just churning out the hits for the nostalgia market if you ask me. Some are afraid to play their newest material at a show in case it leads to an impromptu toilet break for a third of the audience. Thankfully, there are no such issues here. Sparks are made of stronger stuff.

My only issue is that I’m not amongst the number that thinks that this new record is the best thing since the proverbial. Now, don’t get me wrong I’m not saying that the Emperor has actually no clothes. It is good, no question and it is early days in listening to these songs. But for my money, for every “Edith Piaf (Said it Better than Me) or “Life with the Macbeths” or “Hippopotamus” itself there is a “What the Hell is it This Time” or “Missionary Position” which lyrically are not quite as sharp and witty as I expect from Sparks. They are a little obvious.

But none of this blunts the fact that this version of Sparks is a great live band and this tour is a triumph. Catch them while they’re hot!! 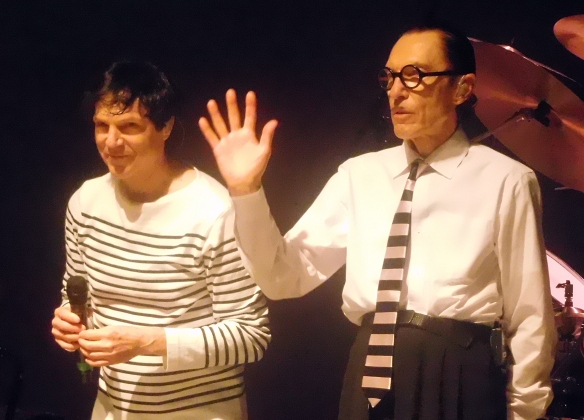