Who: The Doobie Brothers

Well, okay, it is a rather predictable title for a Doobie Brothers live review but I’m not going to be too hard on my self. After all, the Doobie Brothers are still, after all these years, most definitely rocking and they are on their way around Europe again so there is some travelling to be done.

The last time I saw the Doobie Brothers was on the very same night (29th October) 7 years ago, when they visited my home neighbourhood of Hammersmith. Tonight, it is a bigger show and they share billing with Steely Dan which was in my estimation a sublime coupling and I wasn’t wrong in my estimate.

Grumbles first just to get them out of the way. Both Steely Dan and the Doobie Brothers suffer from the same tendency. They have continued to record new albums – Steely Dan have had “Two Against Nature” and “Everything Must Go” in relatively recent years; Doobie Brothers have had “Brotherhood“, “Sibling Rivalry” and “World Gone Wrong” – but no tracks from any of these albums feature in the sets. That’s not to say that this is a “Greatest hits” night – there are some “deep” tracks on show here but all of them go back to those heady days of the 70s (with one Doobie Brothers exception). Also it must be noted that the venue curfew means that both bands have to cut their set time from what they might have played somewhere else. Not good.

But these are minor gripes for both bands played above and beyond what a casual visitor might have expected. This was a show of a rich and extravagant quality You can read the story of the Steely Dan set elsewhere ( Steely Dan – Still a Power House), but for now let’s concentrate on the Doobie Brothers.

Simmons has been part of every  configuration of the band. Indeed, with his long gray hairs, a shaggy mane, he looks like Father Time, the rock of the band who will stand as long as they do. 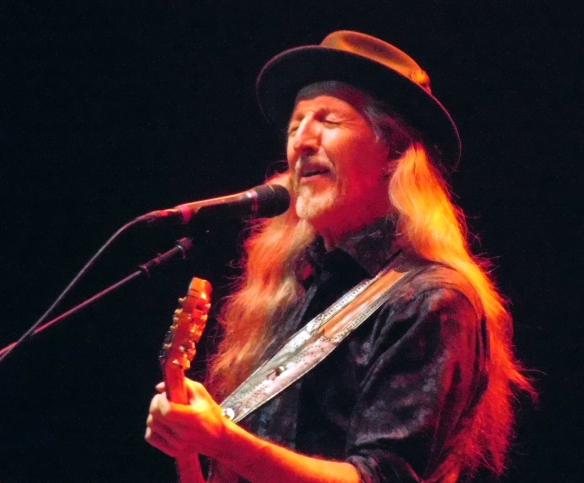 Johnston had ill health take him to one side towards the end of the 70s (a period which long term fans regard as the Michael McDonald years and led to their most commercial successes). His return on their reunion album “Cycles” has led since then to a sound much, much closer to the original conception. His role includes stirring the audience. He is a small ball of energy: gesturing and clenching his fist between songs. The security is not going to allow much dancing tonight but Johnston would get the audience on their feet to a man (or woman) if he could.

McFee didn’t join the band until the final album of their original run: 1979’s “One Step Closer” – he wasn’t around for the first group of reunion albums, still being in his own band, Southern Pacific, but he had come back on-board by the time of the aforementioned “Sibling Rivalry”. His accomplished fiddle playing gives another edge to the band on the songs that have a country lilt. Cowan was originally in New Grass Revival and later played with Simmons in a couple of bands. He hasn’t yet played on any of the Doobie Brothers studio albums but has had a couple of periods in the touring line-up; finally taking over when Skylark (previous bassist, who appeared on their Live at Wolf Trap album) suffered a stroke. His vocals add an additional element to the band and he is a great choice for this role.

The live band is rounded out by a very solid drummer in Ed Toth; Marc Russo who brings some great sax solos to tonight’s proceedings and Bill Payne who has previously played in Little Feat and who is given the spotlight with two compelling keyboard solos. 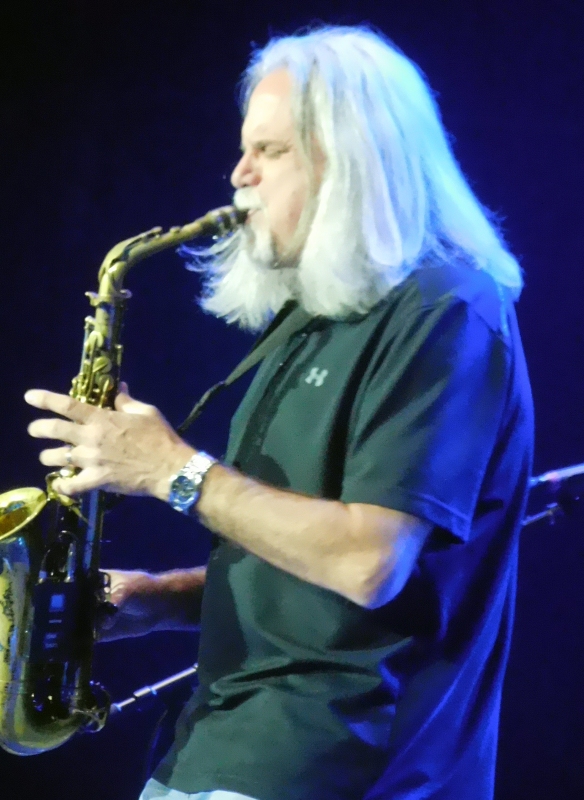 There are a number of tracks here that you wouldn’t recognise if all you owned was a Doobie Brothers’ Greatest Hits cd. From “What Were Vices are Now Habits” comes “Spirit” and “Eyes of Silver“. “Dark Eyed Cajun Woman” and “Clear as the Driven Snow” are taken from 1973s “The Captain and Me“. We are also offered “Sweet Maxine” from “Stampede“. On tonight’s evidence, it is Johnston’s voice that is holding up the best of the bunch but Simmons is still no slouch.

And there are no shortage of chart hits and radio hits. As well as the two that we have already mentioned which we used at the beginning of the show, there is “Nobody“, “Take Me in Your Arms (Rock Me A Little While)”, “Black Water“, “Long Train Runnin’” and “China Grove“. None of these is just given a hits-by-the numbers treatment: all are fleshed out with energetic and imaginative soloing from a band who have honed all of this to a fine point. 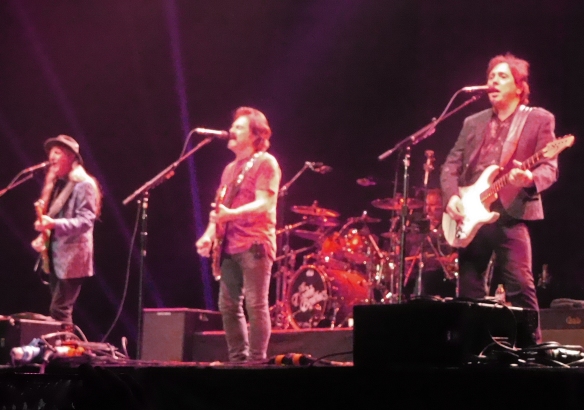 The only song left standing from the McDonald-era is “Takin’ it to the Streets” from the the album of the same name and this is handled well despite the absence of that errant Brother. The most recent song is “The Doctor” from “Cycles”. I read somewhere that Johnston is no fan of this one but if that is true, he is not letting it show -giving to it all the energy that he brings to the rest of the night.

“Black Water” and the final encore “Listen to the Music” are gifted to the audience as an opportunity for a sing-a-long. Now this isn’t always the easiest bet in a city you haven’t played for several years but there was no need to worry with the assembled crowd handling it with aplomb.

How long can bands like the Doobie Brothers and Steely Dan go on? I haven’t a clue but on tonight’s evidence it will take a lot to stop them. Long may run and continue to share their music and its wonderful heritage.

1 thought on “Rockin’ Down the Highway”