What: Twelfth Night by William Shakespeare

Who is the central character in William Shakespeare‘s Twelfth Night? In modern times it is very evident that Malvolio is regarded in this way. I’m not so sure that this should be seen as the case. The Malvolio story is one of a number of sub-plots in the story. In truth, I don’t think there is a central character. More than any other Shakespeare play it is an ensemble piece and it is at its best when three or four of the cast are on the stage together and playing off each other.

This is the real strength of what is a very good production of Twelfth Night which has just begun to play at the Royal Shakespeare Theatre in Stratford-Upon-Avon.

The temptation when casting Twelfth Night, of course, is to give the role of Malvolio to someone who is well known outside of the world of Shakespearean theatre and who will bring in the crowds because he (or recently she, Malvolia anyone!) is an appealing name playing a humorous part. No harm in that, but as much care must be taken in casting the rest of the cast. This has been done here and is another real strength of this production.

So who excels here? Well, as I have indicated these are actors who are thriving on the interaction of small groups but here are some examples worthy of particular mention. The pairing of Sir Toby Belch (John Hodgkinson) and  Sir Andrew Aguecheek (Michael Cochrane) are better together than any pair I have ever seen in these roles and I have seen more than my share of Twelfth Nights. 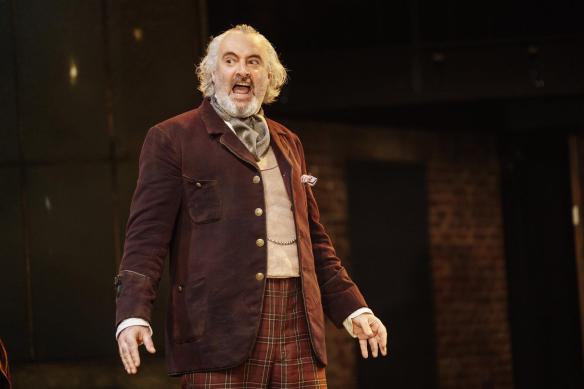 When they are joined on stage by Maria (Vivien Parry) and Fabia (Sarah Twomey) the recipe gets even richer and the humour really rises.

Kara Tointon as Olivia is also very, very good as she gradually melts from assumed mourning to expression of love.

But perhaps the prince of the piece is Beruce Khan as Feste, the fool. He interacts with everyone he meets beautifully and places just the right weighting on his humour – particularly the more subtle pieces – which makes you think carefully about what he is saying. This is just right for a Shakespearean fool. 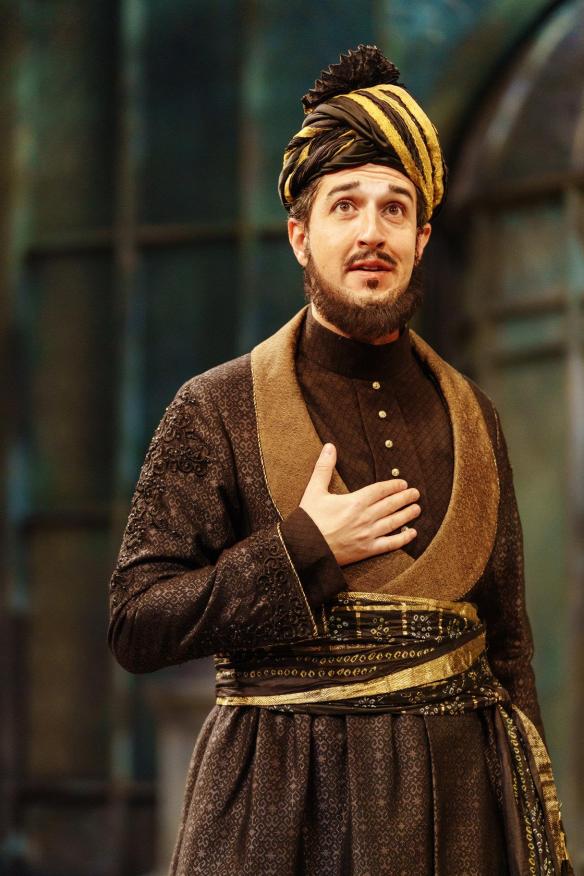 Viola (Dinita Gohil) and Sebastian (Esh Alladi) make the grade if only just with Ms Gohil perhaps being the stronger.

And what of Malvolio? Well, Adrian (Ade) Edmondson, of The Young Ones and Bottom fame, holds his own and is stronger after the interval than before. In the scene where Malvolio finds the letter he assumes to be from Olivia, he is a little over-matched by the talents of Messrs Cochrane and Hodgkinson and Ms Twomey. However, in the yellow stockings, cross-gartered scene, he begins to come on strong. In fact I suspect that he is less of an ensemble player than the rest and in the latter scene is more able to bring his solo skills to the fore. He will, of course, get the loudest applause and cheers. He is the better known personality, in the more obviously funny role and the curtain call allows him to enter last to receive the audience at their climax.

Other strengths? The staging is a marvel to behold if a tad indulgent. Sometimes just because you can afford to do it, doesn’t mean you should. Also, the quiet scenes set in the train station are a nice antidote to the constant effervescence of everything else with its frenetic pace.

Weaknesses? Some of the music (which the programme informs us is performed live) is a little over-amplified and drowns out the spoken and sung word.

The dancing and musical pieces are very good on the whole (if there might be a few too many – I for one could have done without all the reprises of “Hey Robin, Jolly Robin” which is the only flaw in an otherwise immaculate performance by Beruce Khan) but the final medley is a little overcooked. It leaves a taste of having just been to see a filming of the old BBC Show “The Good Old Days”. 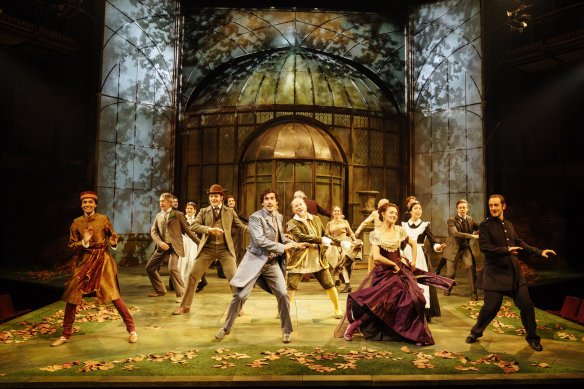 Also, it must be mentioned that our director and artistic director have found the homo-erotic undertones in Twelfth Night a little too readily. In the play, there is mistaken attraction because of a woman dressing as a man which the audience is meant to find foolish and humorous. Here this means that the character of Orsino becomes feckless and inconsistent and tawdry as he is genuinely attracted to one sex and then another. One minute he is painting Curio semi-naked and caressing his hair, the next he is declaring his love for Olivia. Later, we see him making eyes at Cesario and kissing him before sending the “boy” off to further declare Orsino’s love for Olivia in almost the same breath. 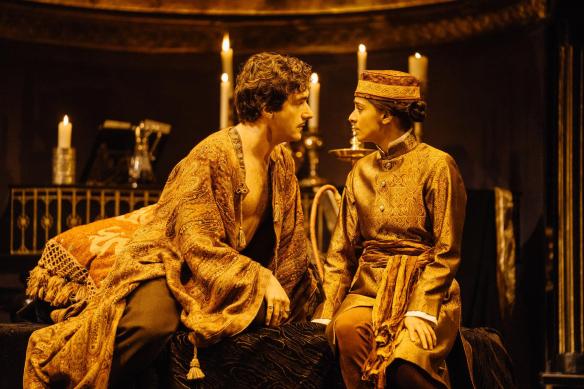 Ironically less is made of Antonio’s love for Sebastian who he declares he “adores” so. The tendency in 21st century theatre is to read back into older plays, modern understandings of the word “love” which put on it more weight than it can bear. Even the recent performance at the National play had to introduce a female steward in order to find a little same-sex longing. This production has no such difficulties – but at least we don’t have to endure Sebastian finding the Elephant that Antonio has recommended to him  is in fact a gay bar where a transvestite sings a well-known speech from “Hamlet” as a diva-style ballad. All very confusing but these are confusing days.

All of this leads to a paper thin closing scene where each of the central characters reaches out to someone other than the one which the actual text has given him/her as his final partner and these beckonings inevitably go across the sexual lines with, for example, Olivia still wanting Viola even though she now knows her true sex and has pledged to marry Sebastian.

So just as Scene 2 precedes Scene 1 at the beginning of this play, there are many other areas where this production is a little twisted from the original text.

But so much of this is minor gripes and just brings out the Shakespearean academic in me. In truth, the majority of the audience will not be concerned with these things but will have come out to see a production of Twelfth Night which is hopefully a rich, humorous, attractive and colourful romp. They will not be disappointed in any of this. It will give the audiences a truly fulfilling night out at the theatre.