What: Romeo and Juliet by William Shakespeare

A mid-season visit to the RSC’s latest interesting adaptation of a Shakespeare classic.

This is the catch word that almost every RSC production screams at you as soon as you enter their building in its quaint setting along the River Avon.

What does Shakespeare have to say to today’s world and its issues?

It begins when you hand over your shekels and receive your programme for the night’s entertainment.

The Romeo and Juliet programme has three essays. If you have arrived early enough to peruse them before the play begins, you will learn more about the production you are going to see than you would if you spent a few well spent hours reading the Arden text of the play before you left your hotel.

You would begin with “With This Knife” by Patrick Green which tells us that this classic play is as much a study of knife crime as it is about love. How did we get it so wrong for four hundred years?

The second “Queering the Pitch” (you’ve guessed where this is going, haven’t you?) tells us about the gender issues in the play and why Patricia Whyman (the director) has decided to recreate some of the male characters in the play as female.

The third “Two Households” by Emma Whipday is an exemplary piece of scholarship about why this play was ground-breaking in its day and why if properly understood has so much to say today.

If only the production had rested its weight on the third essay and not on the first two then I would have had a much better night at the theatre. As it was, things seemed rather miserable.

Here’s what I saw:

Confused gender: By my reckoning, at least 4 characters who, by my honest judgement, needed to be acted as male roles were played by females as females. Now I understand the old argument that in Shakespeare’s day female characters were played by boys and this re-casting balances what happened then. The flaw in this argument is that those young male actors were performing female roles as females and here we have female actors transforming characters’ gender in a way that makes their part in the play incoherent. This is best shown by turning to the recent review in the Guardian of this particular production. Now the Guardian is not a bastion of conservative Shakespeare or conservative anything else but their reviewer said, if I might quote:

“The casting of Charlotte Josephine as Mercutio raises a host of issues…  The performance is perfectly enjoyable, but left me faintly puzzled. Even if Mercutio aspires to be part of a laddish culture, would she engage in such rancid sexist abuse of Juliet’s Nurse or react with such hostility on being told that she “consorts” with Romeo? I welcome gender-fluid casting but, since Shakespeare’s play is an attack on the destructiveness of male violence, is there any gain in casting one of the key knife-wielders as a woman?”

Michael Billington, The Guardian, May 2018 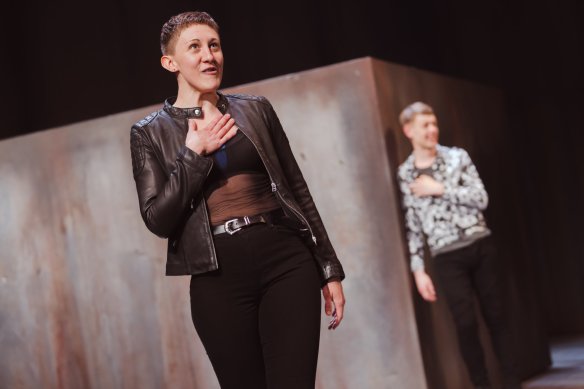 It doesn’t make sense. The Prince of Verona (referred to throughout as the Prince) is played very well by Beth Cordingly but her character is clearly a female at the head of the kind of patriarchal society where Michael Hodgson’s Capulet can treat his daughter as chattel and threaten her with violence if she does not correspond to his heavy-handed will. Friar John, a Franciscan priest, junior to the more central character of Father Laurence becomes Sister John but the character’s gender switch adds nothing and it just seems peculiar that you have a female in an historically all-male order. Better perhaps to leave alone or if we must have change for change’s sake to make the character a nun.

Even less worthwhile is the change of gender of Gregory from the Capulet household. Played by Donna Banya and still called Gregory, the actor is a little out of her depth and sounds rather like she is reading from a script she has hidden about her person.

Confused sexuality: Romeo has two principal friends within the play. One, Mercutio, as already noted, is now a female. The other, Benvolio, we are told in the programme’s opening two essays is rather confused. Erica Whyman says that “Benvolio’s deep love for Romeo, for example, might be easier to own in 2018, but in a world of machismo and street violence it remains hard for him to be himself”. I assume we are to understand from this that Whyman’s Benvolio (played by Josh Finan) is homosexual. I have to be honest that if this wasn’t being pointed out to me in the essays, it would be far from obvious from what I see on the stage but other reviewers have seen it much more clearly than I.

Now this illustrates a problem. When today’s critics and directors come across any use of the word “love” between two people of the same sex whether it be two characters of a Shakespearean play or two actors in a Hollywood movie of the ’50s. They don’t know what to do with it. Or rather they do. It must be a reference to homo-eroticism. I’m still chuckling from a book on film I read a while ago that went to great length to explain the concealed homo-erotic relationship between comedy partners, Dean Martin and Jerry Lewis. I would have loved to have seen the author try to explain that to Mr Martin and his Italian machismo when he was younger.

But here we have two cousins who love each other and therefore since Romeo is clearly (I think) heterosexual then Benvolio must be a repressed homosexual. I can remember days when the word “love” could have broader definitions and I suspect Shakespeare could too.

Confused language: Romeo and Juliet is written in unrhymed iambic pentameter (blank verse). Whyman’s Romeo and Juliet is quite often delivered in a gabbled English where the meter seems beyond the actors’ skills. This inhibits even the senior cast members like Karen Fishwick who plays Juliet and Mariam Haque as Lady Capulet. 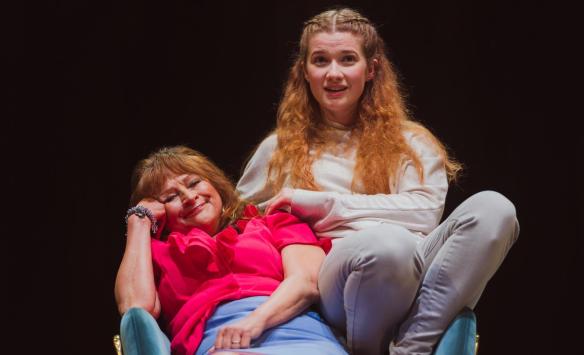 Also struggling on the language front is Ishia Bennison (Juliet’s nurse) who seems to have parachuted into the production from somewhere akin to a Yorkshire character in TV’s Benidorm. Now this might be a good thing if she always delivered up the light relief this is obviously meant to bring but too often she falls woefully short.

Finally, the confusion extends to those gender changes. The text is altered to make sure that Mercutio is always referred to as a female but not so in the case of Escalus. The Prince is always male. There must be some logic in this but it is lost on me. 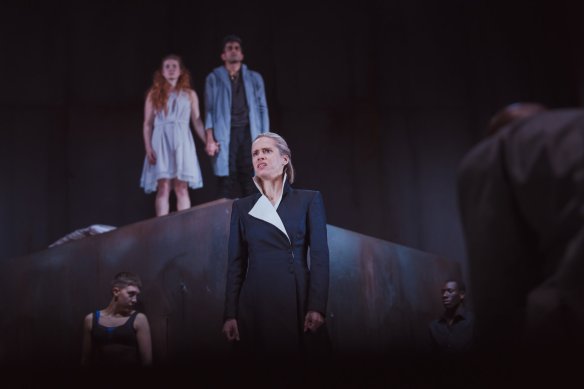 Confused physicality: We have already touched upon this, in the area of this review where we quote from Mr Billington’s Guardian article, where we think on the incongruity of the female Mercutio’s appetite for violence and unwanted forced kiss on the lips delivered to the character of the Nurse but the determination to show how prevalent violence would have been in this society is pressed too hard in this production. One scene that emphasises that, is the naked aggression that Romeo shows toward Friar Laurence at one point which extends to laying hands on him (not in a religious sense!!) – surely something that even the lowest citizen would blanch at when directed towards a holy man!

Confused Music: At the masque ball where Romeo and Juliet meet, a band set up centre stage with two lead guitars, keyboards, and drums. They deliver a melange of ’80s rock, drum ‘n’ bass and dub. Like the play, it is not sure what it needs or wants to be and just seems all rather pointless.During these moments you are also going to witness and endure some of the worst dancing that any paid company has managed to ever concoct. 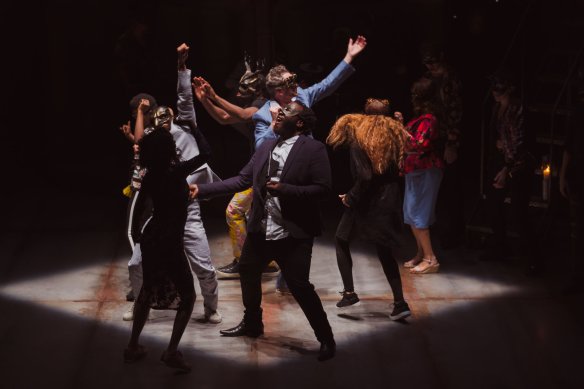 Confused prologue: The idea of having a whole group of actors deliver this prologue is quite clever if not particularly original. But then the lines are repeated over and over again, criss-crossing one another until you have lost the sense of it all and can no longer hear the words. A paying customer near me said at the interval that it just sounded like blah-blah-blah but then she said “I guess I’m a dinosaur when it comes to Shakespeare…”

So are you suggesting, Mr Reviewer, that there is little that should make me wander towards the theatre to see this production, either in its current Stratford-Upon-Avon run or when it transfers later in the year to London?

Indeed, I am! Some of the cast are good in parts. Michael Hodgson, who is excellent as the Porter in the current RSC Macbeth, is very good in the scene where he demands loyalty from Juliet but is lukewarm in the rest of the play. He would be better seen in Macbeth. Karen Fishwick as Juliet, gives a great physical interpretation of the role with wonderful body language but too often the sense of the words is lost. Bally Gill’s Romeo is tolerable but no more than that. Perhaps best are Raphael Sowole as Tybalt and Andrew French as Laurence but there is no-one here good enough to carry the rest of the burden of this mess of a production.

Your time would, indeed, be better spent at Macbeth – which I reviewed here:

As in my title, borrowed from Mr Shakespeare, this play is dull. Not dull in the sense of uninteresting or unexciting but dull in its failure to understand its very self — and that is a real failure.