The last time I caught up with Perkelt, they were a six-piece band, all from the Czech Republic and dressed in Mediaeval outfits. Now they are a three-piece and their appearance is Gothic but more in the Camden town sense than in any attempted historical reproduction. 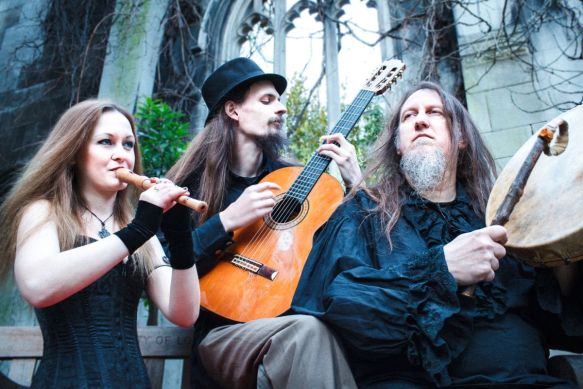 With Stepan Honc and Pavlina “Paja” Bastlova still at the heart of the band but now joined by an American, Will Connor on assorted percussion, their sound is changed. It is a little more stripped back and basic. Ms Bastlova has to become the lead instrument or vocalist on all their tracks which rather limits their range as Stepan and Will become a rhythm section.

They’ve also re-located from the Czech Republic to Fulham – which makes gigs a little easier to get to, I guess. So, we went along to see them at the Suffolk Punch in that neighbourhood, looking forward to catching up with them but with a little trepidation. Trepidation because, for me, their third album “Dowry of a Troll Woman, the first to feature the trio, is their least satisfying. The production seems a little hurried. Pavlina’s vocals seem a little harsh in places and the sound is a little more repetitive – and some songs are rehashed from their first album. Don’t get me wrong, it is a good album but it could have been better. Three line-ups in three albums is not ideal. Now they need to transfer this to the live setting. How would it work out?

Pub gigs are difficult because by the very nature of the venue not everyone is there to see you. In fact, some may feel that your music is imposing on their conversation and their drinking time. It’s a challenge. But it is a challenge that every small band goes through these days because it is difficult to find an opening at the next level and Perkelt are somewhere betwixt and between at the moment – playing pubs but also festivals and slightly larger shows.

So what’s to report? Perkelt played two sets with the two halves weighing in at just a little under two hours (including the interval) which was just about right. By the end of the night, more of the venue was concentrating on the music and the rhythm, which is about as much as you can hope for in a pub setting. With a small but enthusiastic crowd who had come along purely for the show, they were granted an encore, which signifies a late winner for the away team.

The first set opened with “Herr Manelig” from the new album which found Paja sounding a little nervous on vocals and the band not really having settled into its groove. The instrumental “Pilgrim” was marginally better and gave Miss Bastlova a little time to settle into a comfort zone with some effective work on the woodwinds and great rhythm guitar from Stepan.

The show really took off though from the third number “The Willow Song” which is a co-composition from Perkelt and that noted lyricist, Will Shakespeare from a play called “Othello” which just might catch on with a little more exposure. The music is heartfelt, the lyrics beautiful, and the vocal gentle, tender and understated.

The band then move through “Quen A Festa” from the new album and “Benedetta” from “Musica Mardania”, their second record – which for my money is their best recording to date.

Also from that album comes “L’Homme Arme” and by now I’m remembering why their instrumental endeavours, particularly the interaction between Honc’s guitar and Bastlova’s recorders remind me of Anderson and Barre’s synthesis in Jethro Tull.

The first set closes with “Santa Maria” which is another stirling workout for Pavlina’s vocal chops and a great showcase for Will’s percussion.

As the second set progresses, it is clear that Perkelt have more and more of their audience’s sympathy. One of the highlights here is “If My Complaints” from “….. Troll Woman” which has lyrics from John Dowland and dates back to the 16th Century.

The band noticeably loosens up during this set and this allows a brief percussion solo from Mr Connor and a little more space for Mr Honc. This is something that the group really needs to work on. More improvisation, more soloing, more space for the individual members of the group to explore variations and changes in the scheme of the compositions. These numbers shouldn’t be set in stone but sometimes they sound too much like the studio recordings. They need the willingness to allow the tunes to grow on stage and see where that takes them.

The show closes with “Quen A Omagen” from their eponymous debut set which is followed by that encore, a reappearance of “Santa Maria” from earlier in the show which doesn’t sound too much like we last heard it only an hour ago.

So all-in-all, a good night for Perkelt and for all the elements of their new line-up. But they need to be conscious that with the smaller number of instruments available, they have to some degree, gone from Poker to 3-card brag and that the former inevitably allowed for more variation and, therefore more possibilities. Time to play the improvisation card guys, if you want the public interest to grow.