Who: Ian Hunter and the Rant Band

Who Else: Graham Parker and Brinsley Schwarz; Sitting Pretty

Well, who thought we would still be here? The ongoing wonder of Ian Hunter’s career and the dedication of his fans enters a new era. After the rave reviews of his new album “Fingers Crossed” in the music press, Mr Hunter has a new impetus (not that he seems to have needed any) to reach fresh mountain peaks in his career.

It’s 2 years and one month since Shepherd’s Bush and the lead singer of Mott the Hoople last met. Since then this venerable old venue has undergone major surgery, a period of closure and is now a largely seated venue. Ian, on the other hand, has a limited edition box set which embraces his whole solo career, the aforementioned new album and still one of the best set of pipes in the business. There is little question who is holding up best.

What about the support acts? A distinctly mixed bag. Sitting Pretty are a young Mancunian band with a liking of heavy rock. A decent vocalist even if his mannerisms did seem to have been borrowed from an aging VCR of his Dad’s favourite bands. A gifted lead guitarist. But a paucity of songwriting ideas and a distinct lack of melody. Sitting uncomfortably at the bottom of the wrong bill might have been more accurate.

Melody was not something Brinsley Schwarz and his long-term leader, Graham Parker lacked. Opening with “Fool’s Gold” and going through stopping points at most of the Rumour’s back catalogue until they reached “Hold Back the Night” and “Don’t Ask Me Questions”, this was a performance strong on guitar (Schwarz on lead electric, Parker bringing some more acoustic flavours). However, because this was a duo performing songs best known in a context driven by an aggressive rhythm section, tonight lacked a little oomph. It was pleasant. Parker looked a little like that old Physics teacher you used to have. But it was no more than that. A fond memory of old times to make you go home and dig out the old albums. Parker and the Rumour also have a career embracing box set for those of a mind to do just that. 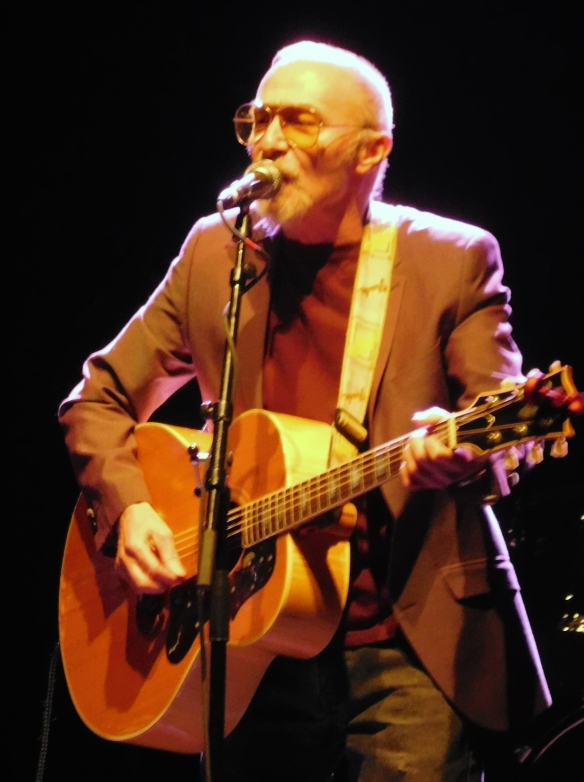 If Graham Parker doesn’t look quite look the rock star he did back in the day, Ian Hunter has lost none of that visual edge. He is still scrawny; there’s not an ounce of wasted meat about the man. In a three button tee and drainpipe jeans, he drove his band as hard as ever and whilst not quite a triumph, this was a great show.

If there was a weakness, it was that on the songs where Mr Hunter moved from centre stage to his keyboard, the keyboard sound which should have been leading sometimes got lost in the mix. This was particularly evident on “Honaloochie Boogie” and some of the newer numbers that were inserted during a section about the middle of the set. 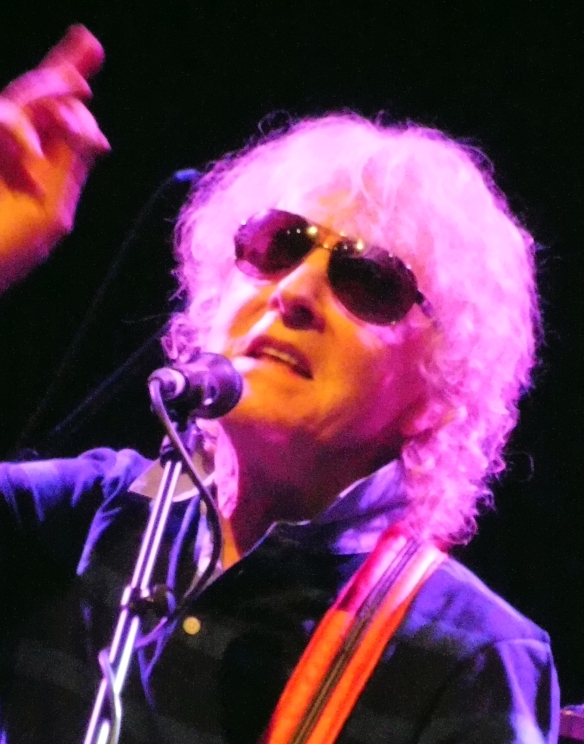 But this is a small gripe and a testament to this performer and songwriter’s ability was how well the new ones held up alongside the classics. The night opened with “That’s when the trouble starts” and other new ones sprinkled in included “Ghosts”, “Dandy” and the title track of the album which excelled.

“Something is happening – Mr. Jones
My brother says you’re better than the Beatles ‘n’ the Stones
Saturday nite ‘n’ Sunday morning
You turned us into ‘Heroes’ – can you hear the heroes sing?
Dandy – you’re the prettiest star
There ain’t no life on Mars
But we always thought there might be”

A song like this which relies so much on lyrical ideas from Bowie’s songs manages to avoid sounding at all hackneyed and this was one of the great tributes of the night as Ian recognised his place having worked alongside the industry’s greats. His tribute to Mick Ronson (“Ronno” as he shouted at the end) was out there too in “Michael Picasso” which was one of the best songs of the night.

For those who didn’t know too much about his solo career, there was a smattering of Mott with “All the Way to Memphis” and “All the Young Dudes” (with Graham Parker on harmonies) and the solo hit, “Once Bitten, Twice Shy”.

As we spilled out onto the streets of Shepherds Bush to walk home, it was to reflect on another fun night with Mr Hunter. Long may his roadshow roll.