What: Titus Andronicus by William Shakespeare

Where: The Royal Shakespeare Theatre, Stratford-Upon-Avon,

Who: The Royal Shakespeare Company (RSC)

The RSC’s current production of “Titus Andronicus” is a bloody mess.

And that is both a good thing and a bad thing.

“Titus Andronicus” is meant to be violent and bloody and the RSC have achieved that with great aplomb.

However, “Titus Andronicus” is meant (in my view) to be macabre rather than comedic and here too much is played simply for laughs.

This production opens with scenes that are a kind of “West Side Story” meets “Occupy Democracy”. It is an utterly predictable way to try to root this centuries old play in today’s social discord and frankly we have seen this kind of thing in too many modern renderings of Shakespeare for it to be in any way impressive or thought-provoking. But just in case you didn’t get the hint there is an essay in the programme which spells out Titus’ relevance for 21st century England.

So let’s just forget about the false start and move onto the play proper. The opening speeches see Roman “politicians” fighting for control of a lectern and consequently of the populace’s opinion. It is unclear why the director felt it was a good idea to put a live microphone on the lectern. One could have been there just as a prop and it would have meant that voices were much more clearly heard in some sections of the theatre and there would have been less technical problems. Strike two!

But then the quality of the cast and the natural development of the tragedy within the play saved the day. From the moment, Titus declares that one of the sons of Tamora, Queen of the Goths, will be sacrificed as a memorial to Rome’s great victory then the great revenge element within the original play is allowed to breathe and so much of what is here becomes a triumph.

A number of years ago, I wrote a series of essays about the notion of empire within “Titus Andronicus” and the way in which once the moral core which allowed a great state to develop is decaying then that society can no longer stand. This was the story of Egypt, Babylon and it was certainly the story of Rome as Augustine pointed out in his magisterial opus, “City of God” and it is at the heart of Mr Shakespeare’s play and when the RSC bring this to the fore – well, then all is well. 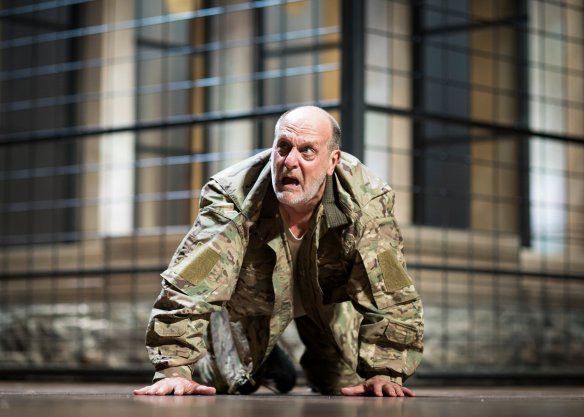 It must also be noted that there are some great individual performances too which may well have served the day anyway. David Troughton as Titus, himself is wonderful, larger-than-life and truly accomplished. Martin Hutson who is tremendous in the current “Julius Caesar” may not be quite as convincing here but he still makes for a very good Saturninus. Speaking of convincing, Nia Gwynne is believably wicked as Tamora.

Another giant of a performance is delivered by Hannah Morrish as the broken, molested and dismembered Lavinia. She goes from ebullient and full-of-life prior to her assault to broken, empty and detached after the rape. This is an extraordinary piece of acting.

The second half loses its way a little again when the comedy returns. Titus’ insanity is made too light-hearted to be convincing and his scenes opposite Revenge, Rapine and Murder lose the weight of the tragedy which still ought to be present.

So, so many good things but also so many things that have slightly lost their way. When the play is allowed to rest on the quality of the play and of the actors, it works. When it leans too heavily on the stage props and scenery, it does not.