Commemorating the life of Alvin Stardust, I think I heard somewhere that tributes were being sought for an event which is to be held in the town of his youth, Mansfield. The suggestion may have come from Dave Harness who functioned as Alvin’s road manager during the latter part of his career and who I count as a friend but, anyway, I read it somewhere. It got me to thinking on what I’d want to say.

I can’t be at the opening day of the event because of a writing commission which is going to take me to New York for a month, but I hope to visit it thereafter, but I thought to gather my thoughts here and now.

I’d written an obituary of sorts about Alvin at the time of his passing which can be found elsewhere on the internet including here:

which covers his career in broad-strokes, so maybe something about my inter-action with the man.

Back in the mid-90s my agent rang me and asked me if I would be at all interested in interviewing “an old glam rocker called Alvin Stardust”(!) while he was on tour and specifically at his show in Croydon at the Fairfield Halls. What my caller didn’t realise was that when I was 9 I’d seen Mr Stardust on Top of the Pops and become convinced that he was the coolest man in the world. It was a moment that has affected me right to this very day and I guess I knew from that moment that I’d be forever “dressed in black” myself. 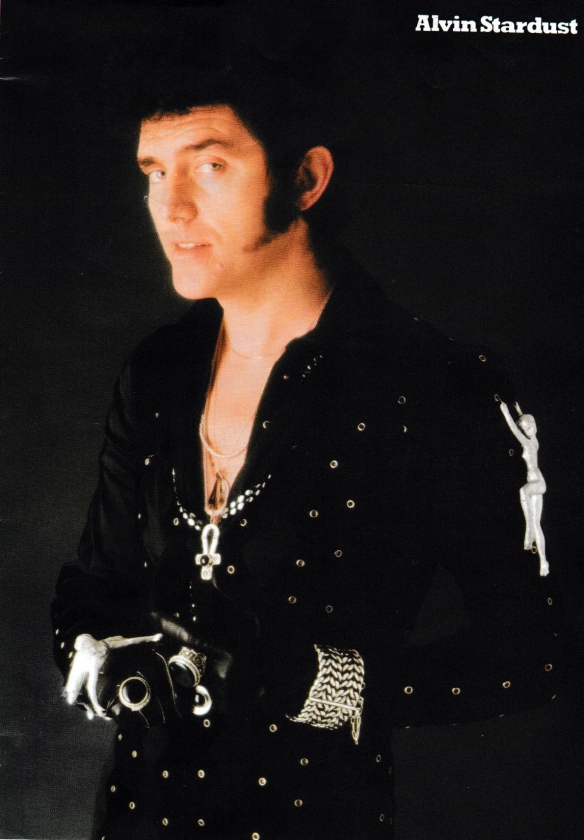 The writing commission wasn’t an easy one. It came with requests from three publications. The local Croydon newspaper wanted a double-page spread about Alvin’s career to coincide with a review of the gig. A religious publication wanted some material on Alvin who some time before had been quite vocal about Christianity but who had become much quieter about that following some very difficult press he had received following his divorce from Liza Goddard. There was also a rock music magazine who had seen Alvin on “This Morning” talking about attending an Eagles show and who wanted to explore his musical tastes outside of 50s rock ‘n’ roll. This one had an added advantage for me since at the time I was involved in writing and editing a publication for Eagles fans so if the interview went well there was the possibility of a fourth piece. 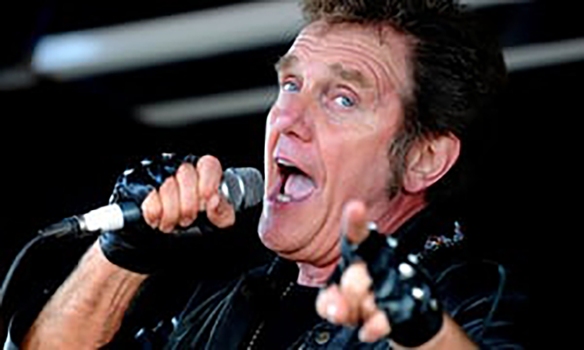 However, aside from meeting a real hero, I had a second reason to be nervous. As well as being a professional writer, my day job had changed a few years before that date. I’d become a Christian minister and I felt a little like someone going into a situation with lots of excess baggage – I wasn’t at all sure how that one would go down.

To further complicate matters, things had taken a twist on the domestic front and I found out on the day that if I was going to do the interview I needed to take my four-year-old daughter, Sereyna, with me. Mmm…

I contacted Flying Music who were in charge of the tour and they understood about the Sereyna complication and that was fine. I arrived at the stage door several hours before the show and was presented with my Access All Areas pass and left to wander around. We ran into Suzi Quatro who was also on the tour bill and we chatted informally for a while and then after a stroll around the theatre to get my bearings, I was ushered into Alvin’s dressing room – to find he hadn’t arrived. 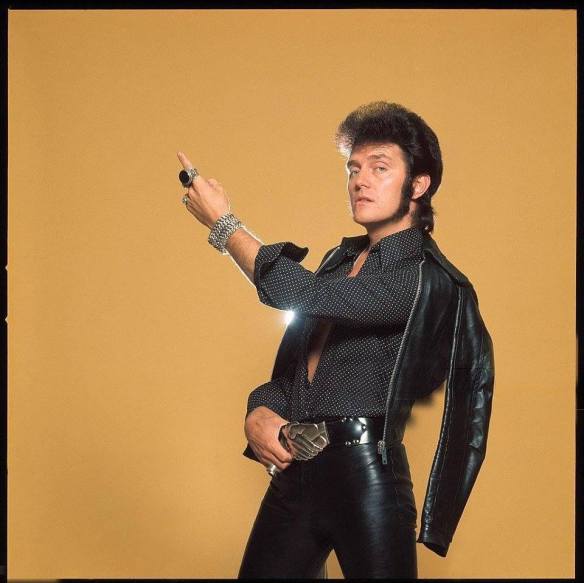 10 minutes or so later Alvin and Julie (his wife) arrived and I could hear some brief words outside the door. Alvin: “There’s a guy in there”; Julie: “Yes, he’s here for an interview but it’s okay, he’s like Steve (Flashman, A Christian minister and musician, who was a friend of the family and who had done some TV with Alvin). Ah! Time to relax a little.

In come Alvin in street clothes and Julie already in her stage gear. Introductions, handshakes etc.. Alvin took a swift look around and then headed straight back to the door, saying that he had something important to deal with first and this would just have to wait. I’m getting uptight again.

10 minutes later, Mr Stardust returns with a can of soda and a bag of salt and vinegar from Walkers. He presented them to Sereyna and said, “pop and crisps”. My daughter looked at him with the same kind of admiration in her eyes that I’d felt watching his stagecraft on Top of the Pops performing “You, You, You” more than 20 years before. It took her a long time to get over the glow of that moment.

After that the interview went like a charm. We talked about a broad range of subjects for over an hour and then after a brief moment doing the fan bit of getting some autographs on a few things I’d brought along, it was time to go and talk to some fans who were waiting for the show to get more material for the articles.

I remember that while he was signing, Alvin said to Julie about the George Tremlett biography he was signing for me that he thought this was the one where the author had got most of his facts wrongs. I’m not so sure. It always seemed broadly correct to me.

After the show, things didn’t go so well. I wrote up my notes and got ready to submit them to my agent ready for publication. However, in the meantime I had a phone call from the guy who was then Alvin’s manager (I can’t remember his name, but I think Alvin parted company with him a couple of years later) who sounded anxious. He asked me to fax my interview notes to him. Now this was highly unorthodox but because it was Alvin I complied and 30 minutes later, it came back with red ink all over it telling me the things I couldn’t use. It felt like I’d just had my Physics homework marked when I was 16 – felt like I was back at school.

I protested that the notes were a verbatim account of what Alvin had said but the guy wasn’t going to be moved and frankly the heart and the soul had been ripped out of any possibility of making a worthwhile article out of the shreds that were left. It wasn’t a good scenario.

After that whenever I met Alvin, he was a little cautious. I couldn’t tell whether it was because he’d done a 90-minute interview with me and nothing had come of it or whether he simply didn’t warm to me on some level. Usually, it doesn’t bother me if someone doesn’t like me but the child in me really wanted to be like by Alvin Stardust.

The would-be article sits in my files unpublished. Some years later, I opened a theatre in London which had a broad remit for the arts. We discussed who to get for opening night. We wanted someone who could pull off a performance that could embrace more than 5 decades of popular music. Only one name came to mind. Alvin Stardust. We booked Alvin and then the opening of the theatre was delayed for technical reasons for nearly a year and by the time the theatre was due to open, we had other things in our calendar waiting to come in. So, Alvin never played there. I never asked him for his fee (which we had paid upfront) back. I don’t think he needed us to do that, but it seemed like a nice gesture.

One of the best moments of my life was when Alvin said “pop and crisps” to make my daughter feel special, comfortable and at home in a strange environment.

That was a measure of the man behind the black leather gloves and what kind of special person he was.